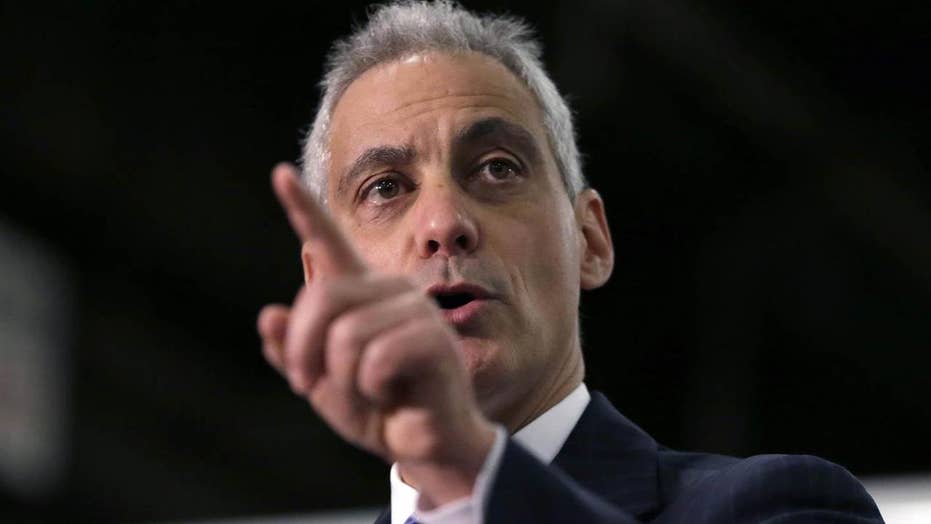 The Department of Justice on Sunday fired back at Chicago’s plans to sue the feds for threatening to withhold crime-fighting money to sanctuary cities.

Chicago Mayor Rahm Emanuel formally announced Sunday that his city would file a lawsuit Monday against the Trump administration for vowing to block federal grants to cities that don't comply with federal immigration law.

The Justice Department called out the mayor in its response. “In 2016, more Chicagoans were murdered than in New York City and Los Angeles combined. So it’s especially tragic that the mayor is less concerned with that staggering figure than he is spending time and taxpayer money protecting criminal aliens and putting Chicago’s law enforcement at greater risk,” department spokeswoman Sarah Isgur Flores told the Chicago Sun-Times.

The dispute centers around so-called Byrne grants for cities' law-enforcement groups. On Thursday, federal officials published an updated application for the grants, which Emanuel compared to “blackmail.”

Chicago is depending on the $3.2 million from the program to buy police vehicles. The grants are named in honor of former New York City police officer Edward Byrne who was murdered in 1988. Still, the grant is just a tiny fraction of the city's budget, The Chicago Tribune reported.

FILE - In this Jan. 25, 2017 photo, Chicago Mayor Rahm Emanuel speaks during a press conference where sanctuary cities, which don't arrest or detain immigrants living in the U.S. illegally, and Chicago violence, two issues raised by President Donald Trump, were discussed in Chicago. Emanuel on Friday, Aug. 4 said the city will sue the federal government in defense of its status as a so-called sanctuary city and against threats to withhold U.S. grant funds. Emanuel told "Connected to Chicago" on WLS-AM the city will be in federal court Monday, Aug. Aug 7 arguing grants can't be withheld from cities the administration says aren't cooperating enough with U.S. Immigration and Customs Enforcement officials. (AP Photo/Matt Marton, File) (AP)

“Chicago will not be blackmailed into changing our values, and we are and will remain a welcoming city,” Emanuel said. “The federal government should be working with cities to provide necessary resources to improve public safety, not concocting new schemes to reduce our crime-fighting resources.”

A requirement added to the application would force local jurisdictions to report to federal officials about the release of illegal immigrants from police custody at least 48 hours in advance.

According to the Sun-Times, former high-ranking Justice Department lawyer Ed Siskel, now Chicago Corporation Counsel, doesn’t believe Sessions has the authority to change the requirements of the federal grand program because it was created by Congress, and doesn’t believe he can force local law enforcement officials to comply with federal immigration policy.

Emanuel announced more details about the lawsuit Sunday, saying withholding the grants would violate the rights of Chicagoans.

Emanuel added, “The city of Chicago may be the first to bring a lawsuit, but I’m also confident we will not be the last.”