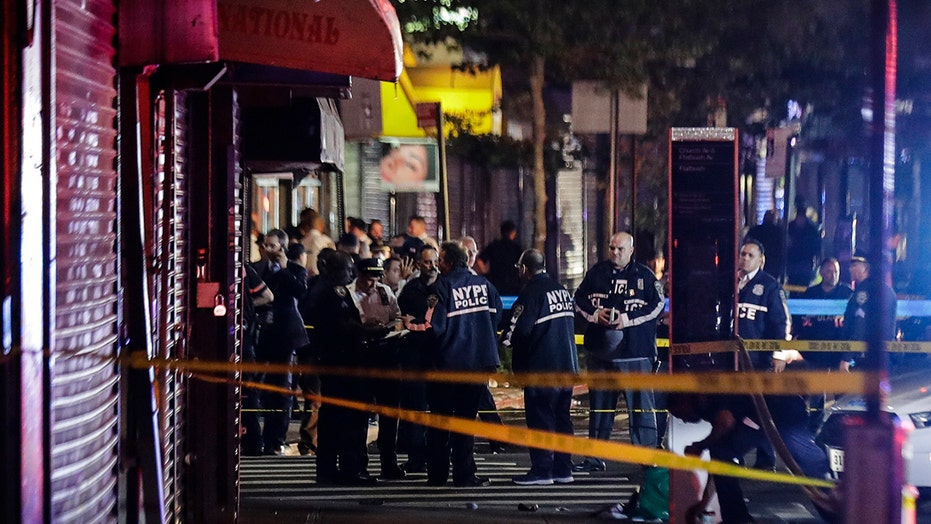 Laura Ingle reports from Brooklyn with an update after another violent night in the city.

The Justice Department revealed Wednesday it has filed dozens of charges for riot-related federal offenses in the aftermath of George Floyd's in-custody death -- including for aiming a green laser pointer at an FBI aircraft overhead in Milwaukee, torching the Third Precinct police station in Minneapolis, and impersonating a U.S. Marshal in Orlando.

The crackdown comes as President Trump has repeatedly demanded a return to "LAW & ORDER" in the country. Attorney General Bill Barr exclusively told Fox News this week that "focused" investigations of the left-wing Antifa are underway, as well as a review of the role of right-wing groups.

The DOJ specifically released a document, obtained by Fox News, that outlines in dramatic detail how some of the arrests were made amid the chaos.

For example, Branden Michael Wolfe, 23, was spotted on June 3 "wearing body armor and a law enforcement duty belt and carrying a baton" as he tried to enter a home improvement store in St. Paul, Minnesota. Wolfe had previously worked as a security guard at the store, but was "fired earlier that day after referring to social media posts about stealing items from the Third Precinct," the DOJ said.

Minneapolis Mayor Jacob Frey had ordered the Third Precinct evacuated, drawing a rebuke from the president; Frey was later booed away by protesters for not agreeing to defund the police entirely.

Upon his arrest, Wolfe was allegedly wearing multiple items stolen from the Third Precinct, including "body armor, a police-issue duty belt with handcuffs, an earphone piece, baton, and knife" -- and Wolfe's name was "handwritten in duct tape on the back of the body armor."

Authorities later recovered a "riot helmet, 9mm pistol magazine, police radio, and police issue overdose kit" from Wolfe. He allegedly confessed to throwing a barrel into the fire at the police station.

Meanwhile, in Orlando on May 31, 36-year-old John Wesley Mobley, Jr., was "forced to stop his vehicle because of passing protestors," the DOJ said. At that point, authorities said, Mobley exited the car and pulled out "what appeared to be a law enforcement badge, waved it at the protestors, and stated something to the effect of 'Do you want to get arrested? Do you want to go to jail?'"

In response, a protestor purportedly responded, “He’s a Marshal!”

Officers later heard Mobley was causing a disturbance with a gun in his waistband, and arrested him. He allegedly was holding a BB gun replica of a Glock pistol, not a real firearm, as well as metal handcuffs and a silver badge with the words "United States Marshal."

He has two prior convictions for impersonating law enforcement.

CALIFORNIA DEPUTY SHOT IN THE HEAD IN AMBUSH-STYLE ATTACK

In St. Louis, the feds used social media forensics to track down 19-year-old Devante Coffie, who allegedly broke into the Southside Pawn Shop and stole 32 handguns and two long guns. Coffie "cut himself on the broken glass of the window that had been used to enter the building," the DOJ said.

Investigators identified Coffie after "monitoring social media in an attempt to find information about the burglary," authorities said. "Not only was he trying to sell the firearms on social media, but also a video showed Coffie’s hands had multiple bandages on them.  At the time of his arrest, Coffie had in his possession one of the stolen firearms from the burglary."

CRITICIZING BLACK LIVES MATTER IS CAUSE FOR TERMINATION, ECONOMISTS ARGUE

In Champaign, Illinois on May 31, police officers "observed a Facebook post made by Shamar Betts at 10:31 a.m." that "included the statement, 'We gotta put Champaign/Urbana on the map – expletive – gone hear and fear us too. Slide let’s get busy Justice for George – expletive,'" the DOJ said in its document.

The post was allegedly accompanied by a flyer of a stock image of a burning vehicle overlaid with a date and time, "Riot @ MarketPlace Mall" 3:00 p.m., and listed items to bring, including "friends, family, posters, bricks, bookbags, etc," The DOJ said. The flyer also said “After the mall we hitting the whole PROSPECT & NEIL.”

Officers then observed a group of "approximately 50 to 75 people" who were reported to be gathering at the mall, the DOJ said. "The group continued to grow in size, and at approximately 3:12 p.m., the group began breaking out windows at businesses located in the mall and looting merchandise from within."

Prosecutors allege that during this time period, the 19-year-old Betts "posted a Facebook Live video in which he repeatedly states, "Look what a … just started…" and "We out here…"

Betts is accused of inciting a riot in which more than 50 businesses were vandalized, including Gordman’s, Kohls and TJ Maxx.

The Wisconsin laser pointer arrest came after cops noticed -- from May 31 through June 7 -- that there were "several incidents of individuals pointing green laser beams at law enforcement aircraft operated by the FBI and Wisconsin National Guard." The beams can create hazards for pilots.

Finally, on June 7, the DOJ said, law enforcement agents on the ground "observed two individuals near W. Chambers Street and N. 1st Street in the City of Milwaukee pointing a green laser beam at an FBI airplane.  One of the individuals pointing the laser beam matched the description of Jeremiah Belen."

Also on the list were two New York city lawyers charged in the firebombing of an NYPD police cruiser: human-rights lawyer Urooj Rahman and Pryor Cashman associate Colinford Mattis. They stand accused of causing damage by fire and explosives to a police vehicle and aiding and abetting that damage, respectively.

Fox News has reported that Salmah Rizvi, an associate at the law firm Ropes & Gray and a former Obama administration intelligence official, had bailed out one of the alleged bombers.

But both Mattis and Rahman were returned to custody by an appellate court soon afterward.

As the DOJ moved to prosecute alleged rioters, New York state officials announced Wednesday that Loretta Lynch, who served as attorney general in President Obama's administration from 2015 to 2017, will "help guide and support" authorities' ongoing investigation into the NYPD's interactions with the public in the wake of the Floyd protests.

The move came despite concerns over the numerous consent decrees that Lynch's Justice Department (DOJ) arranged with police departments, which observers said actually increased crime rates by disincentivizing policing and causing police to pull out of dangerous neighborhoods.

The consent decrees asserted that numerous police departments across the country were engaged in systemic racism. Critics, however, said the DOJ was improperly concluding that disparate enforcement numbers were necessarily evidence of police racism.

“There is no greater responsibility of government than the protection of its citizens,” Lynch said in a statement. “It is time to examine recent events to ensure that all New Yorkers receive truly equal protection under the law. I look forward to working with Attorney General [Letitia] James and her outstanding team on these important issues.”

Amid the protests during the past two weeks, some NYPD officers have been run over by cars, shot, and stabbed; others have drawn scrutiny for actions that were widely broadcast -- and, in some cases, heavily edited -- on social media.

New York City Mayor Bill de Blasio at one point called for an officer to be fired when a short video showed him brandishing a gun at protesters; a full video then emerged showing the officer's supervisor had just been hit by a brick.

A protester runs past burning cars and buildings on Chicago Avenue, Saturday, May 30, 2020, in St. Paul, Minn. Protests continued following the death of George Floyd, who died after being restrained by Minneapolis police officers on Memorial Day. (AP Photo/John Minchillo)

The mayor initially defended other officers filmed driving through protesters who were attacking their police vehicles before calling for an investigation. And an NYPD officer has been charged with assault for pushing a woman to the ground.

The episodes in New York and across the country came as President Trump has called for police reforms, while some Democrats and the Black Lives Matter group want the total defunding of police departments.