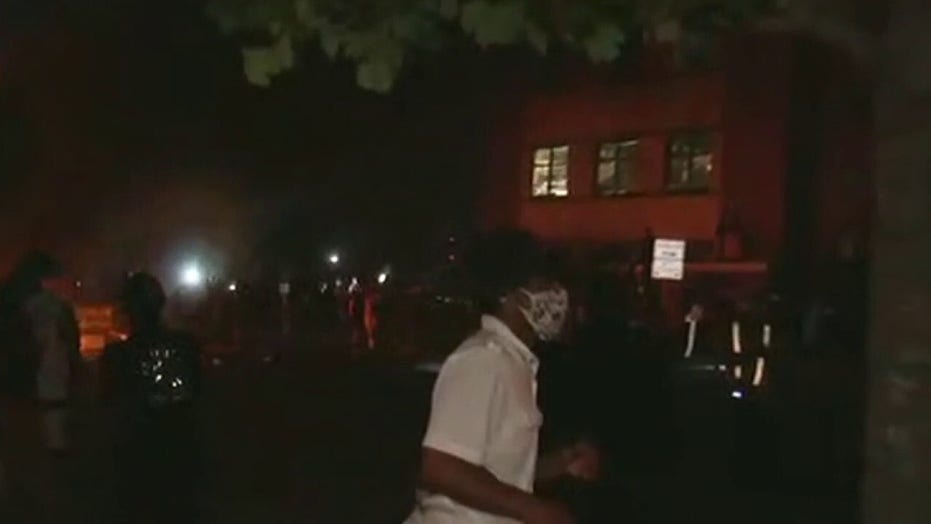 President Trump took to Twitter early Friday to vow military support for the governor of Minnesota after another night of violent protest in Minneapolis, which included a police station being overrun and set on fire.

Mayor Jacob Frey said it was his decision to evacuate the precinct.

“The symbolism of the building cannot outweigh the importance of life, our officers or the public,” he said. “We could not risk serious injury to anyone. And we will continue to patrol the Third Precinct,” he said.

Frey said Trump "knows nothing about the strength of Minneapolis. We are strong as hell. Is this a difficult time period? Yes. But you better be damn sure we are going to get through this."

Earlier in the day, Kayleigh McEnany, the White House press secretary, told reporters that the president was “very upset” when he watched the George Floyd video.

Floyd, a handcuffed black man, pleaded for air as a white police officer kneeled on his neck and died in police custody earlier this week.

It was “egregious, appalling and tragic,” McEnany said. “He wants justice to be served.” She said that the video prompted Trump to “pick up the phone” while aboard Air Force One and ask the FBI to expedite its investigation.

Protestors demonstrate outside of a burning Minneapolis 3rd Police Precinct, Thursday, May 28, 2020, in Minneapolis. Protests over the death of George Floyd, a black man who died in police custody Monday, broke out in Minneapolis for a third straight night. (AP Photo/John Minchillo)

Trump later told Buck Sexton, the radio host, that he watched the video “like everyone else did. That was a horrible thing that I watched. Horrible.”

A police spokesman confirmed late Thursday that staff had evacuated the 3rd Precinct station, the focus of many of the protests, "in the interest of the safety of our personnel" late Thursday. Livestream video showed the protesters entering the building, where fire alarms blared and sprinklers ran as blazes were set.

Protesters could be seen setting fire to a Minneapolis Police Department jacket and cheering.

More than 500 members of the National Guard were heading to the Twin Cities region, called in by Walz, the Star Tribune of Minneapolis reported.

Floyd's death has deeply shaken Minneapolis and sparked protests in cities across the U.S. Local leaders have repeatedly urged demonstrators to avoid violence.

Protestors watch as police in riot gear walk down a residential street, Thursday, May 28, 2020, in St. Paul, Minn. Protests over the death of George Floyd, a black man who died in police custody Monday, broke out in Minneapolis for a third straight night. (AP Photo/John Minchillo)

"Please stay home. Please do not come here to protest. Please keep the focus on George Floyd, on advancing our movement and on preventing this from ever happening again," tweeted St. Paul Mayor Melvin Carter, who is black.