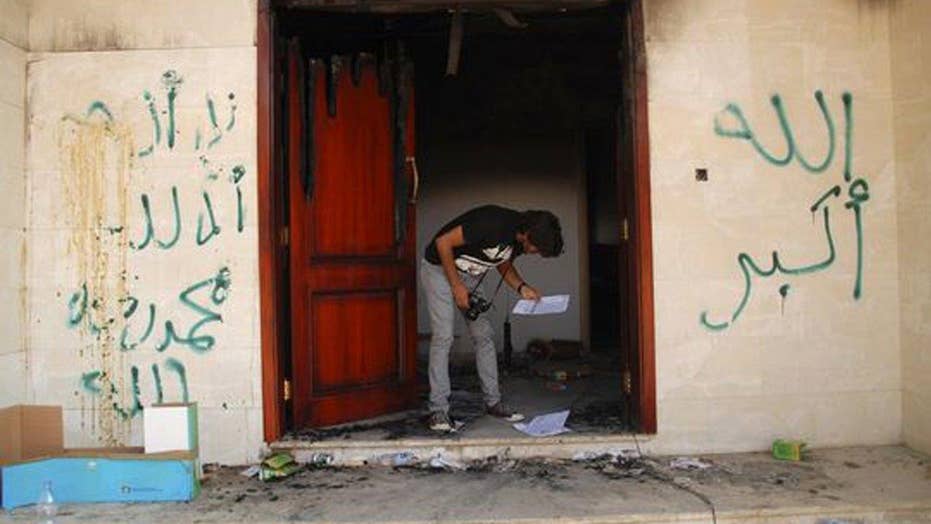 The State Department spent much of last year refusing to account for funds for the document review unit; James Rosen with an exclusive look for 'Special Report'

EXCLUSIVE: The State Department missed its own target date last year for the establishment of a special unit to review Benghazi documents, documents obtained by Fox News show.

The previously unpublished documents, generated by the House select committee that is investigating the 2012 terror attacks, detail how Rep. Trey Gowdy, the panel’s Republican chairman from South Carolina, began working behind the scenes early last year to help the department secure over $4 million in “reprogrammed” funds set aside by Congress for such a unit.

According to agreements worked out between Republican staff on the committee and top aides to Secretary of State John Kerry, including chief of staff Jonathan Finer, the document review unit was supposed to be “operational” in June 2015.

Yet the State Department, prompted by inquiries from Fox News, now acknowledges it missed that target date. “The Congressional Document Production unit began staffing up in mid-2015,” said State Department spokesman Mark Toner in an email late Thursday, “and is now fully operational.”

The records obtained by Fox News also show repeated refusals by Kerry’s aides, including Finer, to account for what happened to the appropriated funds when Gowdy’s staff made repeated inquiries about the matter back in mid-2015.

Toner also said the unit was intended to respond to various congressional panels, not just the Benghazi committee, and that despite indications in the correspondence between State and the Benghazi committee that the department promised to stand up the unit by last June, “no deadline was established” for the unit to be operational.

Gowdy told Fox News he sought the additional funding “so they could speed up document production to Congress and we could finish the investigation faster.”

In his email to Fox News, Toner acknowledged that Gowdy and his staff had indeed “supported” the request for additional funding.

This prompted Gowdy, in an emailed statement of his own, to say he “appreciates” the Obama administration “finally confirming the Benghazi Committee went the extra mile to complete its investigation as soon as possible by helping the State Department get extra funding.”

According to the internal committee files, the State Department’s document review unit was supposed to encompass twelve full-time employees, including at least three lawyers, “case managers” to oversee responses to specific document requests, and an IT professional.

The State Department conveyed to the committee last year that it intended to use some of the U.S. personnel evacuated from Yemen last year to staff the unit, according to the documents.

On Thursday, Toner said the use of the personnel from Yemen was “never necessary” – but did not spell out why the evacuated personnel were considered superfluous when the department was having trouble meeting its own target date of mid-June for the unit to become operational.

Asked at Wednesday’s press briefing if he could attest that the reprogrammed funds had actually been spent for the intended purpose, Toner said he was “fairly certain” that they “would have been.”

Co-chaired by Rep. Elijah Cummings, the Democrat from Maryland, the Benghazi committee has spent two years investigating the terrorist attacks on U.S. facilities on September 11, 2012 that killed America’s ambassador to Libya at the time, J. Christopher Stevens, and three other Americans.

The committee unearthed the fact that then-Secretary of State Hillary Clinton, now the frontrunner for the Democratic presidential nomination, used a private email server for all of her official email correspondence. Among the emails subsequently made public was one that showed Clinton giving her daughter an account of the attacks that differed sharply from the false narrative about them that the secretary of state, and other top administrations officials, were pressing publicly.

Toner noted that the department has already provided close to 100,000 pages of documents to the committee, which is expected to produce its final report next month.

Washington-based attorney Mark Paoletta, who spent a decade as the Republican chief counsel to a House investigating subcommittee, told Fox News the Obama administration is “notorious” for “slow-rolling” investigative panels like the Benghazi committee. He cited Clinton’s private email server as evidence of this pattern.

“How can you seriously say that you’re being transparent,” Paoletta said in an interview with Fox News, “when the secretary of state is running a private server and has deleted over 30,000 of those documents before anyone even knows that it’s in existence?”