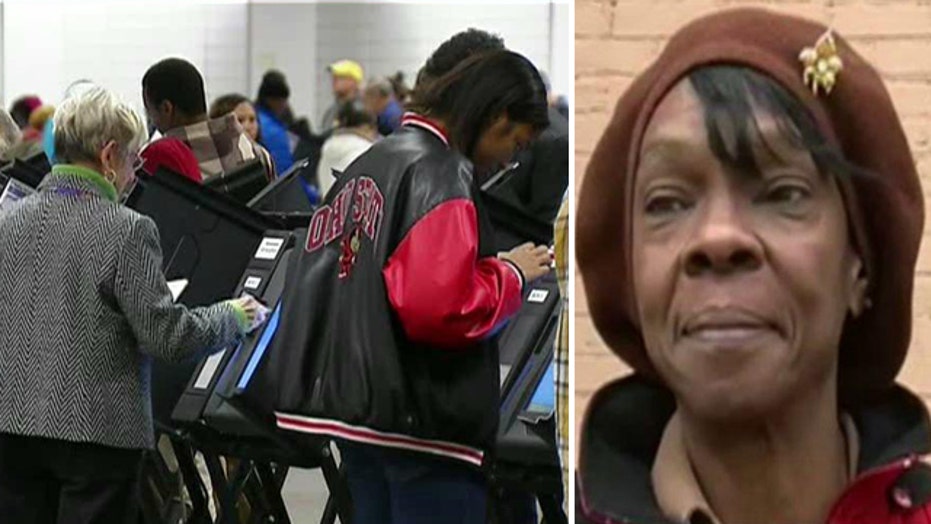 It seems that President Obama has an especially ardent supporter in the veteran Ohio poll worker.

Richardson told a local television station this month that she voted twice last November. She cast an absentee ballot and then voted at the polls as well.

"Yes, I voted twice," Richardson told WCPO-TV. "I, after registering thousands of people, certainly wanted my vote to count, so I voted. I voted at the polls."

Authorities also are investigating if she voted in the names of four other people, too, for a total of six votes in the 2012 presidential election.

"I'll fight it for Mr. Obama and for Mr. Obama's right to sit as president of the United States," Richardson vowed when asked about the voter fraud investigation that is now under way.

Richardson is one of 19 people suspected of illegal voting by the Hamilton County Board of Elections in the last election.

"I'm outraged, and every voter, regardless of their political affiliation, should be outraged," said Hamilton County Board of Elections member Alex Triantafilou, who is also chairman of the county Republican Party. "It causes folks to have real doubts about the fabric of our very democratic process, and it's dangerous. It is disconcerting that someone would be so bold as to admit their conduct in such a fashion ... We fully intend to prosecute these cases."

Richardson claimed she had submitted an absentee ballot, but was afraid her vote would not count so she also voted in person. She also said she voted in the name of her granddaughter and yet another person.

"There was absolutely no intent on my part to commit any voter fraud," she insisted.

But election authorities say voting more than once, or in someone else's name, is a big deal because it is illegal and threatens the credibility of the nation's election system.

"It appears she not only attempted to vote more than once, but was actually successful at it and having those additional votes counted," Ohio Secretary of State John Husted, who is in charge of the state's elections, told Fox News.

"She appears to have used her position as a poll worker to cover her tracks. That would be someone who is an official in the elections process, using that position to commit a fraud. That is especially troubling to me, as the chief elections officer of the state, because it is my responsibility to make sure the system runs effectively, that it has integrity. When I find issues like this, I know that it undermines voter confidence in our elections, and we must pursue it."

Three other absentee ballots in the names of different people were submitted to the Board of Elections from Richardson's address on Nov. 1. Officials say the handwriting on those ballots is similar and that they were all received together, on the same day that Richardson's absentee ballot arrived at the office. Richardson maintains that some of the other voters live at her house.

Attempts by Fox News to reach Richardson were unsuccessful, but she claimed to the local station that the votes were "absolutely legal votes."

In written reports detailing the 19 cases, Board of Elections investigators described their findings. In one instance, an investigator called a suspected double voter and was hung up on.

"I explained that she voted twice and she told me not to bother her and get off her phone and she hung up," the investigator wrote.

Another voter admitted to double voting, but did not think it was an issue.

"The voter said yes she 'voted early' and then voted again, then she asked 'what's the problem?'" according to the report.

Yet another voter was at a loss for explaining why he voted more than once.

"Voter said he remembered both times. He doesn't know why he voted twice," the report said.

The documents show that another voter said he had received a phone call before Election Day telling him his absentee ballot would not count. When investigators questioned him about voting two times, the voter replied "'as usual, you guys are wrong.' ... he was curious about the investigation and asked 'Now what will you do' and 'are you taping me now?"

The Hamilton County Board of Elections is holding hearings to further investigate these cases.

"It is so fundamental to people's faith in the democratic process, that we need to act very strong to make sure that we are doing everything we can to keep people's faith," declared Triantafilou. "There is always the concern, though, that there are those situations where we didn't catch folks."

As part of a new effort to root out any voter fraud, Secretary of State Husted has ordered all 88 of the state's county Board of Elections to hold public hearings on any credible voter fraud allegations or claims of voter disenfranchisement during the 2012 election. He said any substantiated allegations should be turned over to prosecutors.

"Once the election is over, and once the winner is declared, everybody forgets about it. I want to make sure that we don't forget about it, that we make sure we do, essentially, an audit of that process to ensure that we know what happened, and then use that evidence to guide us going forward. ... We need to learn from that last election so that we can be better before the next one gets here."

"Fraud does happen," noted Husted. "Most attempts are caught by the system. But there are cases that do slip through, as this one does, and we need to make sure that we really send a strong message, that if you do this, you are going to be held accountable. It might mean fines, it might mean jail time."

Voter fraud, said Husted, "undermines public confidence in democracy, and that's why we need, whether you are a Democrat or Republican, to root out all cases of voter fraud."

If you suspect voter fraud where you live, tell us: Voterfraud@Foxnews.com

Meredith Amor contributed to this report.