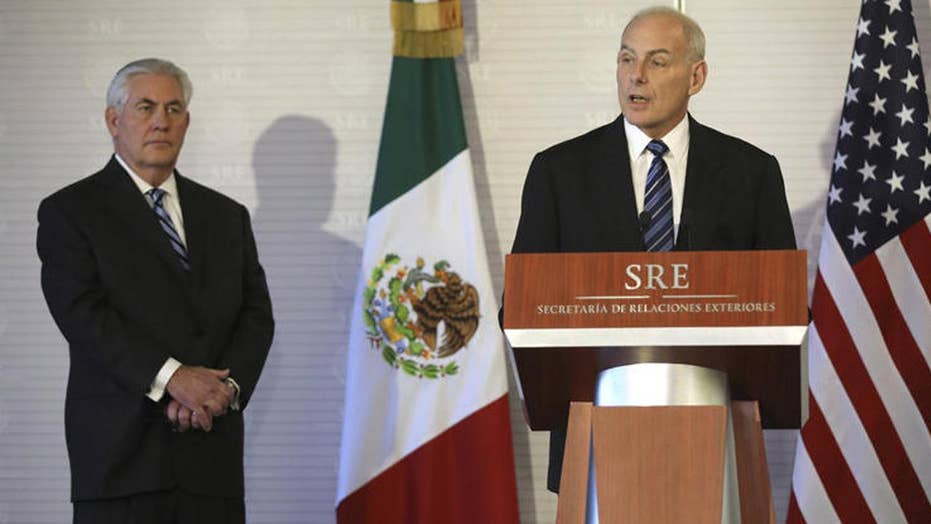 The DHS chief says the U.S. will enforce immigration laws without the military, while the secretary of state acknowledged problems with Mexico; Rich Edson provides insight on 'Special Report'

MEXICO CITY – Secretary of Homeland Security John Kelly vowed Thursday that the United States will enforce its immigration laws humanely, in coordination with Mexican officials and without using the U.S. military.

"There will be no use of military forces in immigration," said Kelly during a statement to the press at the Mexican Foreign Ministry. "At least half of you try to get this right."

Kelly was addressing reports that quoted President Trump describing recent deportations as "a military operation." The White House later claimed Trump was describing the efficiency of immigration enforcement operations, not the personnel involved.

Kelly and Secretary of State Rex Tillerson are in Mexico City to meet with their Mexican counterparts and President Enrique Pena Nieto after Mexican officials denounced several Trump administration policies.

While the White House touted the relationship Wednesday as "phenomenal," Tillerson acknowledged problems.

"In a relationship filled with vibrant colors, two strong, sovereign countries from time to time will have their differences," he said.

The Mexican government has been far more forthcoming in its objections. Foreign Secretary Luis Videgaray described recent U.S. policy proposals and rhetoric as an irritation prompting aggressive and negative feelings.

Mexico recently rejected the Trump administration's plan to allow the potential deportation of non-Mexicans to Mexico.

"We do not agree on the different measures that recently were stated by the government of the United States that affect Mexico," Mexican Interior Secretary Miguel Angel Osorio Chong said at the joint press statement.

"We have expressed our concern about the increase of deportations and possibly of the citizens of other countries being sent back to our territory, so that they can wait for the legal resolution."

According to the administration, both countries have agreed to avoid discussing Trump's plan to build a border wall at Mexico's expense.

The Trump administration also wants to alter the $1.5 billion trade relationship between the US and Mexico and renegotiate the North American Free Trade Agreement, or NAFTA. Mexican Economy Minister Ildefonso Guajardo has said that if those talks fail, the Mexican government would consider tariffs on U.S. goods sold in Mexico.