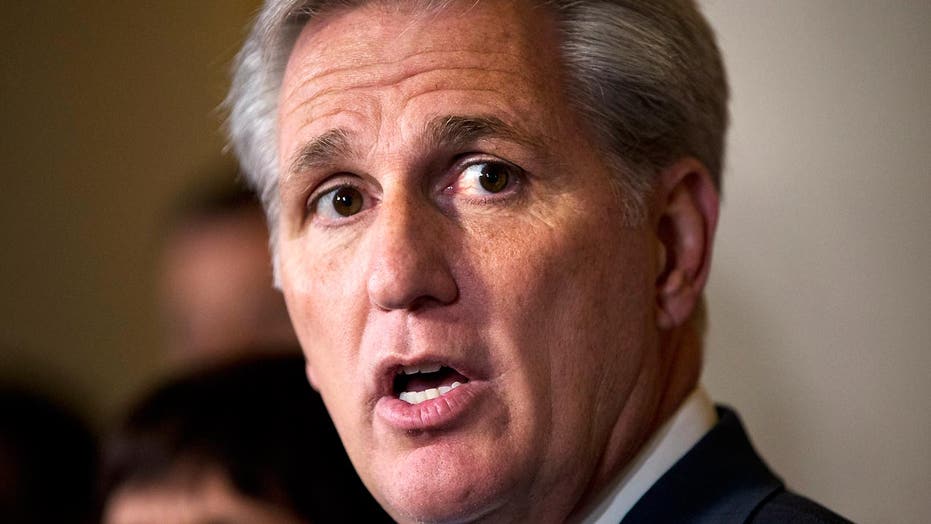 The Department of Homeland Security has launched an investigation into reports that someone with a DHS IP address edited Wikipedia pages to include references to an alleged affair involving House Majority Leader Kevin McCarthy, who bowed out of the race for speaker Thursday.

The California Republican stunned the conference with his decision, saying the House needs a "fresh face" to lead and suggesting he could not unite conservatives.

But reports of infidelity on conservative websites hung over the decision, and were cited in apparent revisions to Wikipedia pages.

Washington Free Beacon reporter Lachlan Markay first noted on Twitter that "someone using a DHS IP address" made the edits to Rep. Renee Ellmers' Wikipedia page. The Daily Caller noted a similar edit was made to McCarthy's page, referencing a report by controversial conservative writer Charles Johnson on an alleged affair between the two.

"DHS has immediately launched an investigation into this serious matter. If it is discovered that a DHS employee, using Government property, is responsible for these alleged actions, immediate and appropriate disciplinary action will be taken," she said in a statement.

Ellmers, in a meeting Friday morning, reportedly thanked fellow Republicans for their support, referencing the rumors. In a statement, Ellmers said: "As someone who has been targeted by completely false accusations and innuendo, I have been moved by the outpouring of support and prayers from my colleagues, constituents and friends. Now I will be praying for those who find it acceptable to bear false witness."

McCarthy also appeared to downplay the reports Thursday, shortly after telling colleagues he was withdrawing from the speaker race.

"No, No. Come on," McCarthy said, when asked about the rumors and a mysterious letter from another colleague.

That letter, sent earlier this week by Rep. Walter Jones, R-N.C., to House Republican Conference Chairwoman Cathy McMorris Rodgers, R-Wash., urged a full vetting of all leadership candidates to avoid a repeat of 1998, when the conference selected then-Rep. Bob Livingston in November to succeed outgoing House Speaker Newt Gingrich. It then emerged Livingston had been conducting an affair. Jones asked that any candidate who has committed "misdeeds" withdraw.

Pressed repeatedly in interviews by FoxNews.com and Fox News, Jones would not elaborate in any significant detail.

He told FoxNews.com he doesn't think his letter prompted McCarthy to bow out, but also said of his decision: "There's something there that I don't know about."

He hinted, though, his letter was not aimed at the other two candidates running for speaker at the time, Reps. Jason Chaffetz, R-Utah, and Daniel Webster, R-Fla. Asked if he had reservations about them, given that his letter called for a leader of "integrity," he told FoxNews.com: "I think they both are men of high integrity. I would have no problem."

The Huffington Post also reported Thursday that McCarthy was sent an email from a conservative activist threatening to reveal an alleged affair.

The subject line reportedly said: "Kevin, why not resign like Bob Livingston?"

FoxNews.com's Judson Berger and Cody Derespina and Fox News' Doug McKelway and the Associated Press contributed to this report.