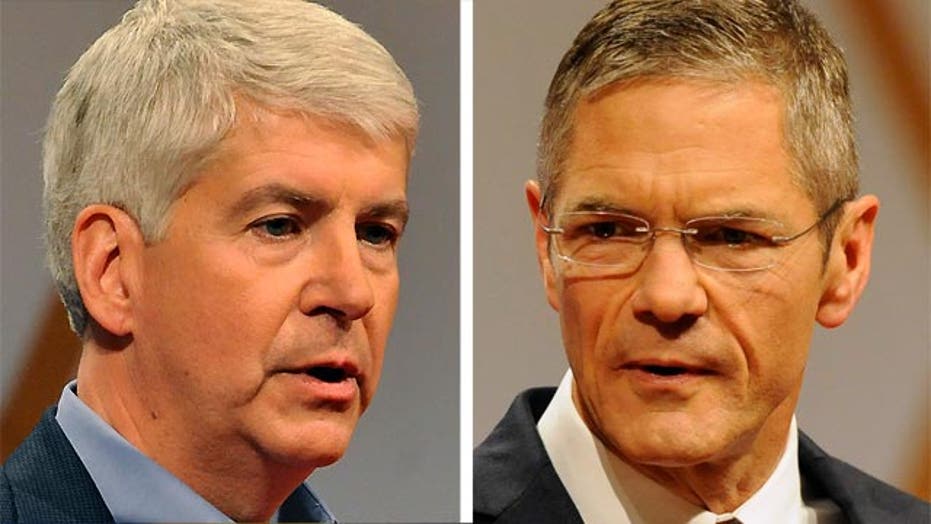 The historic Detroit bankruptcy is playing a lead role in the Michigan gubernatorial race, as Republican Gov. Rick Snyder defends the decision to hand the city and its backbreaking financial problems over to an emergency manager who opened the door to controversial cuts.

At a recent debate at Wayne State University in Detroit, Democratic challenger Mark Schauer pounced on the decision to bring in emergency manager Kevin Orr and ultimately cut what had been considered sacred: pension obligations to city employees.

"I would have personally led rather than having an unelected, unaccountable person do it, and I never would have thrown Detroit, pensioners, police officers and firefighters under the bus," Schauer said.

But just a few weeks out from Election Day, Snyder is not backing down from his decisions aimed at saving the Motor City. He notes the city was $18 billion in the hole and claims his plans are working.

"That was one of the toughest decisions to be made in the United States," Snyder said Sunday. "It was the right decision to make. Look at where we are today. We're within a month to two months of coming out of bankruptcy."

Detroit's financial distress represents just one of several major issues coming to the fore in the Michigan race, but is perhaps the most contentious.

The race itself has brought power players from across the country swooping in -- as both parties want control of the governor's mansion in a key Midwestern state before the White House goes up for grabs.

"Michigan, while it leans Democratic, is still a state that's competitive in the presidential level, and I think both campaigns or both parties want to hold onto as many elected spots as they can," said Tom Bevan, of Real Clear Politics.

First lady Michelle Obama showed up at the Detroit Music Hall on Friday to stump for both Senate candidate Gary Peters and Schauer, a former U.S. congressman for Michigan.

Poll numbers give an edge to the incumbent, but only a slight edge. A Real Clear Politics average of polling shows Snyder ahead 44.7-41.5 percent -- a statistical tossup.

On Sunday, Schauer took jabs at Snyder's record, accusing him of cutting school funding. Snyder countered that spending on schools actually increased by a $1.1 billion on his watch.

Schauer claims the governor imposed a new tax on retirees.

"I will repeal the job-killing pension tax. It is wrong. It is bad tax policy," he told the crowd at Wayne State University.

Snyder counters that he eliminated a loophole, which allowed 50-year-olds to retire early and dodge their tax obligation. "We created a fairer system," he said.