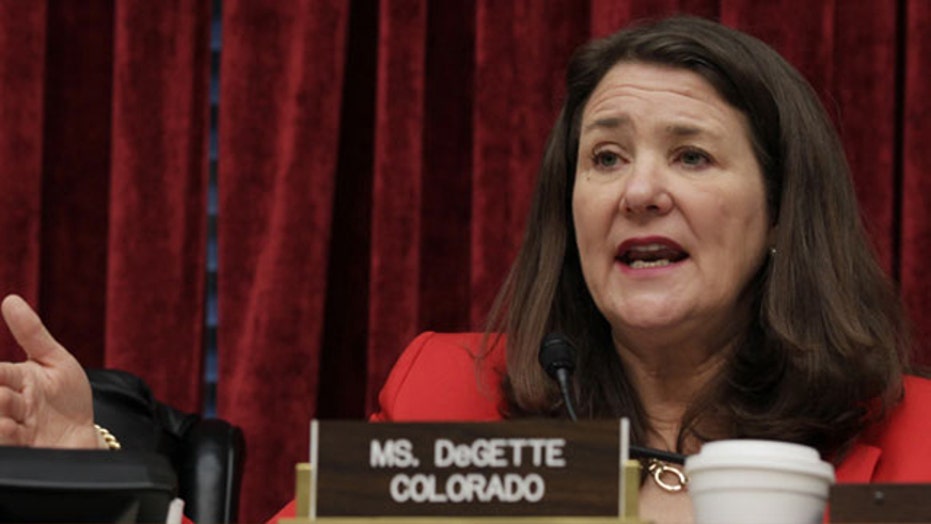 “You’d probably be dead anyway if they had that kind of firepower.”

-- Rep Diana DeGette at a gun control forum hosted by the Denver Post in answer to a Denver resident’s concern that her proposal to outlaw large-capacity magazines would leave him at a disadvantage if faced with well-armed intruders.

The lead sponsor of a bill to ban high-capacity magazines for firearms dismissed concerns that the tens of millions of such devices already in use would render her ban pointless by explaining that that the existing ones would be used up in time.

"These are ammunition, they're bullets, so the people who have those now, they're going to shoot them, so if you ban them in the future, the number of these high-capacity magazines is going to decrease dramatically over time because the bullets will have been shot and there won't be any more available,” said Rep. Diana DeGette, D-Colo., at a forum hosted by the Denver Post.

DeGette’s office tried to clarify the blunder, with a spokeswoman saying that DeGette meant to say “clips,” not magazines. But clips, devices for quickly loading ammunition into a weapon, are mostly re-usable too.

Like the colossal gaffe by former Missouri Rep. Todd Akin in last year’s Show Me State Senate debacle, this is evidently something that DeGette actually believes or believed until she became the object on nationwide mockery. And like Akin did on rape and abortion, DeGette was advocating hard-line legislation on the subject while apparently holding the erroneous view.

DeGette’s assertion came ridiculing a questioner in the audience who was concerned that he would be outgunned by intruders if her ban was in place, telling the senior citizen that he would probably be dead anyway if facing such an assault so he shouldn’t worry about her proposal.

Following that up with such a broadly incorrect statement offered in a voice of absolute certitude was especially unhelpful.

While this is personally embarrassing for DeGette, who has held herself out for years as an expert on the subject of firearms, it is also a blow to the broader Democratic effort to impose gun control measures. Like Akin’s revelation, DeGette’s has national implications.

The argument from Democrats is that they understand the subject and are sympathetic to legitimate gun owners, but wish to apply “common-sense” restrictions to prevent mass shootings in the future. When the principle architect of the ban on large-capacity magazines and clips does not understand the mechanics behind a central criticism of her plan – that the huge number of such devices already in existence negates much of the purported benefit – it becomes harder for Democrats to claim they are operating from “common sense.”

Just as pro-choice women fumed when they heard a man with a fundamental misunderstanding of human reproduction talk about banning abortion, pro-gun Americans are fuming over hearing DeGette’s assertions. And like pro-life lawmakers who agreed with Akin on the ban but knew about the birds and bees and rushed to say that his ignorance did not invalidate their argument, anti-gun Democrats will have a hard time getting away from DeGette’s comments.

DeGette was at the forum in concert with President Obama’s visit to Denver to sell a suite of gun control measures, including the one backed by the congresswoman. The president sought to allay fears of gun owners, saying, "There doesn't have to be a conflict between protecting our citizens and protecting our Second Amendment rights."

The congresswoman, who has represented a liberal district for 16 years, is not likely to suffer at the ballot box for her misapprehension. But the president and his ally, New York Mayor Michael Bloomberg, may find it harder to convince Democratic lawmakers from moderate states and districts to rally to the cause as a result.

DeGette revealed the divide between the two Americas on firearms and may have finally sunk Democratic hopes for substantive restrictions on weapons in the process.

“That’s why for an hour I am putting aside my cynicism and crediting [President Obama on gun control] either with sincerity or, if you like, the grandiosity of a second term president who thinks he is omnipotent.”