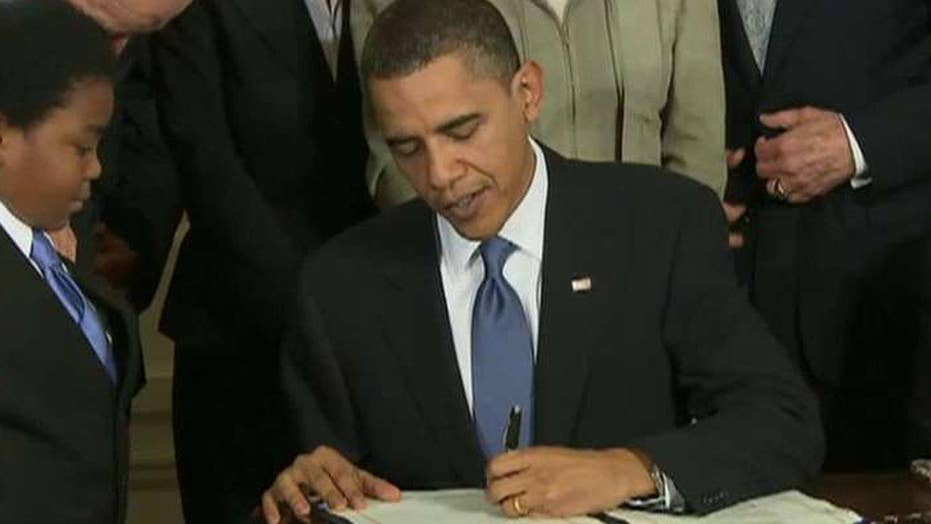 Next president may face ObamaCare meltdown

Trump or Clinton administration will take office just as the latest ObamaCare enrollment tally comes in - after a year of big insurers complaining about losing money. 'The Hill's' Sarah Ferris goes 'On the Record'

President Obama and his Democratic allies are seizing on the exodus of private insurers from ObamaCare markets to renew their push for a so-called "public option" -- but Republicans say more "government intervention" is not the answer to the latest Affordable Care Act woes.

A public option -- or insurance plan offered by the government -- had been written into early versions of the bill but failed to make the final cut in the law signed by Obama in March 2010.

But with many states seeing private insurers exit ObamaCare markets amid concerns over cost and other factors, Democrats see a silver lining to what critics are calling another ObamaCare crisis -- a reason to bring the option back.

“Now, based on experience with the ACA, I think Congress should revisit a public plan to compete alongside private insurers in areas of the country where competition is limited,” Obama wrote last month in the Journal of the American Medical Association.

The president called on his White House successor and Congress to implement the option. A former Obama health official, Ezekiel Emanuel, also backed up the president in a recent op-ed. And ex-Obama campaign manager David Plouffe added his support in an interview with NBC's "Meet the Press."

Her Republican rival Donald Trump and several GOP lawmakers, though, say the public option isn’t an option at all.

Sen. John McCain, R-Ariz., who is seeking a 6th term, has been a vocal opponent of ObamaCare from the start and maintains “the whole thing is collapsing like a house of cards.”

“Now that the law is unraveling, it’s no surprise that Democrats are clamoring for a so-called ‘public option,’” McCain told FoxNews.com in a statement. “If anything is clear about this failed law, it’s that more government intervention is the wrong solution to fixing our health care system.”

Arizona is bracing for double-digit premium hikes next year.  Residents in Pinal County, in the central part of the state, are set to have no insurer options on the ObamaCare marketplace.

It’s a trend that’s expected to spread as major insurers like UnitedHealth, Blue Cross Blue Shield and Humana report millions in losses tied to the ACA. In order to stop the fiscal bleeding, insurers have been increasing premiums, scaling back expansion efforts or in some cases exiting the marketplace entirely.

Before Aetna announced it would leave Arizona and other states, the company proposed an 18 percent premium rate hike to cover its losses.

McCain, like other Republicans, believes the situation is so dire that the only way to fix it is to scrap the law completely and start over.

Senate Majority Leader Mitch McConnell recently told a group of Kentucky business leaders that the health care law is “crashing” under the weight of rising premiums.

The Republican lawmaker said he had no doubt ObamaCare would be “revisited” by the next president but that the extent of changes depends on who’s elected to the White House and which party controls Congress.

Twenty-four Republican senators are up for reelection this year compared with only 10 Democrats. To take control in the Senate, Democrats need to pick up as many as five seats. If Clinton wins, Democrats would only need four seats since the vice president casts tie breakers.

It’s a different story in the House. To take back the lower chamber, Democrats need to pick up 30 seats – some in deep red states. The best Democrats may be able to hope for is a divided Congress – combative, partisan and gridlocked on major issues like health care reform.

Whether the public option would ease or exacerbate the problem -- by driving more insurers out of the market -- is a matter of debate.

Emanuel, chairman of the Department of Medical Ethics and Health Policy at the University of Pennsylvania who served in the Obama administration from 2009-2011, says the goal is to keep the exchanges stable.

“We should consider a public option triggered when consumers do not have adequate choice,” he wrote in an opinion piece for The Washington Post. “Consumers should never be subject to the whims of insurer withdrawals or withdrawal threats.”