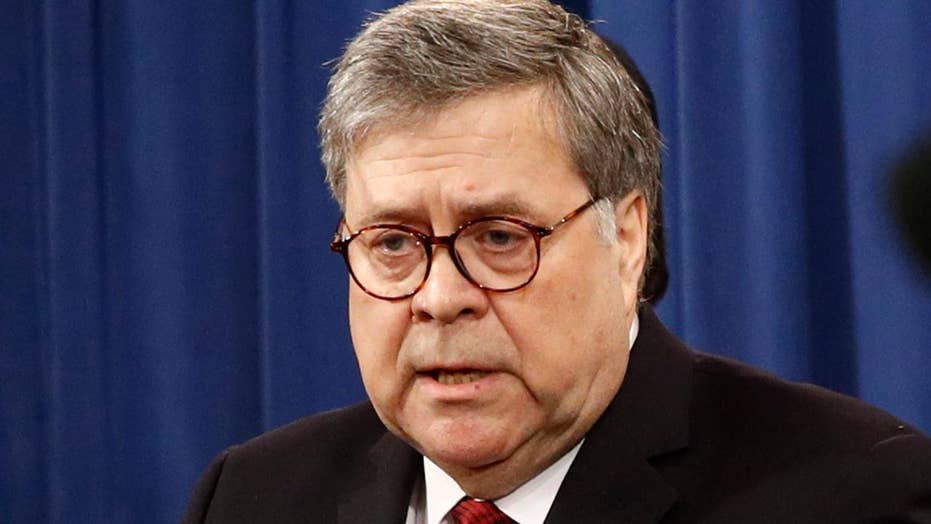 A dozen Democratic senators on Tuesday called for the Justice Department’s inspector general and the Office of Professional Responsibility to launch an investigation into Attorney General William Barr’s handling of Special Counsel Robert Mueller’s report.

Sen. Mazie Hirono, D-Hawaii, led 11 other senators who penned a letter to DOJ’s Inspector General Michael Horowitz and director of Professional Responsibility Corey Amundson, urging them to probe Barr’s conduct while handling Mueller’s investigation and report. The move comes just one day before Barr is expected to testify before the Senate Judiciary Committee.

“Attorney General Barr’s actions raise significant questions about his decision not to recuse himself from overseeing the Special Counsel’s investigation, whether his actions with respect to the release of the report, compiled with Department of Justice policies and practices, and whether he has demonstrated sufficient impartiality to continue overseeing the fourteen criminal matters related to the Special Counsel’s investigation that were referred principally to other components of the Department of Justice and the Federal Bureau of Investigation,” the senators wrote.

“In light of these concerns, we respectfully request that the Office of the Inspector General and the Office of Professional Responsibility immediately begin investigations of these issues.”

Of the senators who signed onto the letter, only six of the ten Democratic members of the Senate Judiciary Committee signed. Ranking Member Dianne Feinstein, D-Calif.; Patrick Leahy, D-Vt.; Dick Durbin, D-Ill.; and Chris Coons, D-Del., did not sign the letter.

The request for an investigation comes amid the mounting scrutiny Barr has faced over his handling of Mueller’s report. When the special counsel transmitted the more than 400-page report to the Justice Department last month, Barr released a four-page summary revealing the results of the nearly two-year-long investigation.

Barr announced that the special counsel found no evidence of collusion between members of the Trump campaign and Russia during the 2016 presidential election. Mueller was also leading an inquiry into whether the president obstructed justice during the investigation. Mueller did not come to a conclusion on that matter, but rather kicked the decision back to the Justice Department. Barr and Deputy Attorney General Rod Rosenstein announced that the evidence found in Mueller’s investigation was not sufficient to charge the president with an obstruction of justice offense.

BARR SPARS WITH NADLER, THREATENS TO SKIP TESTIMONY AFTER DISPUTE OVER HEARING FORMAT

Following the release of the summary, Barr vowed to release the full report, with redactions, to the public and Congress by mid-April. Barr stuck to his word but faced backlash from congressional Democrats over his decision to redact certain areas of the report. The redactions covered certain areas reviewed both by Barr and Mueller to protect sources and methods, as well as reputational interests of “peripheral players” in the investigation.

Prior to the release of the full report, Barr testified before Congress and faced harsh criticism over his comments about the origins of the Trump-Russia investigation. Barr said he was conducting a review of the origins and alleged misconduct at the beginning of the counterintelligence investigation. Barr also said that he believed “spying did occur” on the Trump campaign in 2016—a comment for which congressional Democrats blasted him.

Meanwhile, the Justice Department and the House Judiciary Committee are in a stalemate over the attorney general’s testimony, slated for Thursday. Democrats on the panel want to have committee staff question Barr. The Justice Department and the attorney general have said he will not attend his scheduled hearing unless he was questioned by members of the committee.