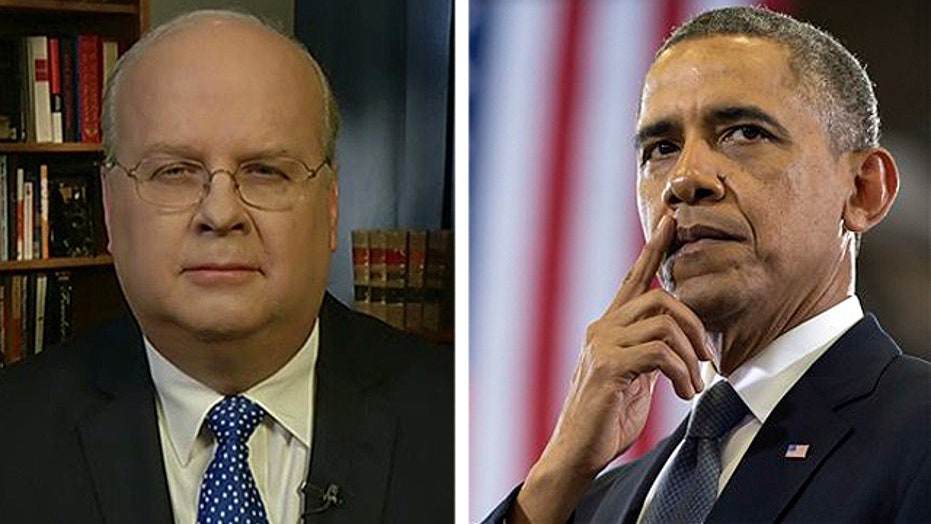 Are Dems running away from Obama?

Has President Obama already become Kryptonite for Democrats in the 2014 midterms?

House and Senate Democrats are breaking with President Obama on issues like energy, trade and health care, forcing the White House to try to tamp down internal Democratic divisions in a bid to preserve party unity in a crucial election year.

The president is facing increasing pressure from Democrats in Congress to approve the Keystone XL Pipeline, following the release of a report that raised no major environmental concerns. Vulnerable Democrats have also taken steps to distance themselves from the rocky rollout of ObamaCare.

Obama met Monday with Senate Majority Leader Harry Reid, who opposes the president's proposal for letting Congress vote quickly to approve international trade pacts. A Democratic official told The Wall Street Journal the meeting was requested by Reid and was unrelated to the trade policy rift.

Reid was joined at Monday's White House meeting by Colorado Sen. Michael Bennet, the chairman of the Democratic Senatorial Campaign Committee, and Guy Cecil, the committee's executive director. The president is expected to hold separate meetings this week with House and Senate Democrats.

"There is far more that Democrats in Congress and the president agree on than there are areas where there might be differences," Obama pollster Joel Benenson told The Wall Street Journal.

The president's meetings this week with House and Senate Democrats will focus in part on mapping out a legislative strategy for raising the federal minimum wage from $7.25 per hour to $10.10 — a proposal the party sees as both a political and policy winner.

While Democrats are largely united on economic matters, other politically volatile issues keep bubbling to the surface, exposing long-standing divisions that inevitably take on greater importance in an election year.

After Obama used his State of the Union to press lawmakers for a speedy vote on two major trade agreements, Reid told reporters he opposed the administration's proposal, which is critical to advancing two major international trade deals with Europe and Asia, according to The Wall Street Journal.

"I think everyone would be well-advised just not to push this right now," Mr. Reid said. Sen. Jeanne Shaheen, D-N.H., another Democrat facing the prospect of a tight race this fall, told the newspaper the issue has "pressures" on both sides. "We're taking a look at it," she said.

On Friday, Democratic senators like Mary Landrieu of Louisiana and Kay Hagan of North Carolina — both facing tough re-election fights — ratcheted up pressure on the president to approve the Keystone XL pipeline after a State Department review raised no significant environmental objections to the project.

Some Democratic lawmakers have also split with the White House in recent months on Iran sanctions and National Security Agency spying. And the failed launch of Obama's signature health care law spurred deep anxiety among Democrats facing re-election next year, causing some to break with the White House on elements of the legislation, though they still continued to stand by the overall measure.

The divisions have become frequent fodder for Republicans, who have sought to expose any cracks in the relationship between the president and his party. That's particularly true on the Keystone XL pipeline, which Republicans support, and on trade, where the GOP finds itself in rare alignment with the president.

Senate Minority Leader Mitch McConnell, R-Ky., took on both issues Monday, saying "The president's own party is now standing in the way of getting anything done."

A White House official told The Wall Street Journal a decision on Keystone seems likely before the November midterm elections. The official also said the administration is aware of election-year tensions causing some Democrats to part ways with the president on policy issues.

"Overall, on our economic-opportunity agenda, that's something Democrats are excited about," the official said.