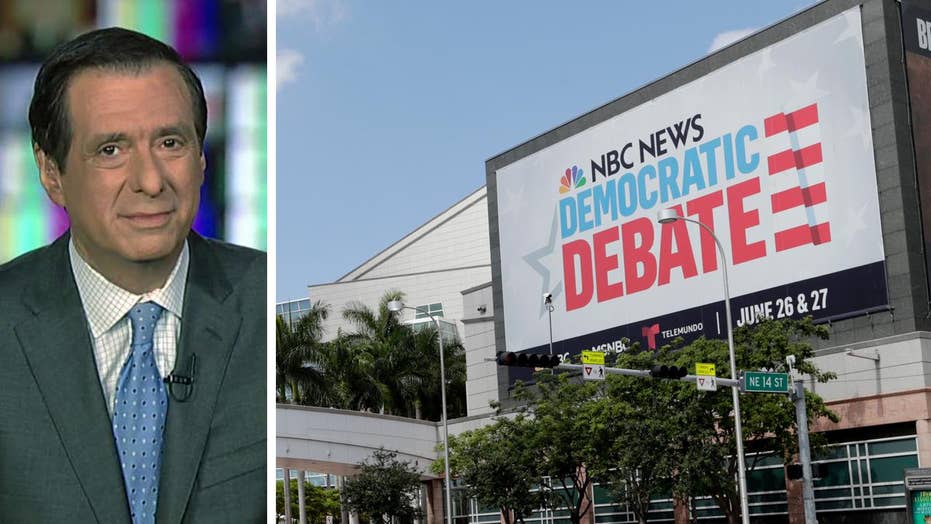 Howard Kurtz: Instant replay -- How the media will pick the debate winners

'MediaBuzz' host Howard Kurtz weighs in on the likelihood that the first round of presidential debates between the Democrat candidates could end up being a dull. Due to the time constraints imposed by having 10 contenders on a stage, there won’t be much real debate, as many of them will still be introducing themselves to a public that knows little or nothing about them.

Some Democrats and liberal activists are worried that the first round of presidential debates, which kicks off tonight, could turn into a circular firing squad.

The worry is that with crowded stages and so many candidates desperate for a breakthrough moment, the events will devolve into a series of personal attacks designed to go viral.

I think it's equally likely that the debates become a snoozefest. The time constraints imposed by having 10 contenders on a stage won't allow for much real debate, and many of them will still be introducing themselves to a public that knows little or nothing about them.

And with MSNBC moderators, including Rachel Maddow, asking the questions, the focus is likely to be on policy and not an effort to get the Democrats to pummel each other.

One easy prediction: The media will play an outsize role in declaring the winners and losers.

That’s less true in a one-on-one debate, but with 20 candidates fielding questions over four hours, the action will seem like a blur, and many Americans will either have missed the sessions or caught only part of them.

Beyond the prognostications, the clips that television chooses to endlessly replay (and which get traction online) will shape perceptions of the outcome long after the politicians get off the Miami stage.

And even early debates matter. Four years ago, Tim Pawlenty had charged Mitt Romney with being the original author of the health care plan he derisively termed "Obamneycare." But during a debate, the Minnesota governor whiffed, fumbling questions about it with a mealy-mouthed explanation that he was just quoting Obama. The press concluded Pawlenty couldn't deliver a punch, and he soon dropped out of the race.

The media verdict this week will be heavily influenced by the pundits' own predilections. And if you want to know how the press is treating the top Democratic contenders heading into the televised showdowns, check out the latest coverage.

Joe Biden continues to face a sizable gap between the media's low opinion of his candidacy and the way he's being received in his (limited) appearances on the trail.

Politico acknowledges this, mainly by leaning on a poll that shows him with 38 percent support:

"Joe Biden's all-too-friendly touching of women in the MeToo era was supposed to be toxic to his presidential campaign. Critics thought his flip flop on subsidized abortions would show how deeply out of touch he was with the modern Democratic Party.

"The latest controversy buffeting his campaign — his statements about his working relationships with Dixiecrat segregationists when they served in the U.S. Senate together more than 40 years ago — has chewed through news cycles for the past week.

"Yet none of it seems to have damaged his standing in the race."

The reason: in a Politico/Morning Consult survey, after hearing what Biden said about having worked with segregationist senators, "41 percent of likely primary voters said it would make no difference to them and 29 percent said they would be more likely to vote for him. Just 18 percent said they would be less likely to vote for him." The split was similar among black voters.

I love the passive voice of this paragraph:

"Much of the conventional wisdom has so far been wrong about Biden — that his best day in polls would be his first as a candidate, that he wouldn't be able to raise enough money to compete, that he was too moderate, too old or too white for the modern Democratic Party."

Yet Biden still holds a 2-to-1 lead over his closest rival, as he did two months ago.

Liberal Times columnist Michelle Goldberg, who opposes Biden's nomination for ideological reasons, says voters on the trail don't ask about the segregationist flap and other media-centric controversies. But she essentially says he's lost his fastball:

"Seeing Biden on the stump often feels like watching an actor who can't quite remember his lines. Even if you don't support him, it's hard not to feel anxious on his behalf ... His performance was unnerving."

Now contrast that with the warm embrace of Elizabeth Warren, who has already been the subject of a glowing profile in The New York Times Magazine (and the New Yorker), and now gets another Times piece about growing up in Oklahoma and being in the debate club:

"She was competitive and had extraordinary focus and self-discipline, spending hours after school each day practicing ... It has been over 50 years since that time and Liz Herring has become Elizabeth Warren, one of the 24 women and men vying for the Democratic Party's nomination for the presidency.

"Her ferocious command of details on a debate stage once earned her a college scholarship. Now she is deploying that skill in town halls across the country and on Wednesday in the Democratic National Committee's first debate for the 2020 election."

As for Bernie, he's depicted as being in trouble, as in this Washington Post strategy piece:

"The Bernie Sanders campaign, facing a new challenge in the rise of Elizabeth Warren, has settled for now on a careful if sometimes awkward strategy."

The debates may shift the media handicapping, but unless there are fireworks, probably not all that much.