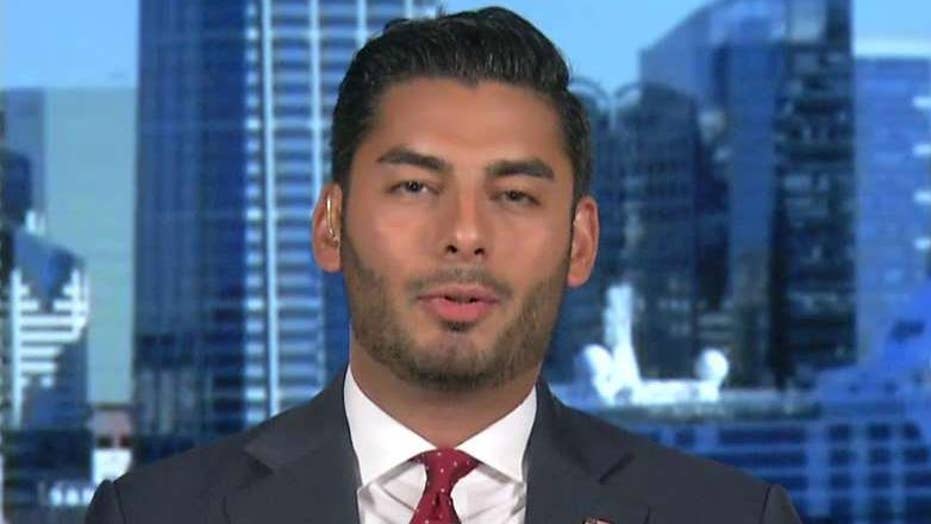 But after Hunter’s indictment Tuesday on corruption charges, including allegations of lavish personal spending with campaign funds, Campa-Najjar is suddenly a contender.

With his boosted chances, though, has come scrutiny of his dark family past -- his grandfather was a member of the Palestinian Black September terror group that killed 11 Israeli athletes at the 1972 Olympic Games in Munich.

The 29-year-old political neophyte, who has both Mexican and Palestinian heritage, has been quick and unequivocal in separating himself from Muhammad Yusuf al-Najjar.

Campa-Najjar is keen to point out he has never met his grandfather, whose death at the hands of Israeli commandos happened 16 years before Ammar was born. In a statement this week, the former Obama administration Labor Department official used his disavowal of his grandfather to take a not-so-subtle dig at his opponent.

"I'm happy to take responsibility for my own choices and my own decisions," he said. "I think other men are responsible for their own crimes, whether it's somebody who I share a lineage with and nothing else, or a sitting congressman whose being indicted and could be facing serious charges in the future."

His campaign also says while he’s proud of his heritage, he is “American first.”

In an interview, Campa-Najjar told Fox News he isn’t concerned that his family history could harm the campaign.

“I’m not concerned, but I think it shows Hunter is concerned,” he said. “My opponents have to go back three generations to attack me. I can go back three days to highlight something pretty damning about him.”

Israeli media first drew attention to his family ties in early 2018, with reports noting he advocates a peaceful solution to the Middle East conflict -- unlike his grandfather.

Hunter and his wife, meanwhile, pleaded not guilty to the charges against them on Thursday, and Hunter has declared the prosecution to be politically motivated. But with a lengthy list of personal spending totaling up to $250,000, Hunter has struggled to explain the charges.

On Thursday, he was asked about spending by his wife, Margaret, and appeared to distance himself from her actions, saying it was her that handled the campaign finances.

"She was also the campaign manager, so whatever she did that'll be looked at too, I'm sure," Hunter told Fox News’ Martha MacCallum. "But I didn't do it. ... I didn't spend any money illegally."

But even with Hunter's legal problems, Campa-Najjar faces a tough climb to victory. He picked up only 17.5 percent in the district’s jungle primary and will need to convince a lot of Hunter voters to switch.

His website advocates for an eventual shift to 'Medicare for all,' a popular rallying cry on the left that may be a tough sell in this district. This week, liberal darling Alexandria Ocasio-Cortez called Campa-Najjar her "progressive brother."

However, the candidate is not embracing hard-left rhetoric publicly and even criticized his party for ignoring Trump voters on Friday.

“Those Trump supporters who voted for him voted not because they're ignorant but because they've been ignored, by my party and by the country,” he said.

On immigration, while he does not back Trump’s border wall and believes in a pathway to citizenship for illegal immigrants brought to the U.S. as children, he supports tougher fines for employers who break immigration laws and does not support growing calls in his party to abolish Immigration and Customs Enforcement (ICE).

He brushed off the question of whether he was a moderate or a left-wing progressive in the model of Ocasio-Cortez.

“I don’t really care for labels, I've been labeled under the sun, and I’m not one who really fits into anyone’s label. I am who I am, I’m comfortable in my skin and my views come via my life experiences,” he said.

Campa-Najjar, who is Christian, is the son of a Palestinian Muslim father (he spent part of his childhood in Gaza) and a Catholic Mexican-American mother.

As for Hunter, he is careful not to go overboard in his criticism of his embattled opponent. Campa-Najjar repeatedly called Hunter a “hero” for his service to the country in the Iraq War.