Democratic congressional candidates are revolting against Nancy Pelosi in even bigger numbers, amid fears that her grip on power could hurt the party's chances in the midterms and hold back its next generation of leaders.

The list of candidates refusing to support the California Democrat for speaker -- or refusing to state their position -- has steadily grown, though estimates vary.

Another count published by NBC News says over 50 Democratic candidates and incumbents would not support Pelosi for speaker —should the party take back the 23-seat majority from Republicans.

Rashida Tlaib, who just won a House Democratic primary in Michigan, was the latest to come out against Pelosi for speaker.

“Probably not. That’s my answer, no. Probably not,” Tlaib said on CNN’s “New Day” Thursday when asked if she would support Pelosi in a vote for speaker. “For me, I need someone that, again, is connected with the different levels of poverty going on, the fact that there are structures and barriers for working families in my district that need to be dismantled, and supporting big banks and supporting efforts that I don’t think put the people first is troubling.”

Tlaib said constituents in the district she hopes to represent—the Detroit metro area—don’t feel like they are “being heard” in Washington.

“I think that starts at the top with leadership,” Tlaib said.

Pelosi's prominence, meanwhile, has served as a political weapon for Republicans, as it has across numerous election cycles.

Though the race has not been officially called, Republican Troy Balderson has claimed victory in that close contest.

The National Republican Congressional Committee has put out an ad campaign tying many Democratic candidates to Pelosi and her policies.

“Democrats cannot escape the Nancy Pelosi leadership conundrum. Her potential return to the speakership should be a rallying cry for every Republican to get out and vote in November,” Republican National Committee spokesman Steve Guest told Fox News in a statement Friday. “Her number one priority would be to reverse the great American comeback ushered in by President Trump and Congressional Republicans.”

The Pelosi question also has led to some awkward TV moments for Democratic candidates.

Before this week's election, O'Connor was pressed by MSNBC’s Chris Matthews on whether he would vote for Pelosi as speaker if he were elected to the House.

“We need new leadership on both sides, the old ways aren’t working,” O’Connor said repeatedly. But when pressed on what he would do if Democrats absolutely needed him to vote for Pelosi to stop Republicans from keeping the speaker’s gavel, he admitted he'd support “whoever the Democrats put forward.” He later reiterated that he would not support Pelosi. 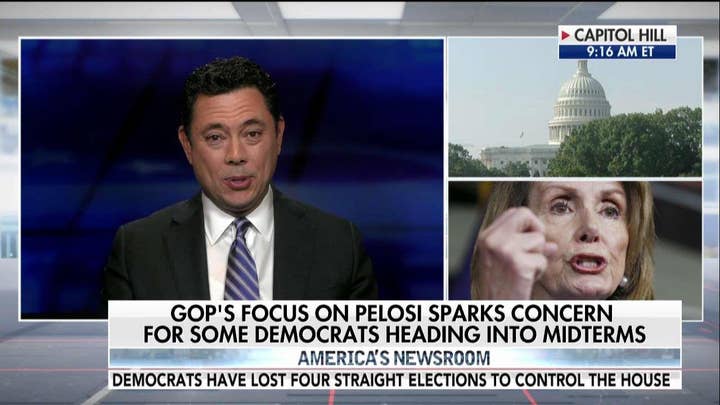 Meanwhile, liberal darling Alexandria Ocasio-Cortez, who beat Democratic Caucus Chairman Rep. Joe Crowley, D-N.Y., in her primary, stumbled when asked whether she considers Pelosi the leader of the House Democrats.

Struggling to smooth her answer, Ocasio-Cortez said it was too soon to “get ahead of ourselves.”

“I've got to win my race first,” she said. “We've got to look at winning the House back in November and then once the House is won, we have to make that decision from there.”

Pelosi, though, has downplayed the pushback and the attack ads against her, and is focusing on taking back the majority.

“Leader Pelosi has always enjoyed the overwhelming support of House Democrats and that will continue into the majority she’s so focused on winning,” Pelosi spokesman Drew Hammill told Fox News in an email Friday.

Hammill also noted that Pelosi has not, at this point, asked anyone for support for her speaker candidacy.

Last month, Pelosi claimed that some the calls for her to relinquish power in the Democratic Party were sexist. In an interview with Rolling Stone, Pelosi was asked whether she had ever been “tempted to step away” from her current post as House minority leader.

Pelosi suggested a double standard was at play, compared with men in leadership positions.

“I think some of it is a little bit on the sexist side—although I wouldn’t normally say that,” Pelosi said in the interview. “Except it’s like, really? Has anyone asked whatshisname, the one who’s the head of the Senate?”

Pelosi seemed to momentarily forget Senate Majority Leader Mitch McConell’s, R-Ky., name, and was reminded by an aide during the interview.

“McConnell,” she corrected. “I mean he’s got the lowest numbers of anybody in the world. Have you ever gone up to him and said, ‘How much longer do you think you’ll stay in this job?’… Nobody ever went up to Harry Reid and said that. Nobody ever says that to anybody except a woman. But it’s a thing.”