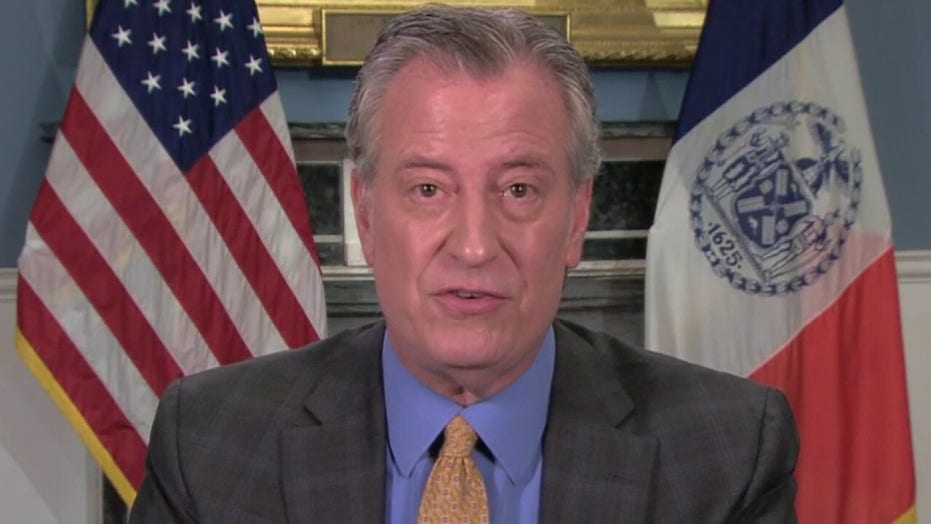 New York City Mayor Bill de Blasio doubled down Wednesday on his criticism of those involved in a large gathering at a Jewish funeral in Brooklyn — but also apologized for his overnight warning to the Jewish community as a whole that threatened future arrests.

Jewish groups had accused the mayor of unfairly singling out their community, which faced a string of attacks this past winter, with that tweet.

The mayor stated during a Wednesday press briefing that he spoke out of "frustration" and "anger" after witnessing a crowd that he said violated social distancing requirements meant to curb coronavirus transmission, but that he has love for the Jewish community.

"I regret if the way I said it in any way gave people a feeling of being treated the wrong way, that was not my intention," de Blasio said. "It was said with love, but it was tough love.”

De Blasio had tweeted Tuesday night after police in Williamsburg broke up the funeral of Rabbi Chaim Mertz, specifically calling out Jews instead of only giving a general warning to the city.

“My message to the Jewish community, and all communities, is this simple: the time for warnings has passed,” de Blasio wrote. "I have instructed the NYPD to proceed immediately to summons or even arrest those who gather in large groups. This is about stopping this disease and saving lives. Period."

The tweet was met with criticism, including from New York City Councilman Kalman Yeger, who is Jewish.

“Mr. Mayor, your words are unacceptable,” Yeger tweeted. “To condemn our entire community over one group of people is something you would not do to any other ethnic group, and I know you long enough to know that you know this.”

De Blasio claimed Wednesday that he did not mean to be hurtful, but he did not regret the underlying intent of warning against large crowds.

"If in my passion and in my emotion I said something that in any way was hurtful, I’m sorry about that, it was not my intention," he told reporters. "But I also want to be clear, I have no regrets about calling out this danger and saying we’re going to deal with it very, very aggressively.”

The mayor said he has "a lot of love" for the Jewish community and that, as far as large gatherings go, "if I see it in any other community, I’ll call that out equally.” De Blasio said Tuesday night's funeral was the largest gathering he had seen or heard about in any community during the pandemic.

De Blasio and NYPD Commissioner Dermot Shea acknowledged that police were informed by the community in Williamsburg following Rabbi Mertz's death and were notified that a funeral would be taking place. Shea said that officers were sent to the scene in case it got out of control, and were able to disperse the crowd quickly, issuing 12 summonses.

Just months ago, the city and its surrounding area saw a wave of physical attacks and harassment against Jews. De Blasio was asked about whether his words could pose danger to the city's Jewish residents.

The mayor said that while he will not tolerate incidents like those that happened Tuesday, he also "won't tolerate anti-Semitism."