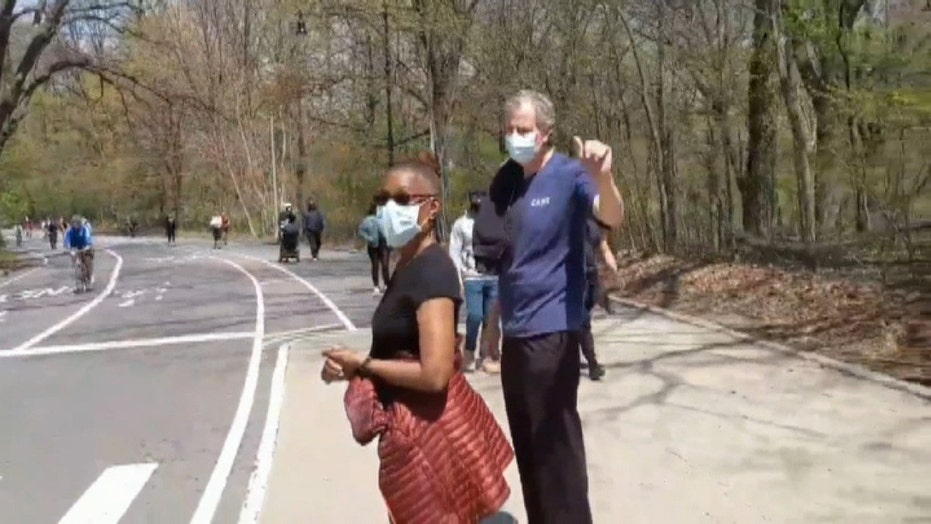 New York City Mayor Bill de Blasio is being accused of singling out his city’s Jewish community after a Brooklyn funeral was broken up by police for allegedly violating social distancing requirements being enforced during the coronavirus pandemic.

The funeral of Rabbi Chaim Mertz in the Williamsburg section of Brooklyn appeared to draw a massive crowd, as images of the scene appeared on social media. De Blasio even went to the site of the funeral with police before posting a tweet that touched off the backlash.

“My message to the Jewish community, and all communities, is this simple: the time for warnings has passed,” de Blasio tweeted Tuesday night. "I have instructed the NYPD to proceed immediately to summons or even arrest those who gather in large groups. This is about stopping this disease and saving lives. Period."

The mayor’s response drew swift condemnation. While critics did not appear to dispute whether the funeral was a violation of social distancing rules -- which call for staying at least six feet apart and limit large gatherings -- they questioned de Blasio’s language toward the city’s Jewish population over the incident, months after a rash of anti-Semitic attacks in the New York metropolitan area.

“Mr. Mayor, your words are unacceptable,” Yeger tweeted. “To condemn our entire community over one group of people is something you would not do to any other ethnic group, and I know you long enough to know that you know this.”

Washington Examiner executive editor Seth Mandel also accused de Blasio of being harsher against Jews than he would be against others.

“There's only one community you would address this way. And it's the one that just went through a pogrom on your watch, as you let it happen,” Mandel said, referring to the string of incidents where Jews were attacked or harassed this past winter.

“Hey @NYCMayor, there are 1mil+ Jewish people in #NYC. The few who don’t social distance should be called out — but generalizing against the whole population is outrageous especially when so many are scapegoating Jews,” Greenblatt said. “This erodes the very unity our city needs now more than ever.”

Seffi Kogen of the American Jewish Committee said that de Blasio’s statement is particularly bad given that his city is home to the greatest number of Jews in the country.

“It is NEVER ok for an American elected official to single out the Jewish community like this,” Kogen said. “That de Blasio is the mayor of the most Jewish city in the country makes this that much worse.”

The mayor has not only targeted Jewish gatherings. Earlier this month, police broke up a Brooklyn gathering where at least 60 people were issued summonses and at least two were arrested. Local NBC news coverage indicated that at least several of those involved were black residents.

De Blasio has also gotten support from segments of the city’s Jewish population in the past. Leaders of the Satmar Hasidic sect reached out to their community in August, calling for donors to help de Blasio qualify for a Democratic debate during his short-lived presidential campaign. According to the New York Post, the pitch was trying to garner 10,000 donors although after three weeks only 670 people had joined in, raising $868.

De Blasio's response to the Jewish funeral is just the latest controversy surrounding his handling of the coronavirus pandemic. A request for New York residents to snitch on social distancing violators by sending images to a city hotline drew derision – and a flood of obscene images.

City officials also questioned his decision to name his wife the head of a coronavirus racial inequality task force.

The mayor also had basketball hoops at 80 city courts taken down to keep people from playing, even after he himself had been criticized for flouting social distancing practices by engaging in recreational activities. He was spotted by CNN reporter Andrew Kaczynski at a Brooklyn gym in the middle of March, and was seen this past weekend going for a stroll with his wife in a Brooklyn park, 12 miles from their Manhattan home which is already situated in a park.

Other decisions that have been called into question include his hesitancy in shutting down schools and his encouragement of people to still go out in public in mid-March, saying, "If you love your neighborhood bar, go there now."

Two weeks later, he threatened to permanently shut down synagogues and churches that held services.