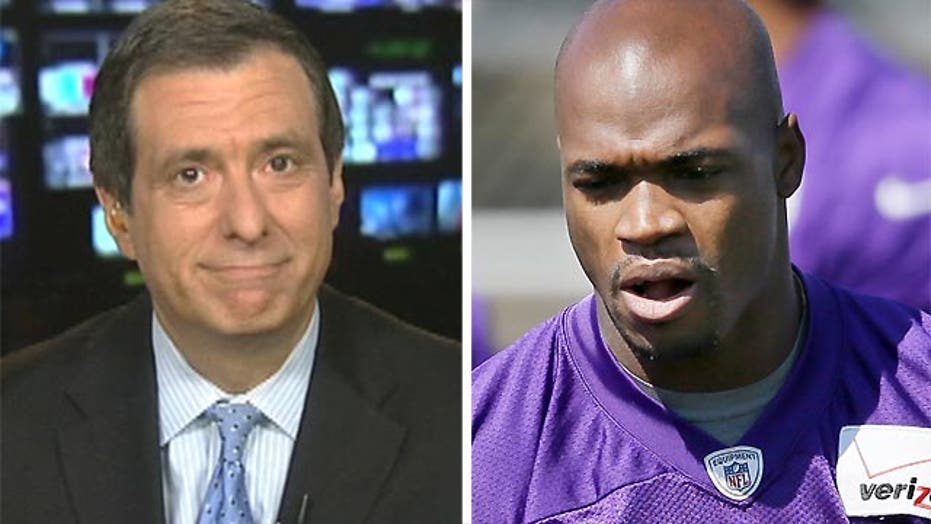 Kurtz: Time for a healthy debate about spanking

On the long list of issues facing the country, I would not have guessed that in 2014 we would suddenly be having a debate about spanking.

But Adrian Peterson of the Minnesota Vikings changed that. Peterson, as you probably know, was indicted for child abuse for hitting and bruising his 4-year-old son. In the past, Peterson (who is appealing) would probably not have missed a game. But in the wake of the Ray Rice uproar, which led to the Baltimore Ravens belatedly releasing him, the Vikings quickly sidelined Peterson.

Since Peterson insists he did nothing wrong—and other athletes like Charles Barkley rushed to his defense—it was inevitable that a media debate would take root. What I did not expect to see was this Facebook post by CNN’s Chris Cuomo.

The co-host of “New Day” began by saying he has interviewed guests “who say Adrian Peterson is a good man and a good and loving parent. They also say he made a mistake…The reality is he almost undoubtedly broke the law. Call it spanking, switching, discipline, punishment, whatever you want… what he did is a crime under the law. And the law is a ridiculously low bar at that.”

But then the essay took a decidedly personal turn:

“Are you reading this and saying: ‘Cuomo, mushy lefty, he doesn't know.’ Well let me tell you, you don't know me and my history and my disposition any more than I know you. I have been physical – too physical – with my kids in the past. Especially my son. And I hate myself for it. Because it was wrong. Because it was a way for me to express my frustration and anger under the misguided principle that it was good for him. It wasn't good. It made him fear me, not respect me. It didn't make his behavior better. It made it worse. And I used all the same justifications we are hearing in society surrounding the Adrian Peterson situation right now.
“But I am more lucky than most. I am married to a woman who is a much better person than I am. She insisted that being physical would not be part of our parenting.”

That got my attention. And must not have been easy to write.

This is not unlike Meredith Vieira or Carol Costello telling viewers about past experiences with boyfriends who beat them. It’s an anchor using a painful personal experience to galvanize a debate of public importance.

I’m just learning that spanking is outlawed in almost 40 countries, including Germany, Israel, New Zealand, Spain and Kenya. But according to one survey, about 94 percent of Americans with 3- and 4-year-old kids say they spanked their children in the previous year.

“Many observers draw a distinction between what Peterson is accused of doing — hitting his son with a ‘switch’ that left cuts, slash marks and bruises on several areas of the boy’s body — and the traditional definition of spanking: smacking a child on the bottom with an open hand.”

Peterson, for his part, has said in a statement: “I want everyone to understand how sorry I feel about the hurt I have brought to my child. I never wanted to be a distraction to the Vikings organization, the Minnesota community or to my teammates. I never imagined being in a position where the world is judging my parenting skills or calling me a child abuser because of the discipline I administered to my son. I have to live with the fact that when I disciplined my son the way I was disciplined as a child, I caused an injury that I never intended or thought would happen.”

By the way, thanks to TMZ, we now know this:

“The Minnesota Vikings running back had at least five children out of wedlock and could have had as many as seven, according to one of his ex-girlfriends.”

The likes of Charles Barkley have rushed to Peterson’s defense. The former basketball star told CBS: “Whipping—we do that all the time. Every black parent in the South  is going to be in jail under those circumstances.”

How is public opinion faring? The Huffington Post reports:

“The vast majority of Americans think what NFL running back Adrian Peterson allegedly did to his 4-year-old son -- a spanking that left bruises and breaks in the skin -- should be illegal, a new HuffPost/YouGov poll found . But most still say spanking in general should be legal.

“According to the poll, which was conducted after Peterson was indicted on charges of abuse, 81 percent of Americans think spanking with a hand should be legal. Only 9 percent think it should be illegal.

“But even spanking with the hand goes too far, many experts say. Studies have shown a correlation between corporal punishment and negative behaviors like aggression and future criminal activities, as well as altered brain chemistry.

Clearly this is an issue that is reverberating far beyond the world of sports. As Cuomo puts it: “So while we in the media and you, frankly, are only too eager to point the finger at the NFL and show how reprehensible its conduct has been… How about the rest of us and society?”

Society seems somewhat conflicted. It’s a very personal decision. But under a bright media spotlight, the kind of whipping that inflicts bodily injury is getting harder to defend.