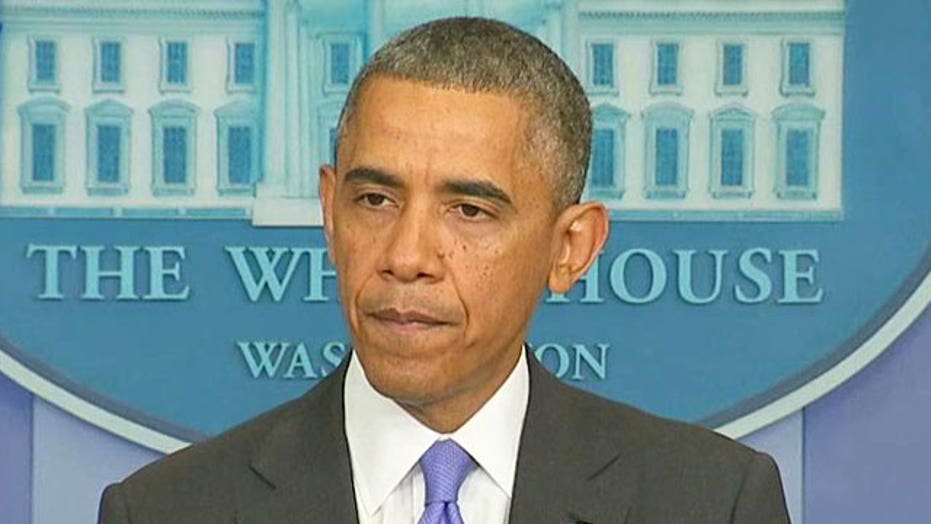 WASHINGTON – Critics from both sides of the aisle took on President Obama’s last-minute “fix” to his signature health care law Thursday, with some Democrats saying they remained “concerned” while Republicans renewed calls for delaying its implementation.

Obama, under pressure to correct one of the plan’s most glaring problems, offered a solution that would allow people to keep their current insurance policies for another year, even if their coverage doesn’t meet the minimum requirements under the Affordable Care Act.

However, the president’s proposal fell flat with Republicans and even some Democrats.

The insurance industry also weighed in, warning Obama’s move could destabilize its market and even result in higher consumer premiums.

The president spoke just 24 hours before a vote was scheduled in the House Friday on a bill giving people the option to keep their current health insurance plans if they want them - even if those plans don’t meet the minimum ObamaCare standards for coverage.

The bipartisan criticism of Obama’s remarks was swift.

“Enough with the temporary fixes and deadline extensions,” Sen. John Cornyn, R-Texas, said in a written statement after Obama spoke. “We should dismantle this law, so Americans can choose the insurance plan that works for them, not President Obama.”

Energy and Commerce Committee Chairman Fred Upton, R-Mich., said, "Our main priority should be helping the American people. Today's abrupt pivot comes after the White House has spent the last week attacking our thoughtful approach to begin to give peace of mind to those folks worried about losing their affordable health care."

The House is planning to vote on a bill by Upton Friday that would allow insurers to continue selling insurance plans that would otherwise be banned under the law, which the White House has threatened to veto.

Oregon Democrat Sen. Jeff Merkley said he believed the one-year fix doesn’t go far enough but was “a step in the right direction.”

Sen. Tom Harkin, D-Iowa, said he was still “concerned about people having policies which don’t do anything. They’re just junk policies.”

Echoing the frustration he said many in his party have with the rollout, he added “I want it fixed so the Affordable Care Act will succeed … not be torn down.”

But he also said, “I don’t think we should have done what we did today, quite frankly.”

“The president’s guidance is a great step forward,” said Sen. Mary Landrieu, D-La. But, she added, “I’m going to continue to work with the leadership. I’m open to working with Democrats and Republicans if there is a legislative fix that’s also necessary.”

Landrieu is sponsoring a bill that would extend current insurance plans indefinitely.

House Speaker John Boehner said he was “highly skeptical” the Obama administration would be able to fix the problems with ObamaCare administratively, as the president suggested.

Boehner, a Republican from Ohio, has recently ramped up his criticism of ObamaCare, calling it “a rolling calamity that has to be stopped.”

“This is going to destroy the best health care delivery system in the world,” Boehner said moments before the president’s remarks.

The president also drew criticism from the insurance industry, now charged with implementing his "fix."

“The only reason consumers are getting notices about their current coverage changing is because the ACA (Affordable Care Act) requires all polices to cover a broad range of benefits that go beyond what many people choose to purchase today,” America’s Health Insurance Plans’ President Karen Ignagni said following Obama’s comments.

“Changing the rules after health plans have already met the requirements of the law could destabilize the market and result in higher premiums for consumers,” she warned

During his remarks, Obama also apologized to members of his own party for denting their credibility among constituents.

“I think it’s legitimate for them to expect me to have to win back some credibility on this health care law in particular and on a whole range of these issues in general,” Obama said.

He also apologized to millions of Americans who have been receiving cancellation letters from their insurance providers.

“I completely get how upsetting this could be for many Americans,” Obama said.

White House officials said they will send a letter to state insurance commissioners specifying that current plans sold to existing customers will not be considered out of compliance with the health care law in 2014.

That means insurance companies don’t have to drop current customers for at least a year.

Part of the problem was that the ObamaCare law specified what needed to be covered, which was basically everything including the kitchen sink.For example, couples in their 60’s got canceled because their insurance did not have pre-natal coverage. Obama’s fix basically buys some time for millions of Americans in danger of being dropped by their provider.

“I am confident that by the time we look back on this next year, people are going to say, ‘this is working out well,’” Obama said.