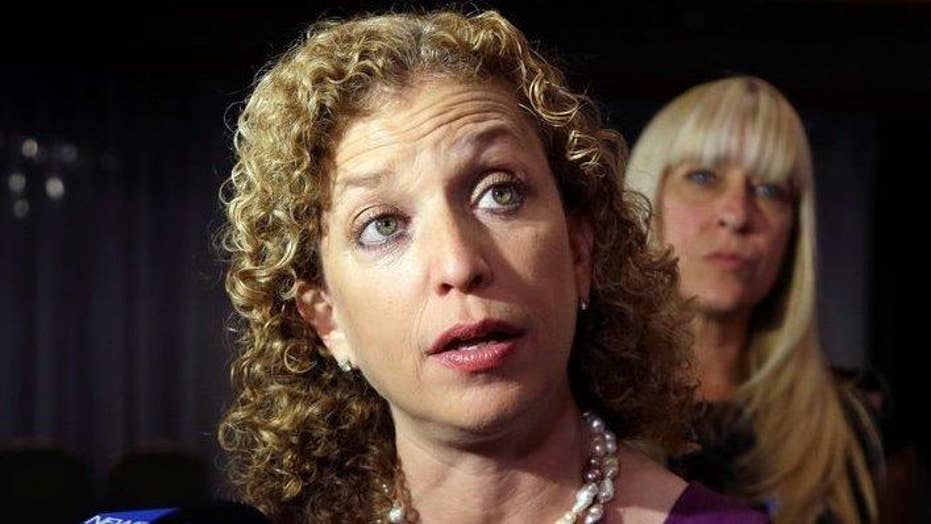 Will Wasserman Schultz be sacrificed to save Hillary?

Democrats are reportedly looking to oust Debbie Wasserman Schultz as DNC chair before the convention? Is this the only way Bernie Sanders' supporters will ever get behind Clinton? Dem strategist Joe Trippi goes 'On the Record'

Bernie Sanders returned to Washington Thursday for a high-stakes meeting with President Obama – and later, Harry Reid – where one of his key demands in exchange for a chance at party peace could be nothing less than the removal of Democratic boss Debbie Wasserman Schultz.

The Vermont senator, whose Democratic presidential campaign is still kicking despite Hillary Clinton clinching the nomination earlier this week, sat down for an Oval Office meeting with the president Thursday morning. Fox News has learned Wasserman Schultz’s leadership of the Democratic National Committee is one issue he could bring up in the unity huddle.

Sanders and the DNC chairwoman have been at odds for months, with Sanders’ team long accusing her of helping now-presumptive nominee Clinton.

Whether Sanders seeks – and the president would even consider – a Schultz sacrifice is the open question.

“I don’t see how she makes it through the convention,” one Democratic lawmaker told Fox News. “The key to Hillary winning is getting Sanders supporters on board.”

So far, Obama and even Clinton have resisted applying public pressure on Sanders to drop out, though their patience may soon wear thin. Thursday’s meetings will be a chance to test what it is Sanders is looking for, with party leaders eager to bring his millions of supporters back into the fold.

Speculation over Wasserman Schultz’ position has swirled for months, however, and so far she has retained the public support of the White House. Obama also endorsed her earlier this year in her House primary battle.

Asked Wednesday about the possibility of Sanders seeking her removal during meetings Thursday with Obama and Senate Minority Leader Reid, D-Nev., Wasserman Schultz said she’s not worried about her job.

“I'm going to be remaining as the chair of the Democratic National Committee as President Obama has asked me to do until January 21, 2017, and I appreciate the president’s support,” she said.

As for concerns about being able to unify the Democratic Party, she said: "I’m very confident that we are going to be unified."

Still, Fox News has learned some factions in the Democratic Party as well as Sanders loyalists have pushed for Rep. Tulsi Gabbard, D-Hawaii, as a potential replacement at the helm of the DNC. Gabbard is a Sanders supporter, which could help with outreach to Sanders backers and bring Sanders himself into the fold.

When asked if she was interested in being party chair, Gabbard told Fox News she was not.

She also noted she has not called for the DNC to relieve Wasserman Schultz of her duties.

Gabbard said she has no plans at this point to meet with Sanders in Washington on Thursday.

However, Gabbard said Sanders should continue to fight through the convention.

“If you look at the people who voted for Sanders, their voices should be heard,” Gabbard said.