Democratic presidential contender Cory Booker promised on Saturday to “bring a fight” to the National Rifle Association (NRA), calling for a range of gun control reforms as part of a hometown launch for a national campaign tour.

“We won’t wait for more thoughts and prayers for communities that have been shattered by gun violence from Pittsburgh to Parkland to Charleston,” he told the crowd in Newark, where he served as mayor for seven years before becoming a senator. “We will pass universal background checks, we will ban assault weapons and close loopholes that allow people who never should have a gun to get one.”

“And folks, we will bring a fight to the NRA like they have never, ever seen before -- and we will win,” he said.

Booker’s remarks mark the start of a two-week tour across America for the 2020 hopeful, who has at times struggled to distinguish himself from the large pack of Democrats seeking the party’s nod and has languished in single digits in polls.

He also made a call for national unity and for Democrats to fight “from higher ground” in an increasingly partisan and frequently toxic political environment. 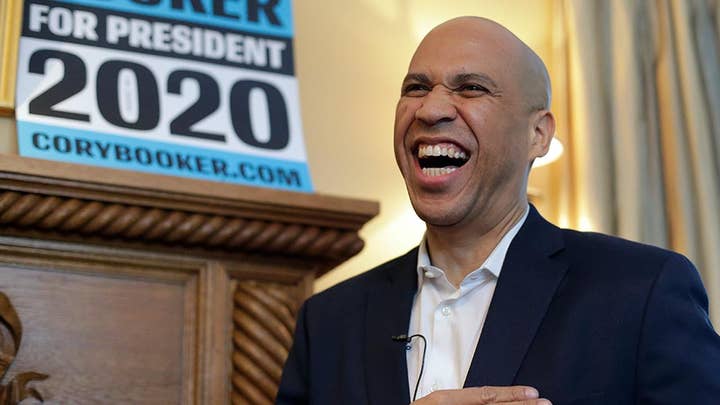 "Critics will tell us that a campaign powered by grace and love and a deep faith in each other" cannot prevail, Booker said. "But I say it's the only way we win. The president wants a race to the gutter and to fight us in the gutter. To win, we have to fight from higher ground in order to bring this country to higher ground."

At the rally, he pushed his own bipartisan credentials -- namely the criminal justice reform bill he worked on, which was signed into law by President Trump last year. He is likely to continue to promote that work when he travels to states such as Iowa, Georgia  and Nevada as part of his tour.

While Booker has thus far failed to generate the kind of buzz that has followed candidates such as Beto O’Rouke and Pete Buttigieg, his aides say that the campaign’s philosophy offers some home. That philosophy? “You’ve got to organize and get hot at the end.”

“We’re not building this campaign to win a poll in April of 2019. We’re trying to win the election in February of 2020, in March of 2020, in April of 2020. This is a long race where there’s going to be a lot of ups and downs,” Booker campaign manager Addisu Demissie told Fox News this week.

The campaign is directing most of its firepower to Iowa, New Hampshire, Nevada and South Carolina, the four states will kick off the presidential primary and caucus calendar in February and can provide crucial momentum for the primaries to follow.

“We’ve built our operation with the intention of having the strongest operation in the states on the front end of the primary calendar,” he said.