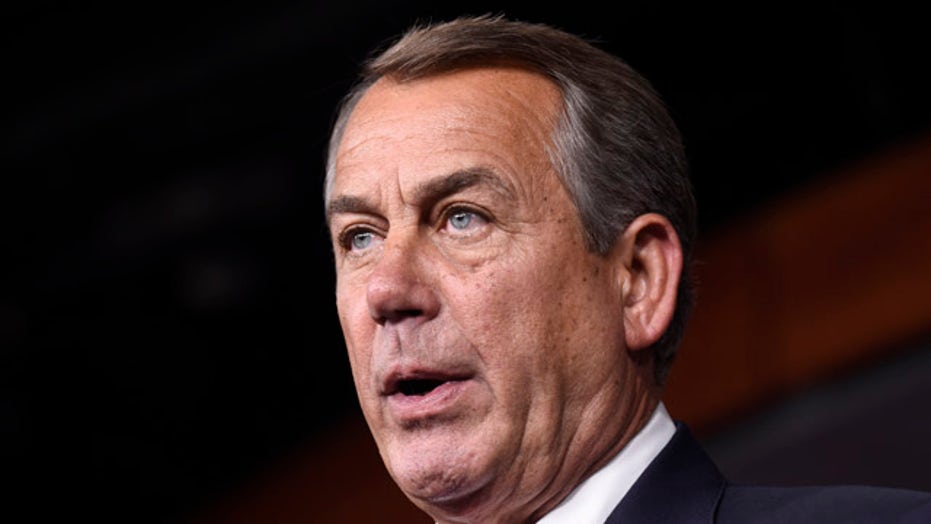 When it’s about Iran, de-funding Planned Parenthood and sanctuary cities.

And when it’s about an obscure Washington institution called the Export-Import Bank, Department of Veterans Affairs hospitals, the tax code, the federal deficits and the August congressional recess.

House Speaker John Boehner, R-Ohio, is fond of saying members of Congress conduct policy in a political setting. And the calisthenics over the past few weeks on the highway bill attests to his thesis.

Federal highway dollars expired at the end of July, and Congress again rushed to plug the dyke. For starters, the House approved a five-month bill to keep federal transportation programs afloat in mid-July. Then the Senate crashed through a six-year, bipartisan bill authored by Senate Environment and Public Works Committee Chairman Sen. Jim Inhofe, R-Okla., and the top Democrat on the panel, Sen. Barbara Boxer, California.

Senate Majority Leader Mitch McConnell, R-Ky., championed the effort, scheduling a rare Sunday session to help expeditiously complete the legislation before sending it to the House just before the start of the lengthy August recess.

But other issues intruded. Major bills often assume the mantle of “Christmas trees” right before major congressional recesses. That’s because lawmakers attempt to adorn those bills with every possible legislative bauble and ornament available. That’s where de funding Planned Parenthood came in. There was sanctuary cities tinsel. Export-Import Bank bubble lights and garlands for the Department of Veterans Affairs.

Call it Christmas in July.

But McConnell knew better than to be distracted by the shiny objects if he was going to wrap up his longer-term bill. He permitted but two decorations on this tree: one important to Democrats and one crucial for Republicans.

One amendment would reauthorize the Export-Import Bank, which helps American firms conduct business abroad and that expired in June. The other would repeal the Affordable Care Act.

Neither has anything to do with funding highway construction programs. But sometimes that’s the cost of doing business in the United States Senate. And, the spare ornamentation might actually help senators complete the bill and not find other distractions.

He decried the ObamaCare de-funding effort as a “show vote” -- particularly since stripping dollars for the health care program didn’t have the support to clear a procedural hurdle let alone become part of the highway bill.

Meantime, it was clear from the outset that the Ex-Im Bank commanded enough yeas to clear the procedural threshold and be attached to the legislation.

The Senate approved the bill -- wishing the House might entertain it before its members fled the Capitol for August. But House Majority Leader Kevin McCarthy, R-Calif., promptly squelched those hopes.

“We are not taking the Senate bill,” declared McCarthy, fretting about dumping a 1,000-page bill on his members just days before escaping the Beltway.

At that point, the House had already approved an interim highway bill stretching through mid-December. But the House GOP brain trust then rolled out a three-month patch through late October. The House was slated to depart Washington on July 30. But the House quickly approved the three-month measure, and McCarthy cut everyone loose a day early on July 29.

Ironically, even though the House was out of session on July 30, dozens of House members were spotted walking around the Capitol complex that day. Many had important meetings scheduled and didn’t want to cancel them.

First, it jammed the Senate with the House’s short-term highway bills. It was a take-it-or-leave it proposition. Either the Senate would swallow hard-to-pass stopgap plans or highway programs would go belly-up at the end of July. It would be the Senate’s fault and nobody could hang the responsibility on the House.

Secondly, the maneuver absolved the House of having to immediately consider the Senate’s version of the highway measure. Members of Congress from both sides seemed all right with that, despite the bipartisan structure of the Senate legislation. House Minority Whip Steny Hoyer, D-Md., noted his opposition of the Senate package and echoed McCarthy’s calendar concerns.

“In the short time that we have available, it would be not possible to consider that bill in any depth,” he said. “Certainly the Senate doesn't expect us to take a 1,000-page bill and just, you know, no questions asked and pass it and send it to the president.”

Third, the House’s decision to skip town on the Senate and its highway measure also protected its members from a nasty political skirmish.

Remember the Ex-Im Bank? Eliminating the institution is a cause celebre for the Republican right. Both the House and Senate let its charter expire at the end of June -- even though there’s sufficient, bipartisan support to renew the institution in both bodies of Congress.

The procedural vote on Ex-Im in the Senate scored a whopping 67 yeas. The vote in favor of the actual amendment racked up 64 ayes. But there’s a conservative, Tea Party-aligned core of House members who are repulsed at the prospect of reauthorizing the bank. They would have immediately balked at the Senate highway bill on those grounds alone. Any potential changes to the Senate’s bill -- including stripping out Ex-Im -- could have protracted the process and prompted the House to send an altered bill back to the Senate.

Fourth, this effort preserves a conservative policy goal. Ex-Im remains mothballed. That empowers House conservatives to return to their districts during the August recess and affirm that the Export-Import Bank is dead.

Boehner’s long expected the Senate to include a provision to reauthorize the bank in a “must-pass” piece of legislation. A long-term highway bill could constitute such a vehicle.

And even though highway programs are on life support now through late October, the onus is now on the House to author a bona fide highway measure, pass it and huddle in a House/Senate conference committee this autumn to arrive at a final, merged bill to send to President Obama.

Still, even some House Republicans want to salvage the Ex-Im Bank.

The House Rules Committee is the final gateway to the floor for most pieces of legislation. An effort to renew the bank surfaced on a rather obscure, but noteworthy vote on the night of July 28 as the GOP prepped its three-month highway measure for debate the next day.

Rep. Stephen Fincher, R-Tenn., backs the Export-Import Bank and drew up an amendment to extend its life through the fall of 2019. The Rules committee rejected the inclusion of Fincher’s amendment in debate on the emergency highway bill, but only by 7-to-6 vote.

That vote is important because members of the committee serve at the pleasure of the House speaker. The committee is set up in a way to always favor the leadership -- which for now isn’t willing to reauthorize Ex-Im.

And on the vote to include the Fincher amendment, GOP Reps. Steve Stivers, Ohio, Dan Newhouse, Washington, bucked the rest of the Republicans on the panel.

They voted yes along with all Democrats, which triggered the close vote in the Rules committee. It’s been years since the committee has experienced such a tight tally on a major issue -- and significant that not one but two GOPers voted against their fellow Republicans.

At his final press conference before the August respite, Boehner was asked by reporters about a final resolution to the highway bill when lawmakers reconvene in September.

“I’m confident as we get into this fall we’re going to have pretty smooth sailing,” chirped Boehner with a smirk, drawing laughter from the press corps.