A tour guide talks to tourists inside the Capitol's Statuary Hall on Thursday near the statue of Jefferson Davis (center, in bronze). (Alex Pappas/Fox News)

Nancy Pelosi and other Democratic lawmakers are ramping up calls to remove Confederate statues on display in the halls of Congress, bringing the raging debate over Civil War symbols across the South to Capitol Hill.

Nearly 10 Confederate-era figures are memorialized in the U.S. Capitol, each sponsored by a state. Mississippi displays Jefferson Davis, the president of the Confederacy, in Statuary Hall, for example. Virginia displays Gen. Robert E. Lee in the Capitol’s crypt.

“There is no room for celebrating the violent bigotry of the men of the Confederacy in the hallowed halls of the United States Capitol or in places of honor across the country,” House Minority Leader Pelosi, D-Calif., said Thursday.

But even as numerous cities consider taking down monuments in the wake of the Charlottesville violence at a white supremacist rally, the Democrat-led effort on Capitol Hill faces slim chances of success.

The 100 total statues on display are part of the National Statuary Hall Collection and aren’t chosen by Congress. Each state contributes two statues, chosen by their state governments, according to the Architect of the Capitol.

“These are decisions for those states to make,” Doug Andres, a spokesman for Speaker Paul Ryan, told Fox News.

One Democrat suggests he wants to change that.

New Jersey Democratic Sen. Cory Booker, believed to be mulling a possible run for president in 2020, said Wednesday he plans to introduce a bill to remove the statues from the Capitol building.

“This is just one step,” Booker tweeted. “We have much work to do.”

On Thursday, tourists packed into the halls of the Capitol on a hot August afternoon to see the monuments. Standing in Statuary Hall by the Jefferson Davis statue, one Capitol tour guide, wearing the customary red coat, informed one tour group about the latest calls to remove some of the statues.

“So we will see,” the guide told the group.

The tourists who visited the Capitol on Thursday expressed varying opinions about the proposal.

“They shouldn’t be removed. It’s part of history, whether you like it or not,” said Gary Kincaid, 82, of Sedona, Ariz.

Others said it’s time to make a change.

“It probably shouldn’t have been allowed to be put up anyway,” said Mark Armstrong, 54, an Illinois resident who is retired from the Army.

Speaking of the Confederates memorialized by the statues, Armstrong, who is black, said: “I mean, they seceded from the Union. It’s being a traitor, basically.”

Another tourist outside the Capitol said he didn’t feel strongly one way or the other about the issue, but he appreciated both sides of the debate.

Earlier this week, Democratic Rep. Debbie Wasserman Schultz called on her state to remove its statue of Confederate general Edmund Kirby Smith in the Capitol.

“It's time for Florida lawmakers to call a special session to replace Florida's Confederate statue in our nation's Capitol,” Wasserman Schultz said.

After the 2015 mass shooting at a black church in Charleston, S.C., Mississippi Democratic Rep. Bennie G. Thompson unsuccessfully pushed legislation to remove Confederate imagery from the Capitol. This week, he renewed his call.

“Confederate memorabilia have no place in this country and especially not in the United States Capitol,” Thompson said. “These images symbolize a time of racial discrimination and segregation that continues to haunt this country and many African-Americans who still to this day face racism and bigotry.”

President Trump on Thursday tweeted his displeasure with the recent push to remove Confederate symbols in cities across the country.

“Sad to see the history and culture of our great country being ripped apart with the removal of our beautiful statues and monuments,” Trump said. “You can't change history, but you can learn from it.”

The president made a slippery slope argument, asking: “Who's next, Washington, Jefferson?”

The push has accelerated in recent days after a rally of white supremacists, protesting the removal of a statue of Robert E. Lee, turned violent in Charlottesville last weekend. Since then, politicians in a number of states including Virginia, Kentucky and Maryland have called for the removal of statues. 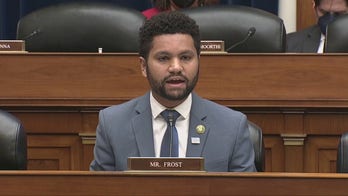