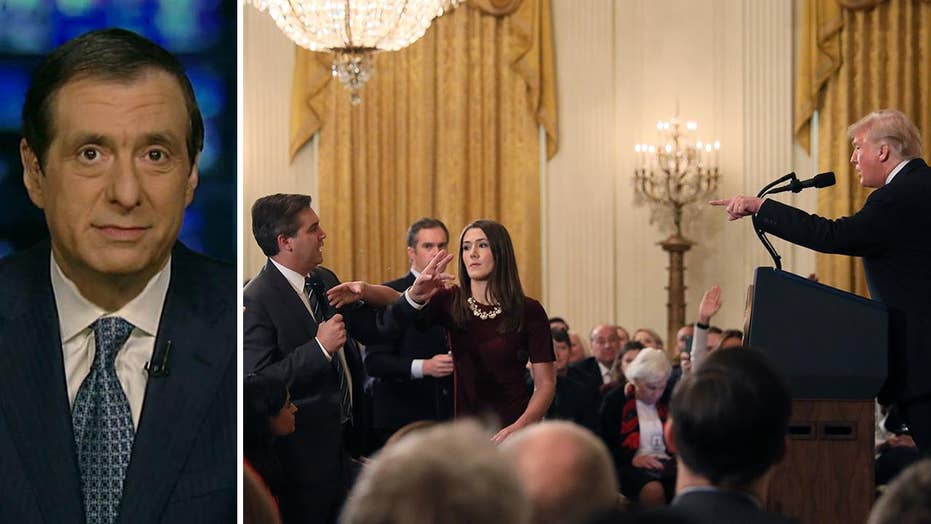 Kurtz: Why the President and Acosta both benefit from legal clash

'MediaBuzz' host Howard Kurtz weighs in on why CNN's lawsuit against Trump is more about a PR battle than the law.

Much of the news business is rushing to embrace CNN for taking legal action against President Trump.

The suit casts CNN President Jeff Zucker as a champion of press freedom, standing up to a president who is accused of violating the First Amendment.

But by taking the president to court, CNN also reinforces its image among millions of Trump supporters as part of the opposition. And the suit isn't going to get Jim Acosta's credentials restored any time soon, if at all.

Bob Woodward said at a conference that CNN was taking Trump's "bait," and he's right. But the network, in choosing to revive the Acosta controversy that was starting to die down, clearly likes the narrative.

"The First Amendment grants the right of all journalists to hold those in power accountable and ask tough questions," Zucker said in a statement.

But Sarah Sanders dismissed the lawsuit as "more grandstanding by CNN," noting that the White House has credentialed nearly 50 other staffers from the network. She said Trump had already answered two of Acosta's questions at a presser last week before the reporter "physically refused to surrender a White House microphone to an intern, so that other reporters might ask their questions." And that, Sanders said, wasn't the first time that Acosta had acted "inappropriately." (When Trump held his first presser last year, Acosta tried to interrupt by shouting questions after the president-elect had dissed CNN, and he refused to call on the correspondent.)

But Sanders notably declined to repeat her earlier charge that Acosta was suspended because he had "laid hands" on the White House intern sent to take his mic. The CNN suit calls that false, and video of the episode shows only glancing contact.

The network is seeking an injunction because "every day that his pass has been revoked is a First Amendment violation and it's irreparable harm in the words of the law," CNN lawyer Ted Boutros said on its air.

The suit is likely to drag on for months and is more about the high-stakes PR war between the two sides than resolving constitutional issues.

By going to court, CNN reframes the fight and deflects attention from Acosta's conduct to lofty principles. Even some of his White House press colleagues believe Acosta is a showman who takes an activist's approach to the job — he was lecturing Trump on the migrant caravan — and appeared rude when he kept on talking and interrupting. He's hardly the best poster boy for the First Amendment.

The president, who knew what he was getting when he called on Acosta, also gets use the correspondent and his network as a whipping boy in his assault on so-called "fake news." In fact, the lawsuit lists his previous clashes with Acosta, his criticism of CNN (including the famous wrestling video) and Trump's dismissal of CNN host Don Lemon as the "dumbest" guy on television.

Each side, in other words, is playing to its base.

Things have gotten rather personal between Zucker, who ran NBC when Trump was doing "The Apprentice," and the president, who clearly feels betrayed by the abundance of negative coverage on Zucker’s network. The fact that Zucker was a guest at Trump's wedding to Melania feels like ancient history.

I suppose it's possible that this suit will break new constitutional ground, but the great likelihood is that it will drag on for many months and do nothing to help Acosta. CNN has other White House reporters, but news organizations have an understandable conviction that no politician should be able to dictate who covers him.

But the risk for CNN, beyond big legal fees — the team includes Ted Olson — is that the network may be painting itself as part of the resistance.

Perhaps both sides are getting what they want. CNN has the backing of the White House Correspondents Association. Trump has the backing of millions of people who believe he's being treated terribly by the MSM. And while Jim Acosta may not have his hard pass, he's become famous. Maybe CNN should just let him host an opinion show since he's got so many of them.