Why are lawmakers focused on abortion when it comes to Trump's potential Supreme Court picks? Attorney Emily Compagno gives her take.

One group at the forefront of these efforts, Demand Justice, has launched what is reported to be a $5 million campaign targeting two moderate GOP senators – Susan Collins of Maine and Lisa Murkowski of Alaska.

Demand Justice is led by the former press secretary for Hillary Clinton’s presidential campaign, Brian Fallon, and is one of several groups launching an aggressive push to sway moderate senators of both parties to oppose the eventual nominee.

“The next SCOTUS pick should await the next election, but McConnell won't wait,” Fallon tweeted last week. “The future of the Court for the next 40 years - and thus the fate of abortion rights, and the ACA - may be decided in the next 3 months.”

The Washington Post reports the group's ads will start airing Thursday in Murkowski and Collins' home states. They focus on the possibility that Trump's pick to replace retiring Justice Anthony Kennedy could help the court overturn Roe v. Wade, among other major decisions.

The narrator in the ad pressuring Collins urges Maine residents to call her office and demand she "keep her word."

"Senator Susan Collins could be the deciding vote on Trump's pick for justice. She claims to support a woman’s right to have an abortion, so why won’t she rule out voting for Trump’s anti-choice picks?" the narrator says -- in a taste of what swing senators have to look forward to in the coming weeks.

Fox News reported Thursday that Trump has completed his interviews of Supreme Court candidates after speaking to six judges -- Brett Kavanaugh, Raymond Kethledge, Amy Coney Barrett, Amul Thapar, Joan Larsen and Thomas Hardiman. He is said to be focusing on Kavanaugh, Kethledge and Barrett, and is expected to announce his decision Monday.

Republicans currently have 51 votes in the Senate and would ordinarily need 50 to confirm Trump’s nominee, provided Vice President Pence votes with them to break a tie. But with Sen. John McCain, R-Ariz., out battling cancer, if Democrats can remain together and just one Republican defects from the party line, Trump’s nominee would fail to win confirmation.

Besides running ads in both Maine and Alaska, Demand Justice is one of a number of groups that plan to rally outside of the Supreme Court in Washington, D.C., next Monday – the same day that Trump is expected to nominate his choice.

Much of the ad campaigns and outreach has focused on the possibility that the next justice could provide the vote that would permit states to ban abortion. In Maine, the group NARAL Pro-Choice America plans to take out full-page ads in four newspapers to highlight this issue, as Collins is one of the few pro-choice Republicans in Congress.

“Donald Trump has been clear that his agenda is to gut Roe v. Wade, criminalizing abortion and punishing women,” NARAL President Ilyse Hogue said in a statement. “Because of this, and Trump’s admitted litmus test, the burden of proof is on the nominee to prove that they will proactively protect Roe v. Wade and until they do no senator, and particularly no senators who consider themselves pro-choice, should vote for the nominee.”

Collins has said she would not support a nominee who shows "hostility" to Roe v. Wade.

One Nation, a conservative advocacy group, has launched campaigns in numerous states with Democratic senators urging the lawmakers to “not cave to the far left by obstructing President Trump’s nominee.”

“This is merely the first step in our full-fledged advocacy campaign for the nomination and confirmation of a constitutional conservative to the U.S. Supreme Court,” One Nation President and CEO Steven Law said in a statement.

Conservative groups, further, are working behind the scenes to sway the president’s decision-making – including a whisper campaign against Kavanaugh over everything from his ties to the George W. Bush administration to a past ObamaCare ruling. While some critics have claimed that 2011 case helped pave the way for the law’s individual mandate to be upheld by the Supreme Court, others say the criticism is unfounded – and Kavanaugh actually spoke out against the mandate.

Kavanaugh remains very much in the running, however, while Kethledge’s stock is said to be rising.

Republicans, meanwhile, have ripped Democrats for their early criticism of candidates before Trump has settled on one. 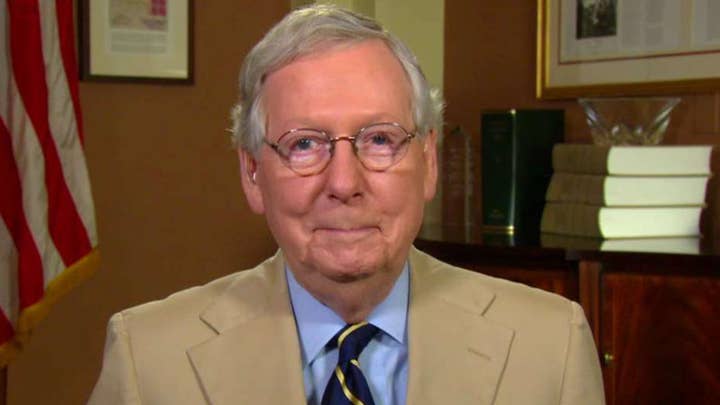 "Well it's pretty obvious they're ready to fight no matter who the nominee is," Senate Majority Leader Mitch McConnell told "Fox News @ Night" last week. "And, look, the stakes are big."