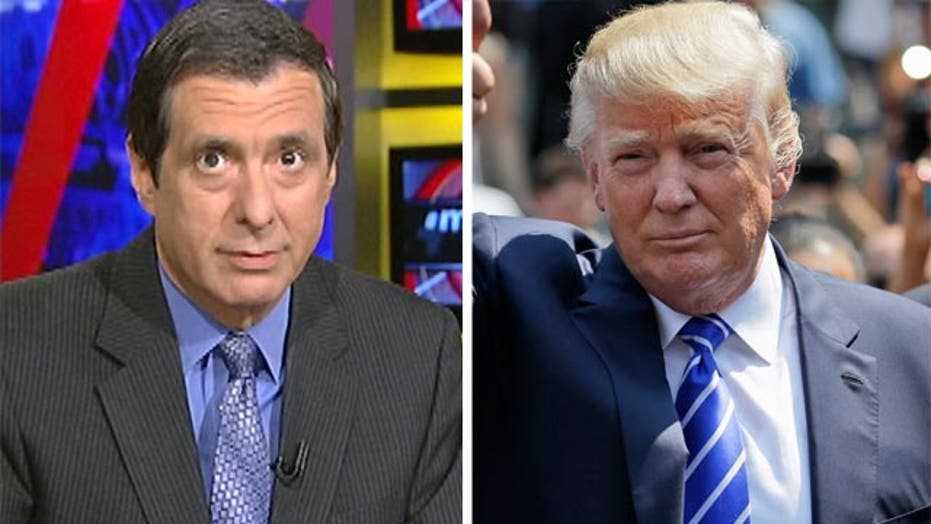 Donald Trump’s summer surge has created a deep split among conservative opinion-mongers, some of whom are openly agonizing over what he’s doing to their movement.

I haven’t seen a civil war like this on the right since the fall of 2008, when a number of conservative commentators suffered a severe backlash for arguing that Sarah Palin wasn’t qualified to be a heartbeat away from the presidency.

Some of these conservative voices in the media are usually the agenda-setters when it comes to talking up Republican presidential candidates and disparaging the Democratic opposition. So they find themselves in the strange position of trying to resist a political tidal wave.

The problem is that they are strictly judging Trump on his positions, past and present, and pronouncing him insufficiently conservative. But The Donald is not running as a movement conservative. His populist approach draws elements from the right, center and left. Of course he’s going to flunk any litmus test.

And what the pundits are slowly learning is that his fans don’t have to agree with him on every single pronouncement and aren’t concerned about past changes of position. They are drawn to his blunt talk and successful business career. And when the media attack him over this or that incident, it seems only to make him stronger.

When I interviewed Trump a couple of months ago, I told him I thought he was sending a message of tolerance by making only mild comments about the Supreme Court ruling legalizing gay marriage. He didn’t dispute that, while saying he would have preferred the issue be left to the states. Some GOP candidates who treated that as a hot-button issue, led by Mike Huckabee, are now vehemently defending the Kentucky county clerk who was jailed rather than issue marriage licenses to same-sex couples. Trump’s response? “We are a nation of laws.”

Perhaps the most passionate cry on the right now comes from Jonah Goldberg, the National Review editor-at-large who blames Trump’s supporters for betraying the conservative cause:

“And when I say ‘the people’ I don’t mean ‘those people.’ I mean my people. I mean many of you, Dear Readers. Normally, when conservatives talk about how the public can be wrong, we mean that public. You know the one. The ‘low-information voters’ Rush Limbaugh is always talking about. The folks we laughed at when Jay Leno interviewed them on the street…

“We laugh at liberals who let know-nothing celebrities do their thinking for them. Well, many of the same people we laughed at are now laughing at us because we are going ga-ga over our own celebrity.”Jonah concedes he’s upset: “If I sound dismayed, it’s only because I am. Conservatives have spent more than 60 years arguing that ideas and character matter. That is the conservative movement I joined and dedicated my professional life to. And now, in a moment of passion, many of my comrades-in-arms are throwing it all away in a fit of pique. Because ‘Trump fights!’…
“In the last month, Trump has contemplated a flat tax, the fair tax, maintaining the current progressive tax system, a carried-interest tax, a wealth tax, and doing nothing. His fans respond, ‘That shows he’s a pragmatist!’ No. It shows that he has absolutely no ideological guardrails whatsoever.”

But it also might show that many Republican voters don’t fit onto the narrow road that the Beltway types have long assumed. They are willing to tolerate departures from orthodoxy if they believe a candidate is capable of taking the country in the right direction. The party’s intellectual wing sweats the details, but most voters form overall impressions of politicians (and don’t care if one can name all the terrorist leaders).

What other Republican could get away with vowing to raise taxes on hedge fund guys? Little wonder that liberal New York Times columnist Paul Krugman, while no Donald fan, is praising Trump as right on economics and declaring, in light of 5.1 percent unemployment, that the rest of the GOP is wrong.

Not all high-profile conservatives are instinctively opposed to Trump. Laura Ingraham has said Trump is resonating with the GOP base because he says things “no one else is saying,” that “a lot of white middle class voters feel like they have been left behind” and Trump is “channeling that.”

Rush Limbaugh said over the summer that “you've got people on Fox, you have Republican Party establishment types, you've got Republican consultants who are out there now saying things about Trump that will be impossible to walk back. Meaning they're going so overboard in their criticism of Trump right now that if Trump happens to stay in this, and if Trump wins this, these people are not going to be able to just automatically rally, which is what everybody says after the nominee is chosen.”

“If you are a conservative alarmed at the country’s direction and committed to retaking the White House, you should be concerned about what Trump’s ascendancy is doing to the chances of that happening.

“The Democrats’ presumptive candidate is flailing badly. Republicans have an unusually talented field with a good chance of winning back the presidency. Do they really want to be dragged into the swamps — right now, on immigration — that will make that prospect electorally impossible?

“Yes, I understand the anger, the frustration, etc., etc., that Trump is channeling. But how are these alleviated by yelling ‘I’m mad as hell’ — and proceeding to elect Hillary Clinton?”

Another influential columnist and Fox News commentator, George Will, likens Trump to a hard-drinking loudmouth:

“In every town large enough to have two traffic lights there is a bar at the back of which sits the local Donald Trump, nursing his fifth beer and innumerable delusions. Because the actual Donald Trump is wealthy, he can turn himself into an unprecedentedly and incorrigibly vulgar presidential candidate. It is his right to use his riches as he pleases. His squalid performance and its coarsening of civic life are costs of freedom that an open society must be prepared to pay.

“When, however, Trump decided that his next acquisition would be not another casino but the Republican presidential nomination, he tactically and quickly underwent many conversions of convenience (concerning abortion, health care, funding Democrats, etc.). His makeover demonstrates that he is a counterfeit Republican and no conservative.”

But if Trump, a former Democrat, is taking on the GOP establishment and the whole collection of senators and governors with a new way of campaigning, then he’s not counterfeit. He is breaking the mold, and much of the punditocracy just doesn’t like the new model. But if the polls are any indication, many Republican voters do.