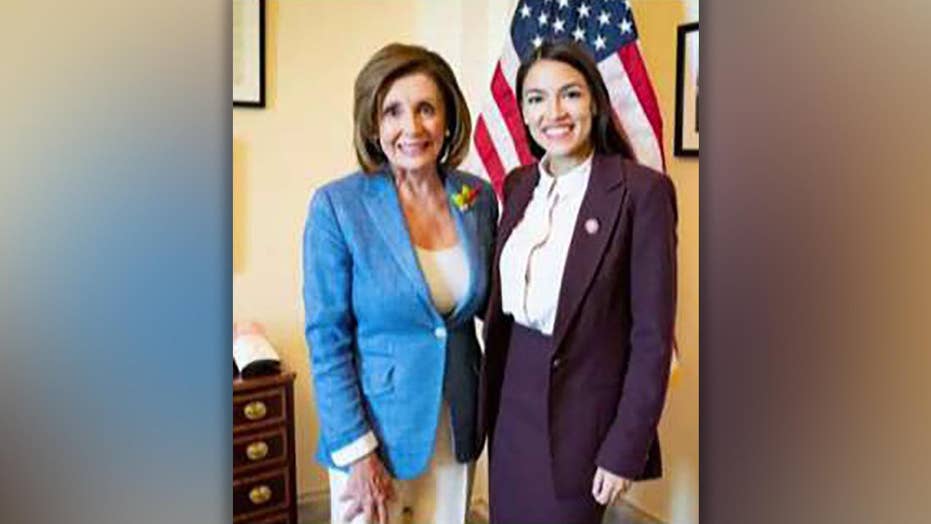 Speaker Pelosi tweets picture from her meeting with Alexandria Ocasio-Cortez

Appearing Friday on “America’s Newsroom”—both before and after Pelosi’s news conference on Capitol Hill—Wallace told host Bill Hemmer that she does politics the “old fashioned way” and Ocasio-Cortez, decidedly, does not. He said Ocasio-Cortez and other freshmen progressives are looking toward “more dramatic changes.”

Pelosi is 79 and Ocasio-Cortez is 29; there are 50 years between  them and they’ve gotten off to a rough start. Signs of tensions between the two political dynamos have been visible from the time of Ocasio-Cortez's congressional orientation, when she joined a climate protest outside Pelosi's office.

During an interview with “The New York Times,” Pelosi criticized Ocasio-Cortez and the recently nicknamed progressive “Squad” after its four members voted against a version of a border funding bill that Pelosi promoted. Pelosi noted that the group was only four people strong. Ocasio-Cortez, in turn, accused her of “singling out” women of color.

Ocasio-Cortez and her chief of staff took to Twitter to criticize the Speaker and other centrist Democrats. Pelosi then called out Ocasio-Cortez and the other three freshman congresswoman in a caucus meeting: "You got a complaint? You come and talk to me about it," Pelosi said, according to a source in the room. "But do not tweet about our members and expect us to think that that is just OK."

Ocasio-Cortez responded by saying it was “outright disrespectful” for Pelosi to repeatedly single out newly elected women of color.

“It got kind of nasty,” Wallace said.

Following special counsel Robert Mueller’s public testimony on Wednesday, President Trump told reporters the Democratic Party is in shambles: “They've got the Squad leading their party. They are a mess. This was a devastating day. For the Democrats. The Democrats thought they could win an election like this. I think they hurt themselves very badly for 2020.”

But, with the barrage of attacks from President Trump and the standing of the Democratic Party at stake, an olive branch was extended. Pelosi said their meeting was “nice” and Corbin Trent, a spokesman for Ocasio-Cortez, said, “It was a very positive and productive meeting about progressive priorities.” Pelosi told reporters, “I don’t think we have that many differences.” She said there was never any “hatchet to bury.”

“I think that they will try to turn down the heat and get along more,” Wallace said. “But there are some differences here and you can’t erase them forever. And, they’ll come back up—particularly as we get into 2020 and the direction of the party both in terms of the presidential candidacy and also in terms of the House and the message it’s sending out as it tries to—Democrats hold on to the majority.”

“The line she used, Bill, that I thought was very interesting, she said, ‘I am pushing the boldest common denominator.’ Because, obviously the left feels she’s not moving far enough, fast enough,” he added.

“We always have to remember: for all the attention that the Squad has gotten, the reason that the Democrats took back the House was because of the moderates: the people, the Democrats, who won in districts that Donald Trump won in 2018.