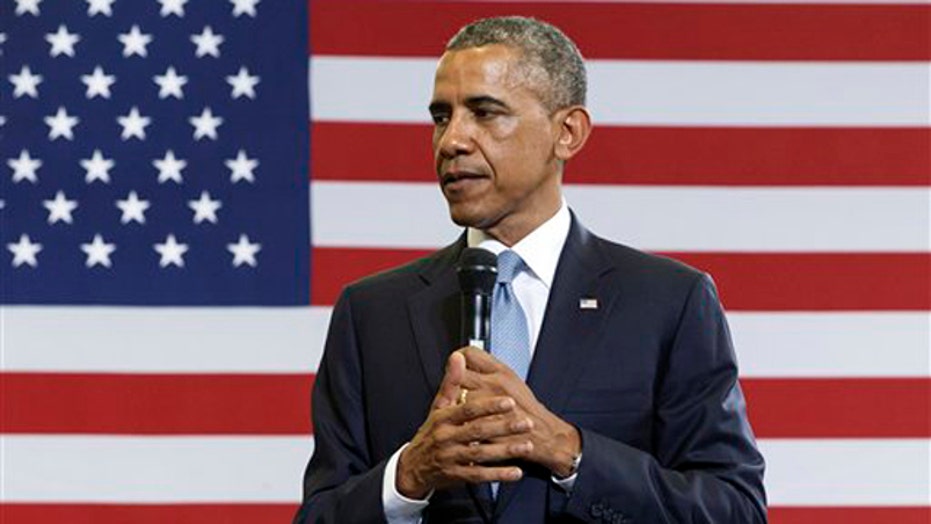 WASHINGTON – President Barack Obama met with Central American leaders Friday to urge them to help slow the stream of unaccompanied children from their countries to the U.S., as House Republicans tried to agree on their own proposed solution to the crisis at the Mexican border.

GOP lawmakers said they were attempting to unite behind a narrow package of changes including sending National Guard troops to the border, increasing the number of U.S. immigration judges and changing a law so that migrant youths arriving by the tens of thousands could be sent home more quickly. The package would cost less than $1 billion, several lawmakers said, far less than the $3.7 billion Obama requested to deal with the crisis.

A number of Republicans exiting a special meeting on the issue in the Capitol said they had to act before leaving Washington late next week for their annual August recess.

"It would be a terrible message; leave town in August without having done anything, knowing that it's going to create even more of a crisis on the border," said Rep. Charlie Dent of Pennsylvania. "Doing nothing in my view means that these children will be sent from the border back to communities like mine."

Yet some conservative lawmakers remained skeptical about taking any action. "The acceptable spending level is zero," said Rep. Louie Gohmert of Texas.

And with Senate Democrats opposed to policy changes to return the children quickly without judicial hearings, it looked highly unlikely that a deal could be struck to send a bill to Obama's desk before August.

Friday's White House meeting with the presidents of Guatemala, Honduras and El Salvador came as the administration considered creating a pilot program giving refugee status to young people from Honduras. White House officials said the plan would involve screening youths in their home countries to determine whether they qualify for refugee status. The program would be limited and would start in Honduras but could be expanded to include other Central American countries.

White House spokesman Josh Earnest said the pilot plan would be among the topics Obama discussed with his visitors. But he also said the program was meant to keep more migrants from coming to the border rather than as a way to address the thousands of migrants already in the U.S.

He said the conversations with the leaders would focus on how to deter Central Americans by convincing them that if they came to the United states "they would not be welcomed with open arms in this country." He also said the leaders would discuss how to enhance law enforcement cooperation between the U.S. and countries in the region to improve security, and how to ensure that minors who are returned to Central America don't go back to the violent conditions they were trying to escape.

At the same time, a senior Obama adviser said Friday that the White House is taking seriously the possibility that House Republicans could initiate impeachment proceedings against Obama if he acts on his own later this year on a broader immigration measure that could defer deportations for immigrants who have been inside the United States illegally for years.

White House adviser Dan Pfeiffer said that House Speaker John Boehner's effort to sue Obama over his use of executive authority "has opened the door for Republicans possibly considering impeachment at some point in the future."

"I would not discount that possibility," he said during a breakfast with reporters. "I think that when the president acts on immigration reform it will certainly up the likelihood that they would contemplate impeachment at some point."

Boehner has said he has ruled out impeachment, but conservative commentators, including former Republican vice presidential candidate Sarah Palin, have called for Obama to be impeached.

"It is telling and sad that a senior White House official is focused on political games, rather than helping these kids and securing the border," Boehner spokesman Michael Steel said.

Several House Republicans said there was some discussion in Friday's meeting of holding a vote, in concert with action on the border, to overturn an earlier Obama directive on immigration that deferred deportation for certain immigrants brought here illegally as children.

With some critics contending that that Obama directive and other presidential policies triggered the crisis, the president has been eager to demonstrate an aggressive approach to reducing the flow of immigrants and returning those found not to have a legitimate claim to stay here. The U.S. has mounted a communications campaign to inform Central American residents that they won't be allowed to stay in the U.S., and Obama sent a team to Texas this week to weigh the possibility of dispatching the National Guard to the border.

More than 57,000 minors have arrived since October, mostly from Honduras, Guatemala and El Salvador. The trio of nations has become one of the most violent regions in the world in recent years, with swaths of all three countries under the control of drug traffickers and street gangs that rob, rape and extort ordinary citizens with impunity.

In recent weeks, the number of children being apprehended daily has fallen by roughly half, but White House officials said seasonal patterns or other factors unrelated to the administration's efforts may be responsible for some of the decline.

Pfeiffer said Obama supports changes in the 2008 law that would give the administration more authority to turn back Central American migrants at the border. But he said current proposals in Congress, including a bipartisan plan proposed by Texas Democratic Rep. Henry Cuellar and Texas Republican Sen. John Cornyn, do not meet White House standards of deterring illegal migration while protecting legitimate claims for asylum from border crossers.