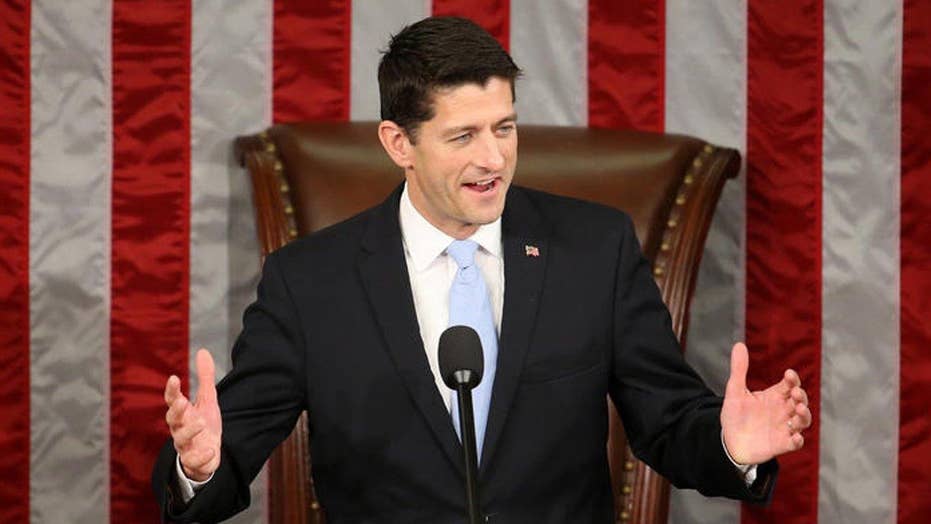 Paul Ryan in a fight to save the GOP majority

These lawmakers are expected to win re-election. That’s precisely the point. They didn’t face substantial opposition. Donald Trump is weighing down many congressional Republicans. This makes Democrats think they can get close to the 30 seats necessary to win the House. The lawmakers listed above represent districts that hold the potential to vote Democratic under the right circumstances.

But Democrats don’t stand a shot at seizing any of these right now. In addition, freshman Reps. John Katko, R-N.Y.; Lee Zeldin, R-N.Y.; and Elise Stefanik, R-N.Y., are expected to hold their seats. The GOP nabbed those seats from Democrats two years ago.

Many GOPers are desperate to decouple themselves from the virulence of Trump. In 2006 and 2008, Democrats won the House by electing conservative Democrats in “rural” districts spanning Ohio, Indiana, Iowa, North Carolina, Mississippi and Alabama.

Virtually none of those “types” of districts are in the mix this round. Instead, Democrats swelled the map of potential seats in play in educated, “exurban” districts near big cities. Some of those competitive seats this cycle include Reps. Barbara Comstock, R-Va.; Kevin Yoder, R-Kan.; Darrell Issa, R-Calif.; John Mica, R-Fla.; and the retiring John Kline, R-Minn.

But potentially winning those seats doesn’t propel Democrats to the majority. Democrats must complement possible exurban wins with victories in the countryside. Democrats have a chance at securing the district now held by freshman Rep. Bruce Poliquin, R-Maine, who flipped the seat two years ago. But one of the most endangered Democratic incumbents is Rep. Rick Nolan, D-Minn., who holds a marginally Democratically-leaning district sprawling across Minnesota’s Iron Range.

Democrats are trying to build a “wave.” Political waves resemble ocean waves. They crash into the shore at the end. But Democrats can’t go Hawaii Five-O just yet.

A bad night for Democrats means they marshal a meager 11 or 12 seats. A really good evening has Democrats securing about 22 seats. The most likely scenario is a gain of 15 to 18 seats. All these are short of the 30 needed to take control.

One thing is certain: many of these races are nail biters.

“We could have a lot of 51-49 [percent] seats tilting either direction,” said one senior House GOP operative.

There are some bellwethers to discern how election night is going.

Watch the seats held by Mica and Freshman GOP Rep. Carlos Curbelo in Florida. A defeat of Mica is a big blow. A loss of both seats signals a big night for Democrats. Curbelo is locked in one of the most challenging reelection landscapes of 2016, having grabbed the seat from former Democratic Rep. Joe Garcia two years ago. The contest is far from over, but Republicans are optimistic Curbelo will maintain the seat in a Garcia replay.

Minnesota is also a testing ground. Democrats hope to hold Nolan’s seat, claim the seat of retiring GOPer John Kline and possibly dethrone Rep. Erik Paulsen, R-Minn. If Democrats execute that hat trick (appropriate for the Gopher State), they could be well on their way to at least 19 to 20 seats.

The presidential sweepstakes could weigh heavily in House contests. Let’s say it’s a solid night for Hillary Clinton and the networks call the presidential race early. That could impact voting out west. If the result is clear while western polls remain open, do Democrats cease voting because Clinton wins? Or, does a Clinton victory embolden GOP voters to ensure a check on the incoming administration?

Those scenarios resonate most in Colorado, Utah and California. In Colorado, watch GOP Reps. Mike Coffman and Scott Tipton. Tipton struggled some a few weeks ago but seems to have stabilized. If Tipton still faces trouble, Democrats are probably approaching a 25 seat gain.

Utah is a unique study due to Trump’s unpopularity and the nascent presidential candidacy of former House GOP aide Evan McMullin. Trump is unpopular in Utah and among Mormon voters. He waged various battles with Mitt Romney and Sen. Mike Lee, R-Utah. It’s not out of the question that McMullin could win Utah. Or McMullin could split the Republican vote and potentially propel Clinton to victory in the Beehive State. Freshman Rep. Mia Love, R-Utah, is in a rematch against 2014 Democrat Doug Owens. A senior congressional Democratic source tells Fox News an unsettled Utah electorate creates a “unique turnout dynamic.” Love seems to be in good shape. But if Love does face trouble, Democrats are creeping close to 30.

California poses its own set of issues.

“Trump is a one-man wrecking crew in California,” said one Democratic operative.

“There is no reason for Republicans to go to the polls in the Senate race,” said one Democratic source.

This is why observers are watching Darrell Issa’s race along with competitive contests for Reps. Steve Knight, R-Calif., and Jeff Denham, R-Calif.

And then there’s a wild card. What happens if another Access Hollywood tape materializes?

“We will be at the gates of Hell,” lamented one senior Republican.