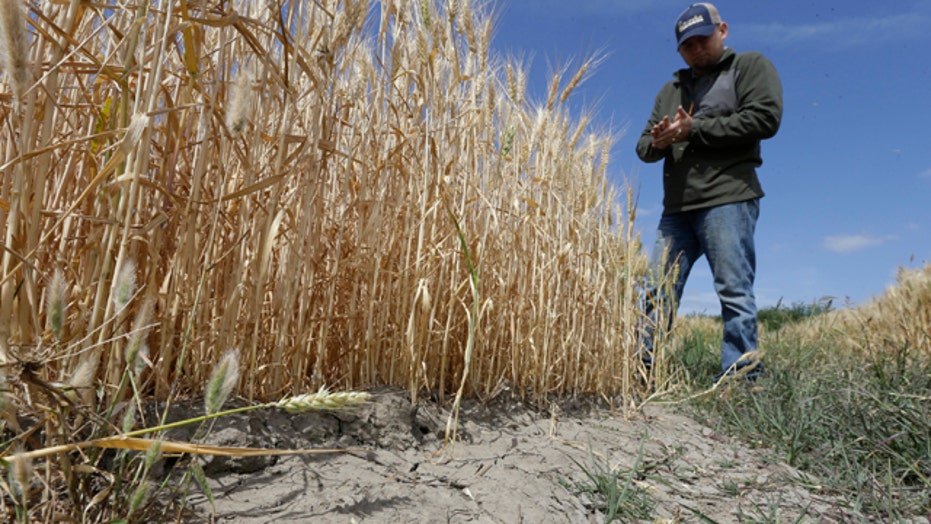 California cutting back on water use amid historic drought

New numbers show overall water use down 13.5 percent in April

California regulators ordered farmers and others who hold some of the state’s strongest water rights Friday to stop pumping from three major waterways in one of the country’s prime farm regions.

The targeted waterways provide water to farms and cities in the agricultural-rich Central Valley and beyond.

Economists and agriculture experts say growing of some crops will shift in the short-term to regions with more water, so the water cuts are expected to have little immediate impact on food prices.

The order applies to 114 entities that have claims dating back to 1914 or earlier. It will force thousands of water users in the state to tap groundwater, buy water at rising costs, use previously stored water or go dry.

"It's going to be a different story for each one of them, and a struggle for all of them," Thomas Howard, executive director of the water board, acknowledged.

There are several thousand senior rights holders who are at the last to have their water rights curtailed in times of scarcity.

It’s the first time since the drought of 1977 that the state has directed a significant number of senior water rights holders to stop pumping because of drought and amounts to the most widespread cuts ever among those with some of the state’s strongest water rights.

The state’s water law was built around preserving the water rights of those who staked claims to waterways more than a century ago or have property that abuts the rivers and streams.

Water regulators had spared the senior-rights holders until now but warn that still more cuts will be coming for farmers and others in weeks to follow.

People ordered Friday to cut back have water rights going back to 1903. Officials say they have rights to an estimated 1.2 million acre-feet for a year — more than a dozen times San Francisco's annual use — but the officials do not know how much the curtailments will save this summer.

"We are now at the point where demand in our system is outstripping supply for even the most senior water rights holders," said Caren Trgovcich, chief deputy director of the water board.

Farmers and water districts have promised court battles to stop what are the broadest incursions on record to the water allotted to senior-rights holders.

Jeanne Zolezzi, an attorney for two small irrigation districts serving farmers in the San Joaquin area, says she plans to go to court next week to stop the board's action.

She said her clients include small family farms that grow permanent crops such as apricots and walnuts, and have no back-up supplies in wells or reservoirs.

"A lot of trees would die, and a lot of people would go out of business," said Zolezzi. "We are not talking about a 25 percent cut like imposed on urban. This is a 100 percent cut, no water supplies."

Jonas Minton, an adviser at the private Planning and Conservation League environmental group, said droughts of this scale are not unprecedented in California.

What is different, he said, is that the state has grown to a population of 38 million and has vast acres of farmland to irrigate. He said state bureaucrats or environmentalists can't be blamed.

"Today's curtailments are not being done by choice," Minton said. "They're a reaction to the reality of the shrinking water supply."