Democratic presidential candidate Pete Buttigieg took a shot at social conservatives Saturday in Las Vegas as he described the exclusion he experienced after publically coming out as a gay man.

The South Bend, Ind., mayor also spoke of the need to overcome divisions during a swing stop at a gala for an LGBTQ civil rights group. He said that LGBTQ people, women, immigrants, people of color and with disabilities and workers are experiencing a “crisis of belonging in this country.”

"What every gay person has in common with every excluded person of any kind is knowing what it's like to see a wall between you and the rest of the world and wonder what it's like on the other side," Buttigieg said during his keynote address for the Human Rights Campaign at Caesar’s Palace.

MIKE PENCE HITS BACK AT PETE BUTTIGIEG AFTER CRITICISM: 'HE KNOWS BETTER'

Buttigieg, 37, a former Navy intelligence officer, described coming out while mayor and preparing to deploy to Afghanistan.

"I was seized with the awareness that I could be killed in action at the age of 33, a grown man and an elected official, with no idea what it was like to be in love," he said. "I knew that I had to be who I am."

Buttigieg also took aim at the rhetoric of social conservatives.

The audience of about 750 gave him two standing ovations. One occurred when his husband, Chasten, joined him onstage at the end of his speech.

Saturday’s appearance marked Buttigieg’s second campaign stop in Nevada this year. The mayor has surged in popularity despite having held only one public office of a city with a population of 100,000 people. 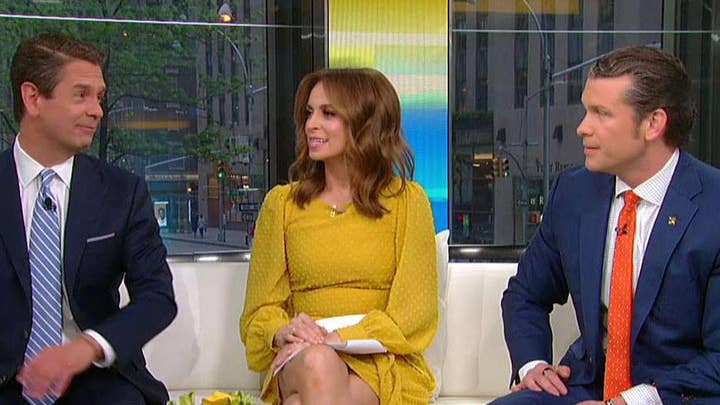 President Trump recently took aim at his young political rival during a Wednesday rally in Panama Beach, Fla. First, he called him “Boot edge edge” and then compared him to Alfred E. Neuman, the cartoon mascot and cover boy of Mad magazine.

Buttigieg also mentioned an op-ed he wrote where he came out as a gay man while Vice President Mike Pence was governor of Indiana. Pence, a devout Christian, has said homosexuality is a choice and has publically stated marriage is between a man and woman.