The life and times of George H.W. Bush

George Herbert Walker Bush took office in 1989 as the 41st U.S. president and served one term in the White House. The father of former President George W. Bush, he was a Naval aviator in World War II, a congressman, ambassador to the United Nations, envoy to China, CIA director and vice president for two terms under Ronald Reagan.

Former President George H.W. Bush will lie in state in the U.S. Capitol Rotunda next week, congressional leaders announced Saturday -- a move that has become customary to honor the passing of former presidents.

Bush, who spent a lifetime in public service and served as the 41st president between 1989 and 1993, died shortly after 10 p.m. Friday, about eight months after the death of his wife, Barbara Bush.

Congressional leaders announced that an arrival ceremony will be held for Bush on Monday at 5 p.m. ET. The public will then be invited to pay their respects from 7:30 p.m. until 7:00 a.m. Wednesday. The statement said that the Bush family will provide additional details regarding arrangements beyond the ceremony at the Capitol.

When someone lies in state in the Capitol Rotunda, the casket is placed in the center of the room on the catafalque, the wooden platform used for President Lincoln’s funeral in 1865. The casket is draped with an American flag and an honor guard stands vigil around the clock. The Rotunda is usually permitted to file past the casket after formal and family ceremonies.

The last president to lie in state was President Gerald Ford in late 2006-early 2007. President Ronald Reagan lay in state in June 2004. However, the last two people to lie in state were not presidents: Sen. Daniel Inouye, D-Hawaii, in 2012 and Sen. John McCain, R-Ariz., this year. 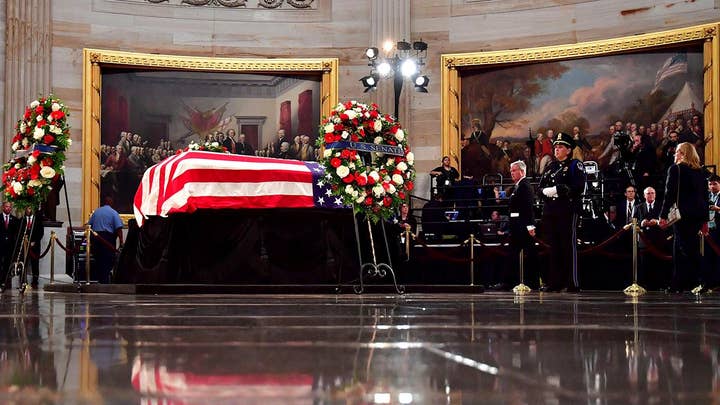 Rev. Billy Graham did not lie in state earlier this year. He lay in honor -- one step down from lying in state -- although the ceremony looks very similar.

President Richard Nixon did not lie in state in 1994, as his family thought visitors to the Capitol might not be respectful. 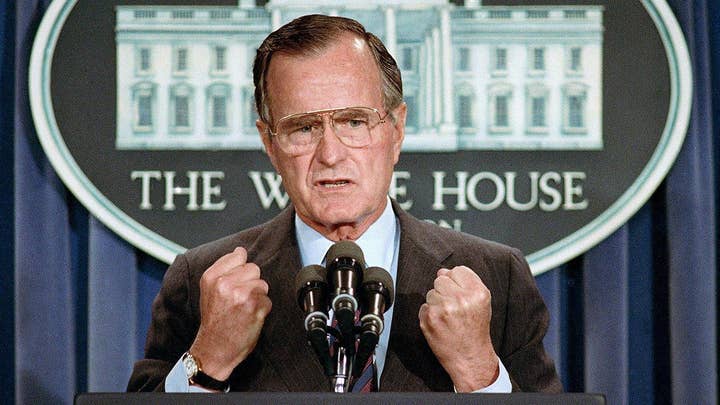 The White House said Saturday that President Trump and First Lady Melania Trump will attend Bush's funeral at the National Cathedral in Washington D.C. Trump has also designated December 5 as a National Day of Mourning.

Meanwhile, plans for a state funeral were already underway, according to The Washington Post, with events expected in Texas and Washington.,

“We, the men and women of the Department of Defense, are honored and proud to support the Bush family and will do so with the utmost respect,” Maj. Gen. Michael L. Howard of the Joint Force Headquarters National Capital Region said in a statement.

“This state funeral is a culmination of years of planning and rehearsal to ensure the support the military renders President Bush is nothing less than a first-class tribute,” he said.