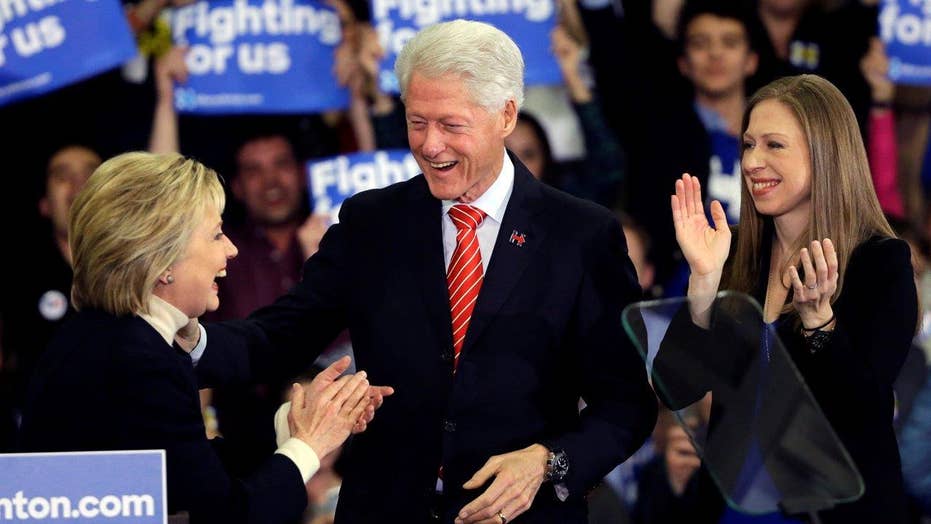 Is Bill Clinton a liability to Hillary's campaign?

BUBBA DOWNPLAYS OBAMA’S STATUS AS FIRST BLACK PRESIDENT
The man who Hillary Clinton’s supporters had hoped would be her secret weapon in maintaining support among black primary voters may have done serious damage to her already rocky nomination effort.

The former president made some off-the-cuff observations on race that are ricocheting around the left side of the Internet today. “The other thing I want to make a funny comment about is Steve Cohen’s remark that I was just a stand-in for the first black president,” Clinton said. “I’m happy to do that.”

“But you know what else we learned from the human genome?”

“We learned that unless your ancestors, every one of you, are 100 percent, 100 percent from sub-Saharan Africa, we are all mixed-race people.”

As similarly obtuse comments from actress Meryl Streep recently revealed, the idea of “we’re all Africans anyway” is not a welcome trope in the current climate of highly cultivated racial identity and grievance.

But it is especially fraught for the 42nd president who has plenty of baggage with black voters on similar topics.

Flashback to the former president’s past incidents of playing the race card when he felt his wife was in political trouble. In 2008, just ahead of the South Carolina primary, Bill Clinton tried to dismiss then-Sen. Barack Obama’s win as based only on black voters saying, “[The Obama campaign is] getting votes, to be sure, because of their race or gender, and that’s why people tell me that Hillary doesn’t have a chance to win here.”

Clinton also said, “Jesse Jackson won South Carolina in ‘84 and ‘88. Jackson ran a good campaign. And Obama ran a good campaign here.”  Clinton had to walk back the comments, and say he would help support Obama if he became the nominee.

Bernie plays up 1988 support for Jesse Jackson - WaPo: “With black voters about to play a greater role in picking the next Democratic presidential nominee, Bernie Sanders used a rally [in Dearborn, Mich.] Monday to highlight his support of the 1988 White House run of civil rights leader Jesse Jackson. Appearing at a rally organized by an auto workers union, Sanders noted that at the time he endorsed Jackson, he was mayor of Burlington, the largest city in Vermont, ‘a state that is virtually all white.’ ‘Why did I do it?’ the Vermont senator said. ‘I did it because I saw in him a man trying to bring working people together’ and create ‘a rainbow coalition.’”

Woof - WashEx: “Democratic presidential candidate Hillary Clinton barked like a dog Monday evening, as she imitated before a crowd in Reno, Nev., how she would like to fact check Republicans.”

‘The Clinton panic is palpable’ - The best known political journalist in Nevada, Jon Ralston, writes in a WaPo piece that Clinton faces real dangers in a state she previously counted as an easy win: “The new year brought new energy to Team Sanders as he used his fundraising prowess to start funneling resources into the state, opening offices, reaching out to Latinos, preparing for post-New Hampshire momentum. And now, buoyed by his landslide victory in New Hampshire, Sanders believes what would previously have been unthinkable: He could win here. The Clinton panic is palpable.”

WITH YOUR SECOND CUP OF COFFEE…
The latest edition of Wired magazine goes deep into space with a practical (or almost practical) look at what it will take for humans to move beyond our Edenic spot in this solar system, through the barren void around us and on to new places to call home. For those of us who are neither rocket scientists nor astronomers, it is as thrilling as it is informative. A great place to start for laypeople is “The 12 Greatest Challenges for Space Exploration.” As author Ann Leckie writes, “It’s a huge, dangerous, maybe impossible project. But that’s never stopped humans from bloody-mindedly trying anyway.”

OBAMA PREPARES FOR TOTAL WAR ON SCALIA PICK
In the face of a Republican refusal to allow him to install a new Supreme Court justice in the final year of his term, President Obama has a few choices.

Option one: He could admit defeat and wait for the unlikely chance to make a recess appointment.

Option two: He could find a nominee moderate enough to win 60 votes in the Senate. This would require Obama working his own party as hard as he did Republicans to find a centrist choice that could overcome bipartisan opposition.

Option three: He could pick a nominee totally unacceptable to the Republican majority in the Senate and spend several months berating Republicans for their unpatriotic perfidy.

Which one do you think it will be?

It would be a fitting end for the Obama era to close with a rancorous, unproductive struggle fought in the opinion columns and television shows the president supposedly distains. And that seems almost certainly where we are headed.

The president has the power to make a pick. The Congress has the power to refuse him. On that, all should be able to agree. But as for what happens next, the choices are mostly limited by the gifts and imaginations of the combatants.

There is a lot of lazy talk in Washington now about how the Republicans could lose the Senate over obstruction. Hogwash. The Republicans will grow or lose their Senate majority based on the overall success of their presidential nominee.

Given that reality, why wouldn’t the GOP open on a hard line against a president who would love to tip the court to liberal control? Not only does Obama want to change the court, but his legacy projects are mostly tied up in litigation. He’s doubly motivated to get it done. Obama is the one with the need, while Republicans can abide the status quo.

In the days before permanent, ear-splitting umbrage taking, we might have even called this the start of a negotiation…

DUBYA COMES CLOSE TO CALLING OUT TRUMP
Tampa Bay Times: “George W. Bush never mentioned Donald Trump. But with his folky touch, the former president unleashed a tough takedown Monday of the billionaire businessman who has upended a Republican Party his family has long led. ‘I understand Americans are angry and frustrated,’ Bush said during his first campaign rally for his brother, Jeb Bush. ‘But we do not need somebody in the Oval Office who mirrors and inflames our anger and frustration.’ Trump’s rise has confounded the Bush family and its allies. But despite months of predicting the brash billionaire would fade, it’s Jeb Bush whose White House hopes are in peril, particularly if he’s unable to pull out a strong showing in Saturday’s South Carolina primary. The former president emerged from his self-imposed political hibernation to try to give Bush a boost. He layered each validation of his younger brother with an implicit critique of Trump.”

Trump threatens lawsuit, third-party run over Cruz feud - In a campaign press release, Donald Trump warned that if Ted Cruz is going to “continue to lie with such desperation” Trump would have to fight back saying, “One of the ways I can fight back is to bring a lawsuit against him relative to the fact that he was born in Canada and therefore cannot be President. If he doesn’t take down his false ads and retract his lies, I will do so immediately. Additionally, the RNC should intervene and if they don’t they are in default of their pledge to me.”

[A new Cruz ad in South Carolina knocks Trump over his stance on abortion and past support of Hillary Clinton.]

“You know, so many people have developed their impression of me from the media or the lack of media. And once they get a chance to actually hear what I have to say, they change their minds.” -- Ben Carson on “The Kelly File” Watch here.

SOUND OFF: READERS REACT TO GOP POWER INDEX
“Donald Trump is an ego maniac who was always going to run 3rd party if he did not win the nomination.  In his mind, he can’t lose, unless someone allegedly treats him unfairly. A sore loser, he throws insults at anyone who dares to question him.” -- Mike Zerressen

“I can’t believe Bush bringing his mother and brother to help him fight his battle against Trump he acts like a spoiled kid and pouting to get his own way.” -- Loraine Boyce

WHAT A BUNCH OF TOOLS
UPI: “An unlucky-in-love Michigan man said he was shocked but amused when coworkers secretly created a rather large personal ad for him -- on a billboard. Matt Hill, 25, of Fife Lake, said his coworkers at Lark Lawn & Garden had him pose for a photo he thought was destined for the company’s website, but he was instead shocked to find the picture and his phone number were plastered Feb. 9 on a billboard along M-37, south of Traverse City. ‘Looking for a Valentine? Call, text or email Matt,’ the billboard reads…Hill said he has received dozens of calls, texts and other messages from people who have seen the billboard and some of them seemed to have genuine interest in a date.”

AND NOW A WORD FROM CHARLES…
“I think this is the moment of his life for Mitch McConnell.  He’s the ultimate Senate tactician.  He knows the rules…In the end the Republicans have to be absolutely united on the fact that they will not accept an Obama [Supreme Court] nominee one way or the other.” -- Charles Krauthammer on “Special Report with Bret Baier.”