President Trump’s Supreme Court nominee Judge Brett Kavanaugh sat before the Senate Judiciary Committee. The confirmation hearing was derailed just seconds into the meeting. Here’s a look at some of the fiery exchanges.

Judge Brett Kavanaugh on Tuesday vowed to be “a neutral and impartial arbiter” if confirmed to the Supreme Court, after a chaotic first day of hearings on Capitol Hill amid political theatrics and protests from Democrats.

“If confirmed to the Supreme Court, I will keep an open mind in every case,” Kavanaugh said. “I will do equal right to the poor and to the rich. I will always strive to preserve the Constitution of the United States and the American rule of law.”

Kavanaugh's confirmation hearings started Tuesday and are set to continue through the week.

Before he spoke, Kavanaugh was introduced by former Secretary of State Condoleezza Rice, Ohio Republican Sen. Rob Portman and attorney Lisa Blatt – a liberal Democrat who said she voted for Hillary Clinton for president but supports Kavanaugh’s nomination.

Democrats, in their opening remarks Tuesday, sounded the alarm about Kavanaugh’s past work in Republican politics, including as a lawyer in George W. Bush’s White House.

But Kavanaugh said Tuesday, “I don’t decide cases based on personal or policy preferences.”

Earlier Tuesday, protests from Democratic lawmakers and demonstrators delayed the formal start of proceedings by more than an hour. Within moments of Tuesday's confirmation hearing kickoff, top Democrats tried to sideline the session with a rapid-fire string of objections concerning access to the nominee's records.

The spectacle underscored the political nature of the confirmation hearings, coming two months before the midterms and as some senators gear up for a possible 2020 presidential run against President Trump. Several of those senators led the charge Tuesday in objecting to Kavanaugh.

Grassley told her she was "out of order," but other Democrats chimed in to back up Harris, including Sen. Richard Blumenthal, D-Conn., who moved to adjourn. 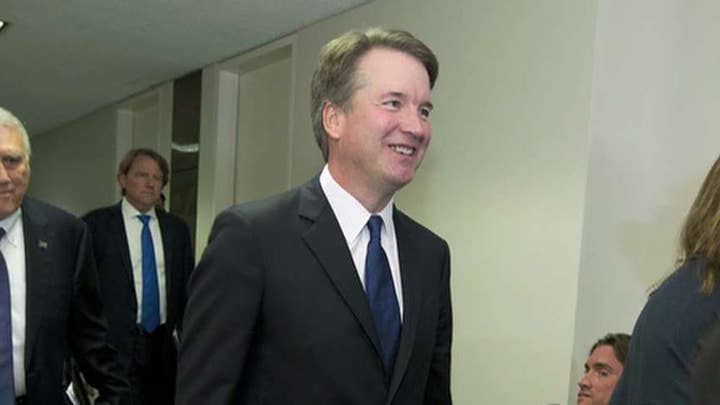 This prompted applause from some in the audience, and touched off protests and shouting. Then, after New Jersey Sen. Cory Booker added his voice complaining of a "rush," Grassley countered: “I think you are taking advantage of my decency and my integrity.”

The chaos led Republican Sen. John Cornyn to remark, "This is the first confirmation hearing subject to mob rule." The Texas senator suggested Democrats would be “held in contempt of court” if they behaved that way in a court of law.

More than an hour and 15 minutes after the hearing began, Grassley moved past Democratic attempts to delay and finally delivered his opening statement, over the sustained shouts of protesters who were being escorted out of the room.

The disruptions continued as lawmakers attempted to make opening statements. There were 63 interruptions before the break for lunch.

“I think we ought to have this loudmouth removed," a frustrated Hatch said. "We shouldn't have to put up with this kind of stuff."

Grassley acknowledged it was one of the most unruly openings of any Supreme Court hearing, saying "this is something I've never gone through before in 15 Supreme Court nominations."

The Capitol Police said they arrested 70 people on Tuesday.

“What we've heard is the noise of democracy,” Durbin said. “This is what happens in a free country when people can stand up and speak and not be jailed, imprisoned, tortured or killed because of it.”

Kavanaugh has left one of the longest paper trails of any recent Supreme Court nominee, having served for more than a decade on the D.C. Circuit Court of Appeals and, before that, for five years as a lawyer in the White House Counsel's office in the George W. Bush administration.

Kavanaugh also worked for independent counsel Ken Starr for three years during the probe that led to the impeachment of former President Bill Clinton.

Booker, another possible 2020 Democratic presidential candidate, acknowledged he already decided to vote against Kavanaugh’s confirmation. But he pleaded to delay the vote until more documents are released.

“We should not vote now,” Booker said. “We should wait. And if we're not waiting, we should object to your nomination.”

Democrats have seen thousands of those documents, but say they want time to review and seek more.

“If you will trust the American people, they will trust you," Durbin told Kavanaugh. "But if your effort today continues to conceal and hide documents, it raises a suspicion.”

Democrats have specifically raised objections over how the Senate received 42,000 pages of Kavanaugh documents the night before the confirmation hearing began. 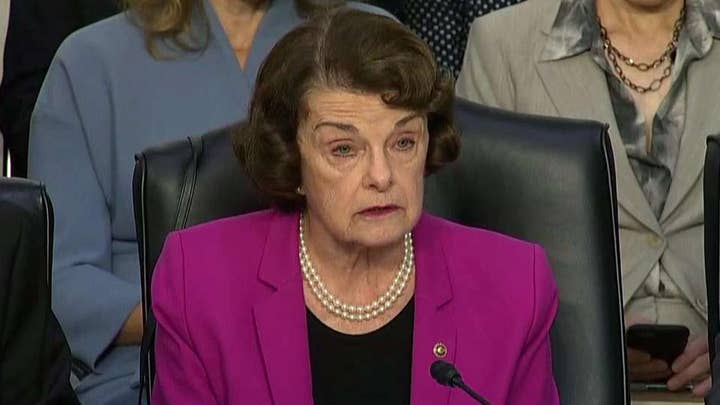 “This is the most incomplete, most partisan, least transparent vetting for any Supreme Court nominee I have ever seen,” Vermont Democratic Sen. Patrick Leahy said.

Grassley, in a written statement submitted for the record, on Tuesday accused Democrats of trying to “bury this committee in millions of pages of irrelevant paperwork.” He called out California Democratic Sen. Dianne Feinstein, the committee’s ranking member, for wanting to search the emails of every Bush White House aide for Kavanaugh documents.

“This would have taken months and months to complete,” Grassley said. “As I have repeatedly stated, I am not going to put the American taxpayers on the hook for the Democratic leaders’ fishing expedition.”

As the hearing kicked off, Democrats zeroed in on the controversy over the production of documents from Kavanaugh’s past work. But as the hearing went on, the Democrats began emphasizing their concern over how Kavanaugh would rule on cases involving abortion and guns.

“You are being nominated for a pivotal seat," Feinstein said. "It would likely be the deciding vote on fundamental issues.”

Rhode Island Democratic Sen. Sheldon Whitehouse told Kavanaugh the NRA “has poured millions into your confirmation,” saying they “clearly have big expectations on how you will vote on guns.” He also expressed fear that Kavanaugh would rule to overturn the Roe v. Wade ruling regarding abortion.

“Despite confirmation etiquette, your own words make clear you don't really believe Roe vs. Wade is settled law, since the court, as you said, can always overrule its precedent,” Whitehouse said.

Republicans, though, argued Kavanaugh is highly qualified, saying Democrats aren’t making a case that he doesn’t have the experience to sit on the high court.

“If it's not about his judicial record, what is this fight about?” Texas Sen. Ted Cruz said. “I believe this fight is nothing more and nothing less than an attempt by our Democratic colleagues to relitigate the 2016 presidential election.”

Harris, the California Democratic senator, took issue with Kavanaugh’s past work, saying has a history of carrying out “deeply conservative partisan agendas.”

“If we look at his record on the D.C. Circuit, and in his recent writings and statements, it is clear that the nominee has brought his political bias to the bench,” Harris said.

But Republicans argued some records sought by Democrats, from Kavanaugh’s time in the White House, are irrelevant to how he'd serve as a justice.

“The question before us today is not what does Brett Kavanaugh think 11 years ago on a policy matter,” Nebraska Republican Sen. Ben Sasse said. “The question is whether or not he has the temperament and character to take his policy views and political preferences and put them in a box marked irrelevant and set it aside every morning when he puts on the black robe.”

Kavanaugh's elevation from the D.C. Circuit Court of Appeals to replace retired Justice Anthony Kennedy would mark a generational rightward shift on the Supreme Court, raising the stakes beyond those of last year's nomination of Neil Gorsuch.

The judge's nomination, though, will ultimately succeed or fail depending on a handful of swing-vote senators, including vulnerable red-state Democrats and moderate pro-choice Republicans who have all said that they would withhold judgment on the nominee.

Republicans command a narrow 50-49 Senate majority, which would return to 51-49 once a Republican successor to the late Sen. John McCain is seated. While the hearing was ongoing, former Sen. Jon Kyl was named to that seat.

Republicans have little margin for error, though Vice President Pence can break a tie.

Republicans have said they hope to have Kavanaugh confirmed by a floor vote by early October, when the next Supreme Court term begins.