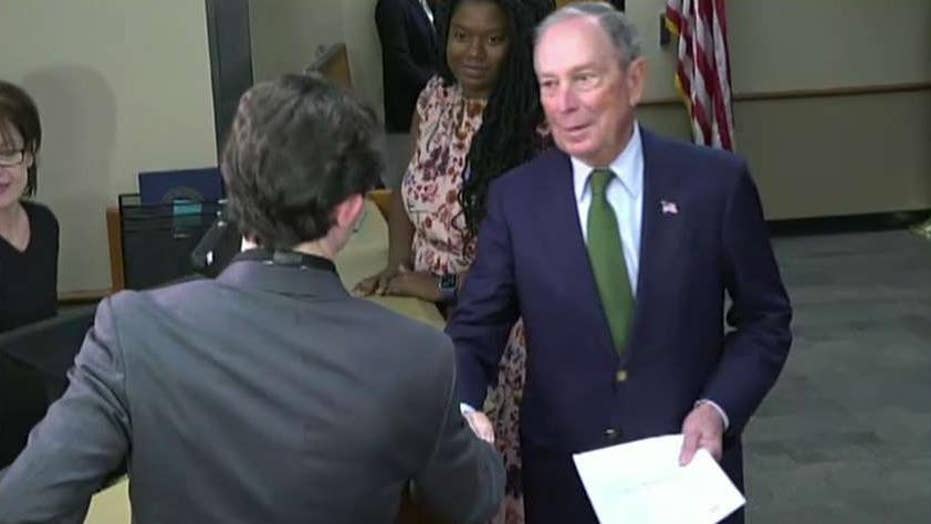 Michael Bloomberg files to get on Arizona primary ballot

For Mike Bloomberg, the incoming fire from many of his 2020 Democratic presidential nomination rivals has been coming fast and furious.

SANDERS: 'I DON'T THINK BILLIONAIRES SHOULD BE ABLE TO BUY ELECTIONS

The progressive Democratic senator from Massachusetts spoke one day after the former three-term New York City mayor and multibillionaire business and media mogul declared his candidacy for president and immediately went up with TV commercials in media markets from coast to coast backed by a massive more than $30 million ad buy.

While Warren was taking aim at Bloomberg in Iowa, populist Sen. Bernie Sanders of Vermont told Fox News in New Hampshire that “I don’t think that’s what American democracy is supposed to be about. I don’t think billionaires should be able to buy elections.”

Other than their vocal opposition to President Trump, the large field of Democratic White House hopefuls are at times at odds with each other. But Bloomberg’s entry into the nomination race appears to be unifying his rivals in opposition to his campaign.

Bloomberg has vowed to spend at least $150 million of his own money on his bid and skip the early primary and caucus voting states of Iowa, New Hampshire, Nevada and South Carolina and instead concentrate on the delegate-rich states that hold contests on Super Tuesday and beyond.

Sanders and Warren – the progressive standard-bearers in the 2020 field – were far from the only candidates taking aim at Bloomberg.

“I just don’t think you should be able to have billionaires with an unfair advantage in this election,” Sen. Amy Klobuchar of Minnesota told voters at town hall in New Hampshire on Friday.

And Sen. Cory Booker told Fox News on Friday that the eye-popping Bloomberg ad buy was “frustrating.” The New Jersey senator, like nearly the entire field of Democratic contenders, is vowing to rid big bucks from campaign politics.

“When I was a mayor, Mike was one of those mentor mayors to me. But when it comes to presidential politics, your qualifier should not be money. It should not put you at an advantage over other candidates who might have incredible service and accomplishments and the like,” said Booker, who served as mayor of Newark, N.J., before being elected to the Senate.

The push back against Bloomberg is similar – but magnified -- to the criticisms of billionaire environmental and progressive advocate Tom Steyer, who’s spent over $50 million in media to promote his campaign since jumping into the race in July. With a vastly larger bank account than Steyer, Bloomberg’s more of a threat to the field of contenders.

While most of the top and middle tier contenders have taken aim at Bloomberg, two have remained mostly silent. The two are former Vice President Joe Biden and South Bend, Ind., Mayor Pete Buttigieg – who may potentially have the most to lose with another center-left contender in the race.

Hours after Bloomberg’s announcement, Biden merely said following a fundraising event in Rhode Island that, “I welcome him into the race.”

And Buttigieg on Monday said he’s “always glad to see another mayor running for national office.”

While Buttigieg and Biden have held back on criticizing Bloomberg, they are simpatico with Warren and Sanders and others contenders when it comes to radically changing the current campaign finance system to rid big money out of politics.

Veteran Democratic operative and strategist Julia Barnes noted that “Bloomberg is coming into an environment where voters are not interested in granting him access through money.”

“The blowback he is getting for this late entry reflects the attitude cultivated in early states - that effort, time and personal engagement is key for support. That may be different in the states he is aiming to play in for March and later but I seriously doubt it. At this point, he has been so absent from the voter’s conversations that I don’t expect TV to change that,” predicted Barnes, a top campaign aide on Sanders 2016 White House bid.

“Bloomberg’s candidacy can be sliced and diced by the media and punditry but I think what his campaign means to this race is pretty simple: Bloomberg gives Democratic candidates the ability to shift media and voter scrutiny from them to him. There is a strategic value in using Bloomberg as a backdrop to corporate greed and meritocracy gone wrong,” explained Ceraso, a veteran of Sanders’ 2016 campaign who served as Buttigieg’s New Hampshire state director this year before parting ways with the campaign.

But he warned that “the problem behind this campaign strategy is that it prevents substantive debate around core policy differences between the top tier candidates and that’s not good for the party that needs to both rebuild the Obama coalition and restore trust with disengaged voters who are looking for a reason to vote.”