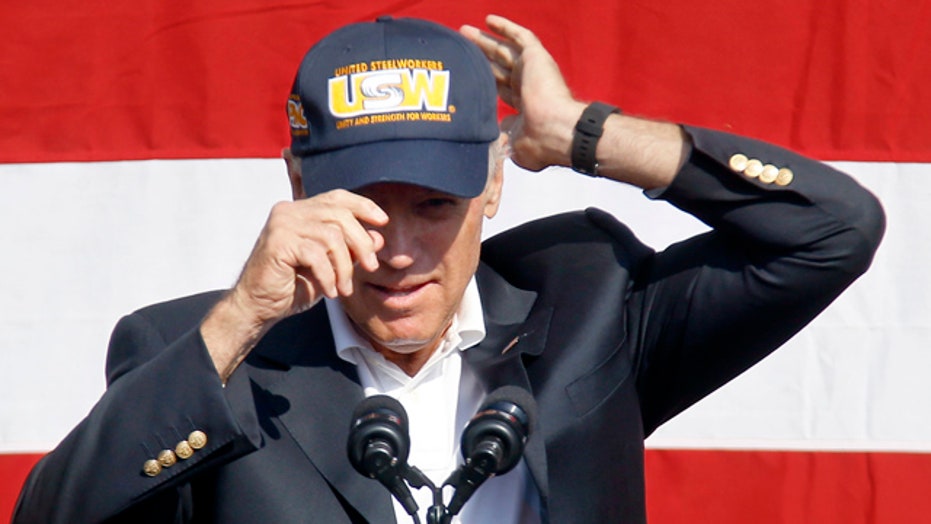 Vice President Biden, who is contemplating a 2016 presidential bid, on Monday kicked off a Labor Day parade in Pittsburgh with a fiery, pro-worker speech that concluded with hundreds of union employees and others chanting “run, Joe, run.”

"I am hot. I am mad. I am angry," roared Biden after telling the crowd that too few Americans are benefiting from continually increasing U.S. productivity.

“Productivity went up 73 percent, but wages only went up 9 percent. … Something is wrong folks,” Biden said before the parade, on a stage he shared with AFL-CIO President Richard Trumka. “CEOs now make 400-times as much as the average worker.”

Trumka and his powerful union hold a key endorsement for Democrats in the presidential race, which comes with member votes and the ability to organize and rally other American voters to the polls.

He told reporters last week that Biden is “a good friend and a great champion for working people” and criticized Democratic presidential front-runner Hillary Clinton for failing to “energize workers.”

Trumka also expressed disappointment that Clinton has yet to take a position on the Trans-Pacific Partnership, President Obama's proposed international trade deal that the AFL-CIO does not support.

However, he also said the Democratic primary race remains “wide open” and that people should not over-analyze him and Biden appearing on stage together.

“We are the American labor movement,” Trumka said Monday, “the most powerful movement on the face of the Earth.”

The 72-year-old Biden trotted onto the stage and along the parade route but deflected questions about whether he will challenge Clinton and surging Vermont Sen. Bernie Sanders.

"I am definitely going to run part of this parade,” he said.

Biden -- who was born in Pennsylvania and served 37 years as a Delaware senator before becoming vice president -- on Monday also made clear that his storied Washington political career started with a key labor endorsement that first got him to Capitol Hill.

"The only reason I’m standing here is back in '72 when I was 29-year-old kid … I couldn’t get help anywhere,” he said. “But I won, I won because of the steelworkers. We have an expression where I grew up, 'You go home with them that brung you to the dance.' "

The notion of a third Biden presidential run has caught fire in recent weeks amid concern about Clinton’s declining polls numbers and Biden meeting earlier this summer with Trumka and Sen. Elizabeth Warren, D-Mass., whose pro-worker, anti-Wall Street message has connected with Americans.

“We built this,” said Biden on Monday, echoing a populist phrase used by Obama in his successful 2012 re-election bid and often traced back to Warren.

His speech also reflected on such populist, blue-collar themes as making the U.S. tax code more fair and eliminating tax breaks for the country’s highest wage-earners.

Biden has since May been grieving the loss of his 46-year-old son, Beau Biden, who died of brain cancer.

“The most relevant factor in my decision is whether my family and I will have the emotional energy to run,” he said Thursday.