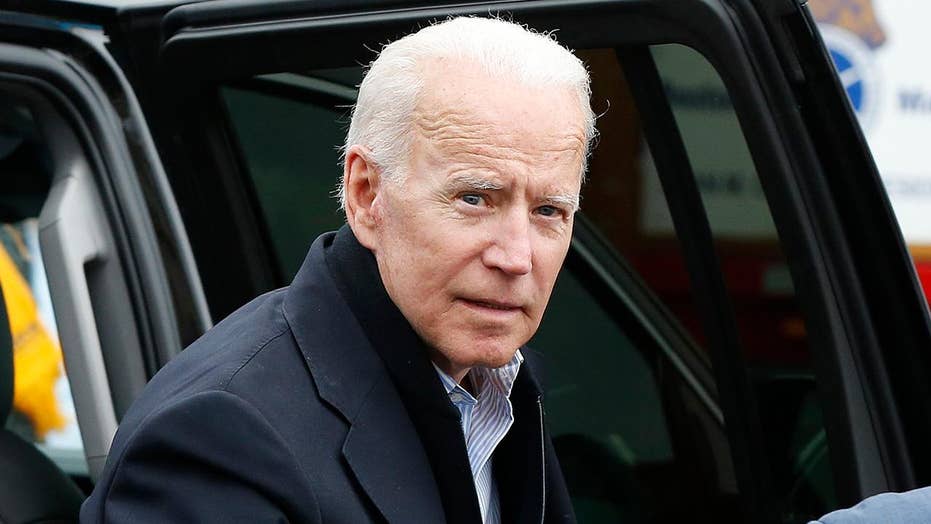 Biden launches presidential bid by targeting Trump, claims 'we are in a battle for the soul of this nation.' Bryan Llenas reports.

Joe Biden’s presidential campaign announced Friday it has raised $6.3 million in the 24 hours following the former vice president’s declaration early Thursday that he was running for the White House.

The campaign cash haul is slightly larger than the $5.9 million Sen. Bernie Sanders brought in during his first day as a 2020 candidate in February, and the $6.1 million former Rep. Beto O’Rourke of Texas hauled in during his first 24 hours as a White House contender in March.

SANDERS, WARREN, TARGET BIDEN AFTER HIS ENTRY INTO RACE

Biden’s campaign touted - in a fundraising email to supporters - that 97 percent of online donations were under $200 and that the average online donation was $41. The campaign also pointed out that contributions came in from all 50 states.

The campaign also revealed that 96,926 people “chipped in” on day one.

The Sanders campaign highlighted in February that 223,047 individuals made contributions during the Vermont independent’s first day as a Democratic presidential candidate, with the average donation around $27 per person.

Before Sanders, the record for a first day haul among the 2020 Democratic contenders belonged to Sen. Kamala Harris of California, who brought in more than $1.5 million during her first 24 hours as a candidate in January.

Fundraising is considered an important barometer of a candidate's popularity and a campaign's strength. Campaign cash can be used by a candidate to build an organization and hire staff, increase voter outreach efforts, travel and fund ads.

Biden spent the first night of his third bid for the White House at a fundraiser at the suburban Philadelphia home of David Cohen, a senior executive of the Comcast Corp. and a former Democratic operative.