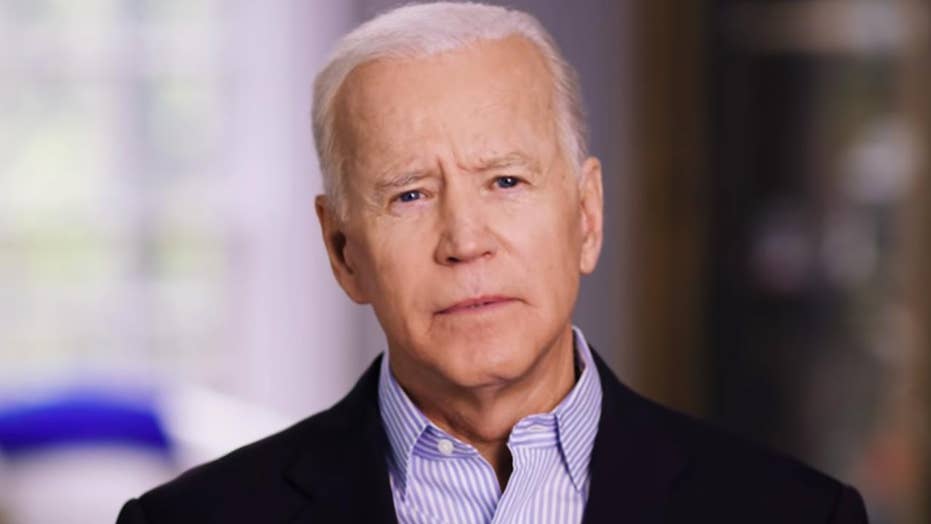 Joe Biden launches his 2020 presidential campaign by criticizing the president; Peter Doocy has the details from Wilmington, Delaware.

Former Vice President Joe Biden, in an online video Thursday, officially declared his candidacy for president in 2020, capping off weeks of intrigue and media speculation.

He enters a crowded field of Democratic contenders aiming to unseat President Trump -- nearly 32 years after he announced his first campaign for president. The campaign is Biden’s third for the White House, having also unsuccessfully run in 1988 and 2008.

"The core values of this nation, our standing in the world, our very democracy, everything that has made America -- America -- is at stake. That’s why today I’m announcing my candidacy for president of the United States," Biden tweeted early Thursday.

With the announcement, which followed months of deliberations, Biden becomes a front-runner in an incredibly crowded field of Democratic presidential contenders all vying to face off next year against Trump.

The president welcomed Biden into the race, warning him that the race will be "nasty."

Biden, along with independent Sen. Bernie Sanders of Vermont -- who is making his second straight White House run -- have consistently topped the polls in the race for the Democratic nomination.

In Thursday's video, the former vice president pointed to the violent clashes in Charlottesville, Virginia in August of 2017 at a large white nationalist rally, Biden took aim at Trump’s response that “there were some very fine people on both sides.”

Biden argued that "if we give Donald Trump eight years in the White House, he will forever and fundamentally alter the character of this nation, who we are, and I cannot stand by and watch that happen."

Fox News reported last week that the theme of the announcement would be ‘the battle for the soul of America.’

Biden is expected to follow up the announcement with his first high-dollar fundraiser in the Philadelphia home of Comcast executive David Cohen Thursday evening and appear at a local union hall in Pittsburgh on Monday.

The former Delaware senator has for weeks been rallying potential donors in an effort to gain momentum, noting that Sanders and former Rep. Beto O'Rourke of Texas managed to raise $6 million within 24 hours of launching their candidacy.

The Biden campaign said that the former vice president will lay out his “vision for rebuilding America’s middle class” at the Pittsburgh event. Then he’s scheduled to travel to the four states that vote first in the primary and caucus nominating calendar. They add that Biden will hold a rally in Philadelphia on May 18, likely at the city’s Museum of Art – known nationally for the scene of the fictional Rocky Balboa’s training on the museum’s steps in the movie "Rocky.”

The start and finish of his initial campaign swing in Pennsylvania is no surprise. The state – long a crucial battleground in presidential elections – was one of the key states Trump flipped in the 2016 election to help him capture the White House.

And while Biden has long lived in Delaware and represented that state for nearly four decades in the Senate, he was born and spent his early years in Scranton, Pennsylvania and the Keystone State has always remained special to him.

Moments after his announcement, Biden was endorsed by Sen. Bob Casey of Pennsylvania.

Biden’s long awaited and much anticipated presidential campaign launch comes after facing allegations in recent weeks from women that he had made them feel uncomfortable in the past with what was described as inappropriate touching. It instantly become a top story online and on the cable news networks, forcing the former vice president to play defense in the #MeToo era and defend his decades old brand of close up and personal politics

"Social norms are changing. I understand that, and I've heard what these women are saying," Biden explained in a video released during the height of the furor, which threatened his looming candidacy. "Politics to me has always been about making connections, but I will be more mindful about respecting personal space in the future. That's my responsibility and I will meet it."

And referring to well-publicized past episodes of getting too close for comfort with fellow politicians, their family members and others, the former vice president explained that "it is incumbent on me and everybody else to make sure that if you embrace someone, if you touch someone, it’s with their consent, regardless of your intentions."

While the controversy was dominating headlines, Biden’s inner circle was continuing to reach out to Democratic operatives as they quietly mapped out a national campaign structure as well as staff in the early voting primary and caucus states. And in the days leading up to the launch, Biden picked up the pace on reaching out to top donors and supporters, with the acknowledgment that he’ll be judged by how much he fundraising dollars he hauls in in the first 24 hours after declaring his candidacy.

Biden has long had his eyes on his presidency: In June of 1987, Biden first launched a bid for the 1988 Democratic nomination.The then-senator from Delaware was considered one of the stronger candidates in the emerging Democratic field. But three months into his campaign, he faced newspaper headlines that he had plagiarized a speech by British politician Neil Kinnock. The incident sparked a controversy, knocking Biden out of the race well before the start of the primaries and caucuses.

Biden ran a second time for the Democratic nomination in the 2008 cycle, declaring his candidacy in January of 2007. Despite his long record, his campaign never caught lightning in a bottle.

There were also some well-publicized gaffes, including his description of then-Sen. Barack Obama.

"I mean, you got the first mainstream African-American who is articulate and bright and clean and a nice-looking guy," Biden said at the time. "I mean, that's a storybook, man.” The comments quickly spelled trouble for Biden, forcing him to apologize.

Biden’s bid was also overshadowed by Obama and then-Sen. Hillary Clinton of New York, who ended up battling each other in an historic and marathon quest for the nomination. Biden dropped out of the race after coming in fifth in the Iowa caucus, grabbing less than one percent of the vote.

But seven months later, Obama selected Biden as his running mate. The pair won the November 2008 election, and were re-elected in 2012.

Biden seriously considered another run for the White House in 2016, but grappling with the death of his eldest son Beau, the Vice President announced in October of 2015 that he would not launch a campaign.

Speaking from the podium at the Rose Garden, Biden explained that he had been emotionally drained by the death of his son and stressed that "nobody has a right ... to seek that office unless they're willing to give it 110 percent of who they are.”

But the decision not to run haunted him. He noted in early 2016 that he regretted not running “every day.”

Trump’s upset victory over Clinton in the 2016 presidential election changed the dynamic for Biden. He soon became a vocal critic of the Republican in the White House, and speculation sprang up that Biden would consider a final presidential bid in 2020. Trips to New Hampshire in 2017 and to Iowa, South Carolina and Iowa in 2018 fueled the flames.

Biden dropped a major hint of his pending 2020 campaign in early March. After walking to the podium at the at the annual convention of the International Association of Fire Fighters (IAFF) to chants of “run Joe, run,” by the union crowd, Biden said “I appreciate the energy you showed when I got up here. Save it a little longer. I may need it in a few weeks.”

The comments brought a standing ovation from the mostly blue collar audience that Biden feels he can count on as he runs for president.

In early April, Biden told reporters "I am very close to making a decision to stand before you all relatively soon." Asked why the hold-up, Biden quickly answered, "The hold-up is to put everything together."

At the time, Biden also pushed back against the perception that he's a moderate in a party that's increasingly moving to the left. He defended himself, saying he'll stack his record against "anybody who has run or who is running now or who will run."

And highlighting his early public push for same-sex marriage during the Obama administration, he stressed "I'm not sure when everybody else came out and said they're for gay marriage."

Biden was born on November 20, 1942, and lived in Scranton, Pennsylvania for ten years until moving with his family to Delaware. He became an attorney in 1969 and was elected to the New Castle City Council in 1970. He won what was out the outset a long-shot election to the Senate two years later, becoming the sixth-youngest senator in the nation’s history. He was re-elected six times before resigning in 2009 to take on the duties as vice president.

During his nearly four decades in the Senate, he was a longtime member and former chair of the Foreign Relations Committee. He also served as chairman of the Senate Judiciary Committee.

But Biden’s role as Judiciary Committee chairman in 1991 during the confirmation hearings of Supreme Court nominee Clarence Thomas is arguably more controversial today than it was at the time nearly three decades ago.

In March he lamented the impact of "white man's culture" and bemoaned his own role in the hearings that undermined witness Anita Hill's credibility. Biden said that Hill, who is black, should not have been forced to face a panel of "a bunch of white guys" about her sexual harassment allegations against Thomas, who was nominated by President George H.W. Bush.

"To this day I regret I couldn't come up with a way to give her the kind of hearing she deserved," he said. "I wish I could have done something."

But his comments elicited derision by many women, who argued that as the chairman of the committee, he had the power to do something.

Biden married his wife Neilia in 1966. In 1972, soon after his election to the Senate, his wife and their daughter Naomi were killed in an automobile accident. Sons Beau and Hunter Biden survived. He married his second and current wife Jill five years later.