The White House on Friday said it is "committed" to working with Congress on new legislation to repeal current presidential war powers to be replaced with a "narrow and specific framework" to protect U.S. national security, while "ending the forever wars."

The commitment comes after a bipartisan group of senators, led by Sens. Tim Kaine, D-Va., and Todd Young, R-Ind., on Wednesday called for the repeal of presidential war powers granted by Congress in 1991 and 2002, which would revoke authorization for military force in the Middle East, as tensions rise between the U.S. and Iran.

"Tim Kaine has been a leader on questions of war powers throughout his time in the Senate and has helped build a strong bipartisan coalition that understands the importance of Congress’s constitutional prerogatives," White House press secretary Jen Psaki tweeted Friday.

"We are committed to working with Congress to ensure that the authorizations for the use of military force currently on the books are replaced with a narrow and specific framework that will ensure we can protect Americans from terrorist threats while ending the forever wars," Psaki said.

The legislation was introduced after some lawmakers were frustrated by President Biden’s unilateral call for an airstrike in Syria last week, against Iran-backed militant forces that had launched attacks on U.S. targets in Iraq, and after a military base housing U.S.-led coalition troops was targeted in Iraq.

"Last week’s airstrikes in Syria show that the Executive Branch, regardless of party, will continue to stretch its war powers," Kaine said in a statement Wednesday. "Congress has a responsibility to not only vote to authorize new military action, but to repeal old authorizations that are no longer necessary." 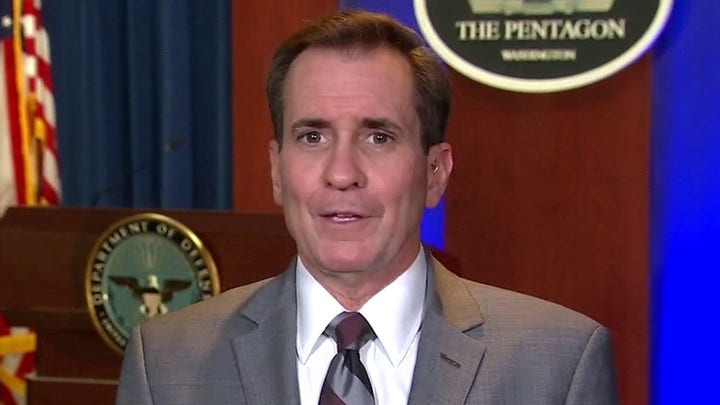 Democrats and Republicans have called for an end to the U.S.’ "forever wars" and seek to revoke the president’s ability to continue military force in Iraq -- though it would not necessarily limit Biden’s ability to use military action in other Middle Eastern nations.

The House and Senate passed a similar measure by Kaine last year that aimed to limit then-President Donald Trumps’ authority in launching military operations against Iran, but the legislation was vetoed.

JOHN KIRBY: SYRIA STRIKE WAS ABOUT PROTECTING US TROOPS IN IRAQ

"Congress has been operating on autopilot when it comes to our essential duties to authorize the use of military force," Young said. "The fact that authorities for both of these wars are still law today is illustrative of the bipartisan failure of Congress to perform its constitutionally-mandated oversight role."

A Pentagon spokesperson had called the attack "troubling" and stuck by the Biden administration’s decision to launch "defensive" attacks last week.

"The President, as commander in chief has a fundamental responsibility to act in defense self-defense of our troops and our assets overseas, nothing’s going to change about that," Pentagon spokesman John Kirby had said.