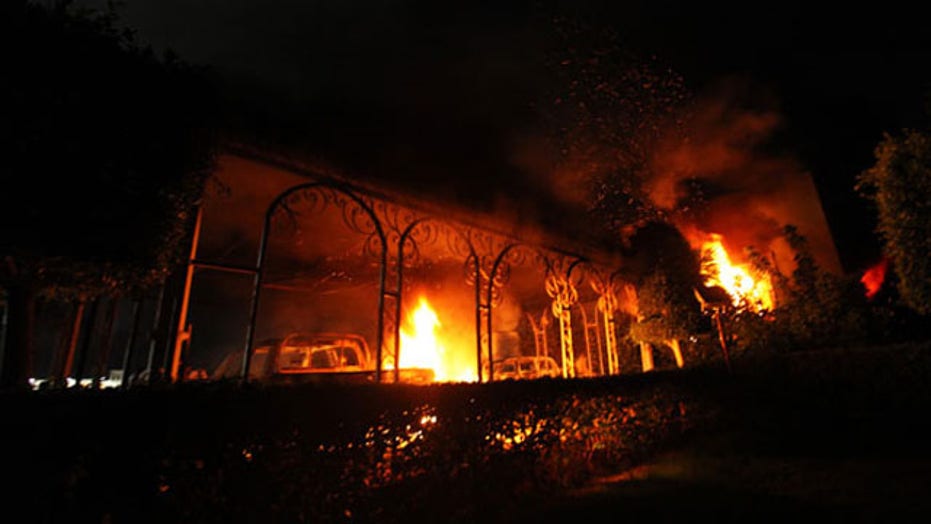 The Libyan militant suspected in the deadly attack on Americans in Benghazi hid in plain sight in the African nation prior to his capture by U.S. forces on Sunday — granting multiple media interviews to news outlets including Fox News.

Ahmed Abu Khattala, a senior leader of the terror group Ansar al-Sharia in Libya, brazenly gave several interviews with reporters despite being one of the suspected ringleaders in the September 2012 attack, during which Ambassador Christopher Stevens and three other Americans died.

State and Defense officials were asked repeatedly Tuesday why reporters were able to access Khattala while U.S. forces apparently were not, until they captured him on Sunday.

"What matters is that ... we got him," a Pentagon spokesman said.

One month after the attack, Khattala told Fox News' Greg Palkot that he was at the scene of the attack, but denied planning it. He claimed to be directing traffic and protecting fellow militia members guarding the complex.

Khattala also warned one newspaper that his capture could backfire for the U.S.

“God knows what would happen in Libya if I was taken away,” Khattala, then 42, told The Times (London) in October. “This act would win the Americans more enemies, and they would fall.”

Khattala spoke with reporter Anthony Loyd in the front room of his home just a 10-minute drive from central Benghazi at the time. He was described as 6 feet 2 inches tall, with a gray beard and a thin scar on the left side of his face. And despite his “wanted” status at the time, Khattala took little-to-no precautions before the interview, during which he admitted to being near the consulate building when it was attacked but consistently denied being part of the assault.

“I received a call to say that demonstrators had moved to the building,” he told the newspaper. “So I went there with other rebel leaders, as we always did if there was word of clashes. After things calmed down I went to the consulate, intelligence building, whatever you call it. I briefly went into a building on the left hand side that was unburned, then I left. That was it.”

On Oct. 18, 2012, the New York Times published an interview from “two leisurely hours” with Khattala, who declared he was not a member of Al Qaeda but said he’d be proud to be associated with the organization’s zeal for Islamic law. He also blamed the terrorist attacks of Sept. 11, 2001, on the United States’ foreign policy.

Khattala — who spoke to the Times at a crowded luxury hotel while reportedly sipping a strawberry frappe on a patio — said at the time that no authority had ever questioned him about the attack, which led to intense criticism of the Obama administration for being unable to apprehend those responsible. He also said he had no plans to go into hiding.

Khattala told the newspaper that the attack had grown out of a peaceful protest against a video made in the United States that mocked the Prophet Muhammad and Islam.

The filmmaker, Nakoula Basseley Nakoula, told FoxNews.com in a series of phone interviews that the "Innocence of Muslims" had been widely misunderstood, and not just in being singled out as causing the Benghazi attack.

Nakoula declined to say whether he felt his film was being used as a scapegoat for the attack or if he was unfairly prosecuted after being charged with probation violation related to his film.

Khattala, for his part, reportedly said guards inside the company — it’s unclear whether they were Libyan or American, he said — had shot first at the demonstrators, provoking the situation. He also claimed — without providing evidence — that the attackers had found weapons, including explosives, into the American compound.

Khattala also said he opposed democracy as contrary to Islamic law and characterized those who support secular constitutions as “apostates.” He also declined to condemn the notion that the demolition of a diplomatic mission and the killing of the first U.S. ambassador since 1979 was an appropriate response to a crude, 14-minute video.

“From a religious point of view, it is hard to say whether it is good or bad,” he told the New York Times.

Khattala was ultimately captured on Sunday, Pentagon officials said. He's now believed to be aboard a U.S. naval vessel en route to the United States, where he will face prosecution. No civilian casualties were related to the operation and all Americans involved have safely departed Libya, officials said.