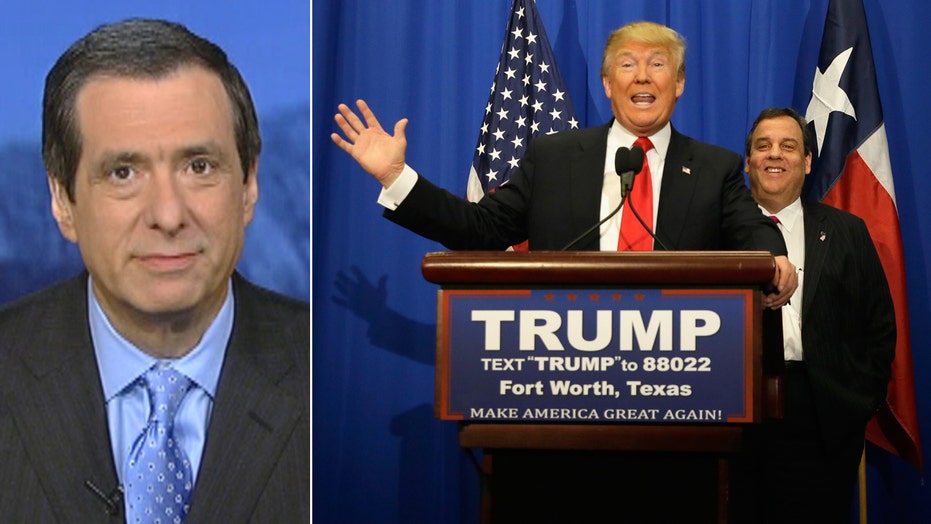 Kurtz: Trump controls the media (and bumps me!)

The Chris Christie endorsement underscored why Donald Trump has been driving his rivals crazy—but not for the reason you may think.

Trump once again exhibited his uncanny ability to control the news cycle and turn the political conversation to his advantage. The campaign had been sitting on the endorsement by the former New Jersey governor for some time and chose to roll it out half a day after a raucous CNN debate in which Trump got scratched up a bit.

We were heading into a weekend in which the toe-to-toe combat with Marco Rubio, and to a lesser extent Ted Cruz, were going to be endlessly rehashed, including a couple of moments when the billionaire seemed off-balance.

Instead, the Houston debate immediately became history as Trump and Christie gave the chattering classes something new and urgent to chatter about. The campaign picked that moment to change the narrative.

It obviously helps that one of Trump’s competitors in the presidential race is now using his bombastic style to help the New York-area pal he’s known for many years. But the media care far more about endorsements than the voters do.

But there’s something much more profound going on here.

As we approach Super Tuesday, the remnants of the Republican establishment--and the conservative media establishment--are engaged in a last-ditch effort to paint Trump as a dangerous demagogue who is a menace to the party and the country.

Showcasing Christie’s backing opens the door for other parts of the establishment to come on board. I’m told the Trump team has a half-dozen other statewide officials whose endorsements are ready to be made public. Maine Gov. Paul LePage has already followed suit.

The stop-Trump movement is sounding a bit desperate. I’ve read one conservative commentator after another a) saying he was wrong to dismiss Trump, and b) spinning strategies for other candidates to change the dynamic by teaming up or dropping out.

What much of the conservative establishment, including its media wing, is trying to do is to paint Trump as beyond the pale, a fringe character who has somehow hijacked the Republican Party. With liberals attacking Trump for more obvious reasons, these conservatives are saying it’s an act of conscience to do everything possible to derail the guy.

But if Christie, who won a landslide reelection in a blue state, is vouching for Trump, how bad can he be? That’s the value of his embrace, along with the fact that Christie has a lot of friends in the media.

At the debate, Rubio proved himself to be a fighter. But he threw so many things at Trump so quickly that no one thing stuck—and the charges and countercharges were drowned out by the yelling as Wolf Blitzer repeatedly let the thing spiral out of control.

Even if Rubio picks up a few points, he is so far behind Trump in tomorrow's Super Tuesday contests that there is no state he expects to win. And if Trump piles up delegates in nearly a dozen states, Rubio does poorly and Cruz just wins his home state of Texas, last week’s debate will fade into history and the media will certify Trump as the all-but-certain nominee.