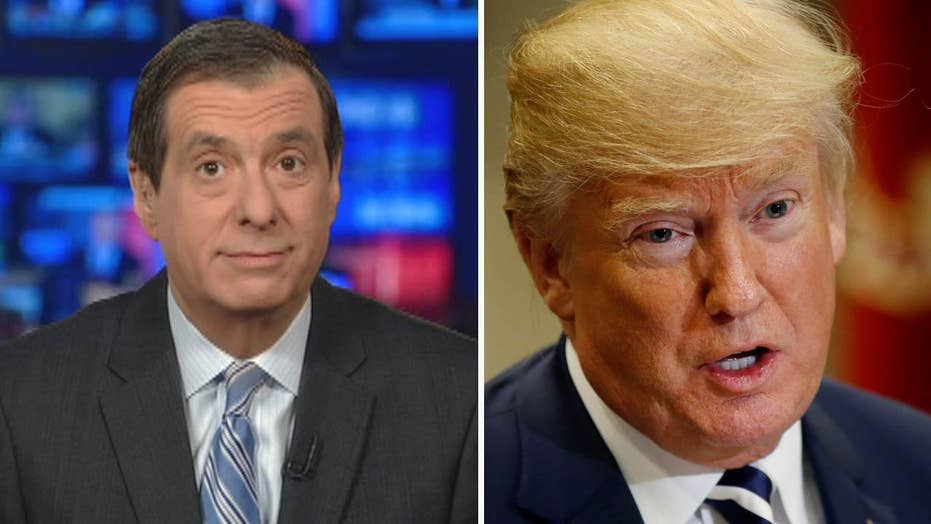 Kurtz: What Are Trump’s high crimes and misdemeanors?

'MediaBuzz' host Howard Kurtz weighs in on the increase in media stories calling for Trump's impeachment despite any evidence to suggest he could or should be impeached.

Even as Robert Mueller has put forth no evidence tying Donald Trump to Russian collusion, are the media, not so subtly, pushing the idea of impeachment?

It certainly seems to be a hot topic, though it remains unclear what the grounds would be, beyond the fact that Democrats think he's doing a lousy job.

Slate even drew up some draft articles of impeachment. Oh wait—that was published last May.

The New York Times Book Review just happened to devote its cover to an assessment of two books on the subject.

The New Yorker just happened to profile "The New York Congressman Who Could Lead an Impeachment Charge Against President Trump." Jerry Nadler is quoted as saying "this president presents the greatest threat to constitutional liberty and the functioning of our government in living memory." (Perhaps he doesn’t remember Richard Nixon.)

Nate Silver’s 538 site just happened to lay out how "The Midterms Could Set Trump On A Path Toward Impeachment."

And after a Democrat won a special House election in Pennsylvania in a heavily pro-Trump district, a banner on Chris Matthews' "Hardball" said: "Impeachment Threat Grows As Democrats Take House Seat." That fast, huh?

This is what's making the I-word a hot topic, the growing media consensus that the Democrats have a very good shot at winning back the House this fall. And the idea of the opposition party taking control of the committees and investigative machinery is, according to this theory, just a short distance from trying to boot Trump from office.

Now the post-2018 calculation could change if Trump were not just to criticize Mueller but actually fire him, which the press portrays as a real possibility but which the White House insists won't happen. Lindsey Graham said yesterday such a firing would "probably" be an impeachable offense if it was done without cause.

Even some Republicans are talking up the prospect, undoubtedly to motivate their voters to stop Nancy Pelosi and company. Wisconsin GOP Rep. Sean Duffy told the Hill, "Of course they're going to impeach Donald Trump. Do you think that MSNBC or CNN would allow for anything less?"

(Steve Bannon, as I revealed in my book, warned Trump that impeachment would definitely happen if Pelosi's party won the House.)

The idea still feels far-fetched to me, since it would announce to the public that the new Democratic majority cares more about ousting the president than pushing a legislative agenda.

Any discussion of impeachment—and the previous examples involving Andrew Johnson, Nixon and Bill Clinton—starts with the recognition that "high crimes and misdemeanors" is whatever a majority of the House says it is. But the founders intended it as a rare constitutional remedy.

In his Times review of two impeachment books, Andrew Sullivan, the conservative writer and former blogger who came to take a positive view of Barack Obama and despises Trump, acknowledges as much.

Sullivan writes: "What about passively cooperating with a foreign power to subvert an American election and then, after clear proof of such interference, refusing to counter that foreign power's intent to disrupt the next election too? If a president unwittingly benefited from a foreign foe’s meddling ('no collusion!'), and he's merely guilty of failing to do enough to counter that power's continuing assault on the American democratic process, he's in the clear. But if he is actively neglecting a defense of this country's electoral integrity because he believes the Kremlin helped him win an election in the past, and will almost certainly help him and his party in the near future, then impeachment is a no-brainer. If he knew of the meddling at the time and encouraged it, ditto ...

"The trouble here is that we have, so far, no proof of anything but a willingness to collude with a foreign power's interference; and no clear evidence at all of the president’s personal involvement with foreign actors."

The British-born journalist concludes that "you can impeach a president, but you can't, alas, impeach the people. They voted for the kind of monarchy the American republic was designed, above all else, to resist."

That is the bottom line, no matter how much Sullivan and others may disapprove of the outcome. Trump won the Electoral College and undoubtedly would have won without Moscow's efforts. The notion of impeachment may be good for clicks and ratings, but for now it's wishful thinking by the anti-Trump crowd.