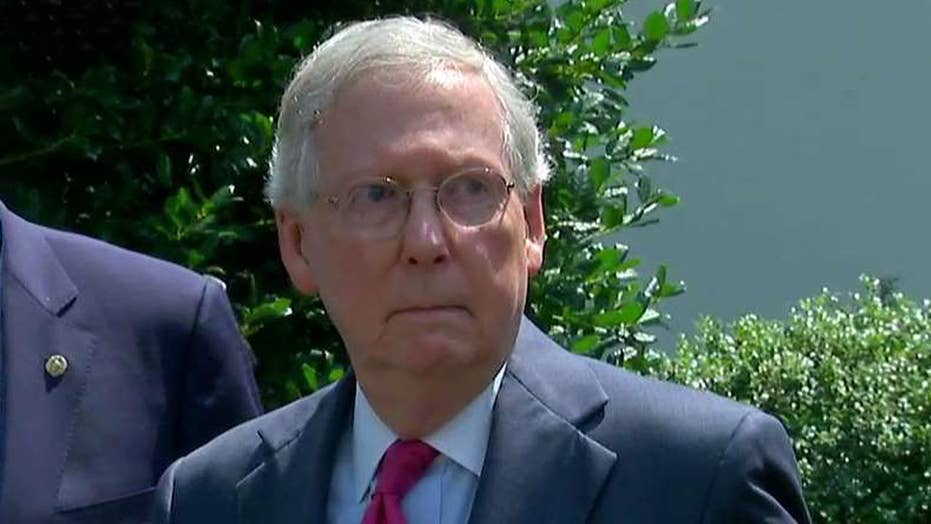 They had precisely 60 senators on their side of the aisle and successfully broke every filibuster Republicans lodged against the health care law.

That is, Democrats had 60 votes, until they unexpectedly lost a seat in a Massachusetts special election in January, 2010. Former Sen. Scott Brown, R-Mass., prevailed over Democratic nominee Martha Coakley.

So with only 59 Democrats, then-Senate Majority Leader Harry Reid, D-Nevada, turned to budget reconciliation and its lower threshold to polish off ObamaCare with a simple majority.

But Republicans can’t even get 51 votes to start debate on a health care bill. Any bill. That’s why Senate Majority Leader Mitch McConnell, R-K.Y., is trying a last-ditch effort to at least start debate “early next week” on the health care bill the House approved in May.

“It’s pretty clear there are not 50 Republicans at the moment for a replacement,” said McConnell shortly after he euthanized the second Senate Republican stab at health care.

So McConnell forges ahead with a vote to summon the bill to the floor. The gig is up if that doesn’t marshal a majority of Republicans.

“We will have demonstrated that Republicans by themselves are not prepared at this particular point to do a replacement,” lamented McConnell.

This was the whole reason the House and Senate worked overtime to set up this entire “budget reconciliation” contrivance. To avoid Democrats from gumming up the works. They didn’t realize they’d have trouble with Republicans.

Math is imperative on Capitol Hill. Republicans hold 52 of the Senate’s 100 seats. Various iterations of the health care package forced anywhere from less than a handful to perhaps as many as 10 Republicans to oppose starting debate on the bill. Republicans could lose only two votes on their side and ask Vice President Pence to break the tie.

But there’s new algebra with Sen. John McCain, R-Ariz., out due to brain cancer. Ninety-nine total senators and only 51 GOPers. The GOP can only lose one senator now and still advance a measure with 50 votes. Forty-nine kills it. That also means there’s no chance for the vice president to break a tie.

“We are really trying to get an agreement,” Sen. John Hoeven, R-N.D., said shortly after he and his colleagues prayed at a late-night health care conclave over McCain’s condition. “But obviously now it is more challenging.”

There remains a chance that McConnell can still cobble together enough votes to initiate the debate on the “motion to proceed.” That’s the key vote. Numerous Republican senators argue they’ll pass something if they can at least kick off the debate.

So this is what McConnell is undertaking: a definitive, final stand to uproot ObamaCare. It’s almost like Winston Churchill’s heralded 1940 speech to Parliament.

Without forcing the issue, McConnell cannot say he didn’t “go on to the end,” as Churchill proclaimed. If the vote fails, then McConnell will have exhausted the process. And nobody could really blame him for then pivoting from the health care issue to tax reform. Or -- gasp -- working with Democrats to “repair” ObamaCare.

House Republicans are turning up the heat on the Senate.

“With all due respect to that body, come on guys,” said an exasperated Rep. Buddy Carter, R-Ga., about the Senate’s inaction on health care. “Someone needs to go over there and say ‘Get it done.’”

“This is very disappointing,” said Rep. Bob Gibbs, R-Ohio. “Over in the Senate, there’s a lot of obstruction. It’s slow moving. The Senate needs to think about a lot of the rules over there.”

Well, the Senate already ran that trap when McConnell established a new precedent and lowered the bar to break filibusters on Supreme Court nominees. That was the only route the chamber could take to confirm Supreme Court Justice Neil Gorsuch. Gorsuch’s confirmation is the only parliamentary achievement about which President Trump can brag.

The use of the budget reconciliation to advance legislation isn’t a “rules change.” But it was the parliamentary ploy Republicans elected to use to use to advance health care and avoid a Democratic filibuster.

So what’s next if the GOP can’t solve the health care riddle with its narrow majority? Lower the bar from 51 to 40?

With a current operational number of 51 now, Republicans just don’t have cushion to lose a few votes. By the same token, it also means McConnell must prevail on only a couple of senators to get the issue on the floor and pass the bill.

Can they do that? Perhaps with a concrete “replacement” bill waiting in the wings. But a bill that simply repeals ObamaCare that grants a two-year window to figure out something else may not fly.

“I think that would be a bad use of our time,” said Sen. Rob Portman, R-Ohio, if there wasn’t a deal on a replacement plan.

It was easy for Republicans to vote to repeal ObamaCare during the Obama administration. President Obama was in the White House. It was artifice. Republicans knew the president wouldn’t sign it. Now they’re firing with live ammo.

Will that be easier?

To approve tax reform, House and Senate Republicans plan to use a special process called “budget reconciliation,” which rebuffs filibusters … .

Er, wait a minute. Isn’t that what the Senate is using to try to pass health care? Well, that hasn’t worked out so hot. The Senate can’t use budget reconciliation as a parliamentary tool unless the House has OK’d a budget.

The House Budget Committee approved one late Wednesday night. But there’s still no path to lug the budget across the floor.

“I can tell you with 100 percent certainty that they don’t have the votes to pass it on the House floor,” North Carolina GOP Rep. Mark Meadows, chairman of the conservative House Freedom Caucus, declared about leaders of the GOP-controlled chamber.

Many Freedom Caucus members are holding out. They want a concrete tax plan first and a package to handle the debt ceiling.

So, if they can’t move tax reform in the Senate …

Maybe Bob Gibbs is onto something.

Drop the bar to 45 to pass bills in the Senate? Forty? Thirty-five?

On Tuesday afternoon, Republican senators completed a grim weekly lunch on health care. They spilled out into the Ohio Clock Corridor of the Capitol amid a sea of reporters.

A phone rang. Sen. Pat Roberts, R-Kansas, fiddled with his phone before realizing it wasn’t his. But that didn’t stop him from hamming it up for the cameras. He then pretended (we think) to take a call from someone important.

“Oh. A better approach is to get the hell out of here,” Roberts said into the phone before disappearing into the Senate chamber.

Perhaps that’s what a lot of congressional Republicans will want to do if health care and tax reform remain stunted.