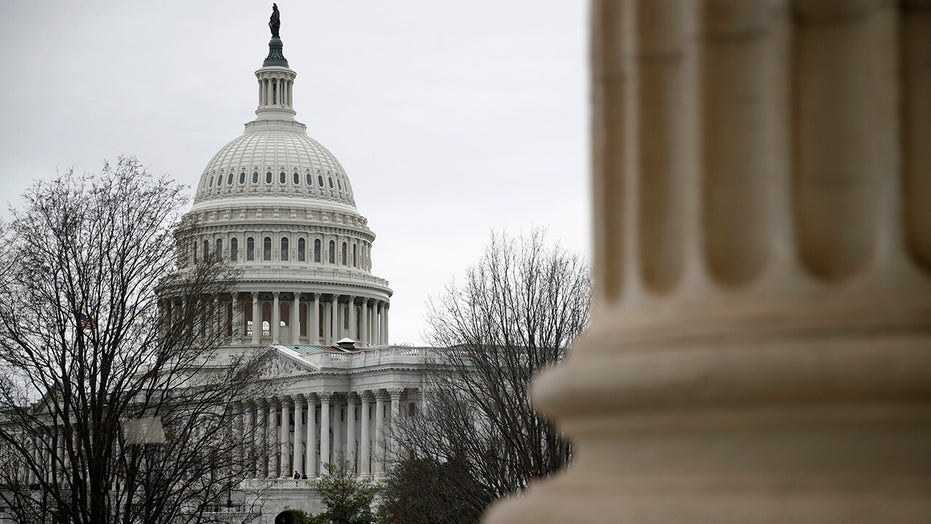 Where Congress is with the 'big' economic recovery package

White House officials and congressional lawmakers are signaling they will attempt to push through a third coronavirus spending package worth hundreds of billions of dollars even as the Senate works to move along the more modest second relief bill that focuses on leave for workers and expedited testing for the disease officially known as COVID-19.

Fox News has learned that the White House specifically is pushing an $850 billion stimulus, largely in the form of tax relief measures.

Roughly $500 billion of this would be tied to a payroll tax cut, while $250 billion would come in the form of Small Business Administration loans and another $58 billion would be directed to the airline industry, among other measures.

Treasury Secretary Steven Mnuchin will attend the Senate GOP's weekly policy lunch Tuesday -- which will take place in a larger room that it usually does so the senators can practice social distancing -- to discuss the details of the comprehensive coronavirus proposal from the White House.

"I’m not going to comment on the numbers now. But it’s a big number," Mnuchin told reporters Monday night.

CAN NEWBORN BABIES CONTRACT CORONAVIRUS AND PASS IT TO OTHERS?

Meanwhile, Senate Democrats will hold their weekly lunch via conference call instead, with Senate Minority Leader Chuck Schumer likely going over the details of a huge $750 billion proposal he announced Monday "to wage war against coronavirus and the economic crisis facing Americans."

"As early as tomorrow, I will present a series of proposals to Congressional appropriators that Senate Democrats believe should be part of the next bill to address the coronavirus," Schumer said in floor remarks Monday. "In consultation with the ranking members of the committees of jurisdiction, we are proposing an immediate and initial infusion of at least $750 billion to wage war against COVID-19 and the economic crisis it is now causing."

BRIT HUME: TRUMP'S CORONAVIRUS RESPONSE A 'MIXED BAG,' NOT AT 10 OUT OF 10

Following President Trump's signing of an initial coronavirus-related spending bill worth $8.3 billion last week, the House of Representatives okayed a second bill early Saturday morning that it adjusted Monday to correct technical errors. The Senate is expected to act on the House proposal Tuesday and will need to approve both the original bill and the correction to avoid sending the legislation back to the House, which has a significant portion of its members out of town on their previously scheduled district work period.

Schumer said that his proposal will include expanded unemployment insurance and Medicaid funding, address strained capacity at hospitals, provide urgent assistance to small businesses, assist schools in transitioning to remote learning as more and more states close down their public schools for the foreseeable future, among other measures.

Sen. Elizabeth Warren, D-Mass., backed Schumer's call for a $750 billion arsenal to battle the coronavirus and its economic effects in an op-ed for CNN Monday.

"The US is heading toward a recession, and Speaker Pelosi has already announced plans for an additional emergency response package," she wrote. "This is the right approach. We must act quickly to enact a major fiscal stimulus package that wards off economic disaster."

It is unclear what exactly will be in Mnuchin's proposal to Senate Republicans but there is a chance there could be significant overlap with Schumer's ideas -- Mnuchin has been the White House's point person in negotiating with congressional Democrats and spoke with House Speaker Nancy Pelosi more than 20 times on Friday as she and the Trump administration hashed out the chamber's initial version of the second coronavirus deal.

In an interview with Chris Wallace on "Fox News Sunday," Mnuchin pitched "a big stimulus program because we need to help American workers now."

The Treasury secretary made clear, however, that he and the president are not asking for a bailout.

"If you're providing liquidity to good businesses that just need liquidity for 3 to 6 months," he said, "that's not a bailout."

Mnuchin continued: "Whatever we need, we are gonna get from Congress."

Other lawmakers have chimed in with ideas for how to combat the coronavirus and help Americans who are harmed by the virtual economic shutdown it is triggering. Sen. Mitt Romney, R-Utah, Monday proposed, among other things, providing every American with a $1,000 check to cover expenses they may incur due to layoffs, forced leave or other coronavirus-related expenses.

Rep. Tulsi Gabbard, D-Hawaii, came out with a similar proposal last week, introduced in a nonbinding House resolution, to provide each American with a monthly $1,000 payment until the coronavirus threat is over. She termed it a "temporary universal basic payment." Both her proposal and Romney's appear similar to former Democratic presidential contender Andrew Yang's universal basic income (UBI) idea, but are distinguished from it mainly because their ideas are temporary, stopgap measures.