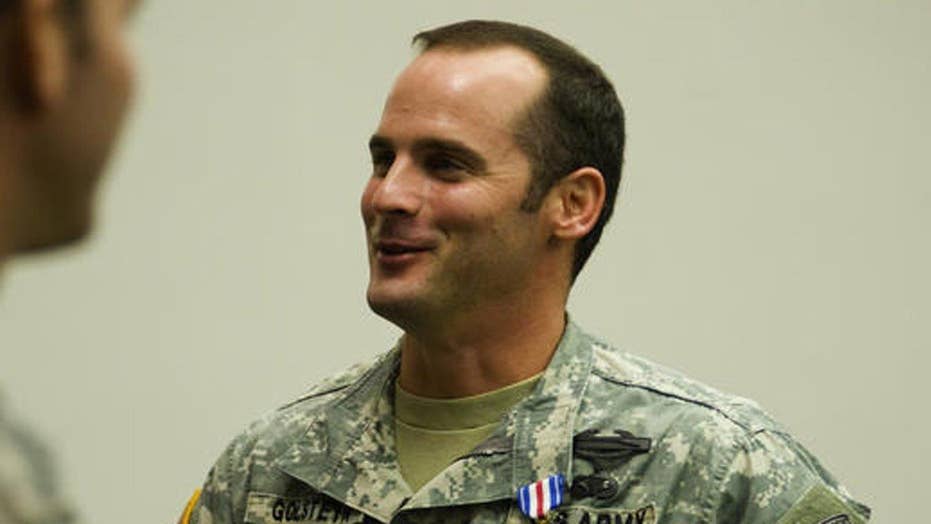 The Army renewed the investigation after the once decorated soldier admitted to killing a detainee during an interview; Jennifer Griffin has the details for 'Special Report'

The Army has reopened an investigation into a former Green Beret after he admitted during a Fox News interview that he killed a suspected Taliban bombmaker they had held in Afghanistan.

Maj. Mathew Golsteyn already had faced an initial investigation after acknowledging during a polygraph test he had killed the unarmed suspect. While that case was later closed, Golsteyn appeared on the Fox News special “How We Fight” in October and discussed the incident publicly.

The suspected Taliban member in question was held during the battle of Marja in February 2010. The suspect, though, was not on a list of targets U.S. forces were cleared to kill -- and after he was detained, Golsteyn said he refused to talk to investigators.

Under the rules of engagement, Golsteyn was ordered to release him.

However, Golsteyn, who was deployed to Afghanistan as part of 3rd Special Forces Group, was concerned that if he did so, the suspect would have in turn targeted Afghans who were helping U.S. soldiers.

“There’s limits on how long you can hold guys,” he told Fox News' Bret Baier. “You realize quickly that you make things worse. It is an inevitable outcome that people who are cooperating with coalition forces, when identified, will suffer some terrible torture or be killed.”

A senior U.S. defense official confirmed to Fox News on Friday that the Army has reopened its investigation based on new evidence that includes the Green Beret's public statements. The Washington Post first reported on the reopened probe.

“The fact that his case has been reopened, on the grounds it has, is more proof of a process that, even though intended to pursue the facts, can also be leveraged for retaliation,” Hunter wrote.

Golsteyn defended his actions during a phone interview with Fox News on Friday.

“I made a lawful engagement of a known enemy combatant on the battlefield,” he said, while also disputing characterizations that the Taliban suspect was a "detainee" since he was "never processed."

“We were told that protecting the civilian population was priority number one, even at the cost of our own lives. I did that,” he said.

The earlier Army investigation was undertaken after Golsteyn disclosed details of the incident during a polygraph test when he was interviewing for a job with the CIA in 2011.

According to Army documents obtained by The Washington Post through the Freedom of Information Act, Golsteyn told the CIA he “had no qualms” about killing the man “because he couldn’t have lived with himself if (the alleged bombmaker) killed another soldier or marine.”

Golestyn reportedly described taking the bombmaker off base, shooting him and burying his remains in a shallow grave. He said he and two other soldiers dug up the remains and burned them in a pit used to dispose of trash.

“We hashed all of this out with the Army a year and a half ago. I don’t have anything that I am ashamed of," he told Fox on Friday.

“It’s dangerous to take combat out of its context. Combat is a horrible thing. You can take anything and make it sound uncomfortable," he added.

Golsteyn, who had been awarded the Silver Star, the military’s third-highest award for combat valor, was initially accused of murder and conspiracy. Following a lengthy investigation by a military tribunal, no formal charges were filed.

Instead, Golsteyn was removed from the Special Forces and had his Silver Star taken away.

In an email to The Washington Post, Golsteyn said he was “frustrated, but not terribly surprised” the Army reopened its investigation. He added that the Defense Department and Army had “viciously pursued” him “without a discernible cause or a stated goal for over five years.”

No other service members would testify against Golsteyn, even when they were offered immunity from prosecution.

“Golsteyn is an American hero – a true warrior, in fact. Why the Army is hell-bent on destroying a combat hero’s career is truly astonishing,” Hunter wrote, adding that the Army has “the ability to fix this stupidity.”

Army spokeswoman Lt. Col. Jennifer Johnson reportedly said in a statement that it would be “inappropriate to comment further regarding an ongoing investigation.”