The go-slow approach is personified by House Speaker Nancy Pelosi, with whom Ocasio-Cortez has had an often contentious relationship since the freshman lawmaker arrived in Washington just eight months ago.

The New York Democrat told her more than 5 million Twitter followers late Saturday that the Democrats’ “refusal” to seek the removal of the president was a “bigger national scandal” than what she alleged was the president’s “lawbreaking behavior.”

JUSTIN HASKINS: ALEXANDRIA OCASIO-CORTEZ PROVES AGAIN SHE HAS NO IDEA WHAT SHE IS TALKING ABOUT

Calls for impeachment have grown louder from some Democrats in the wake of last week’s news that a purported “whistleblower” had expressed concern about a phone call said to have taken place between President Trump and the leader of Ukraine, in which Trump allegedly sought information about 2020 Democratic frontrunner Joe Biden, whose son Hunter Biden had business dealings in Ukraine.

Soon after Ocasio-Cortez posted her Saturday comment, she received a response from James Fallows, the noted author, journalist and former speechwriter for President Jimmy Carter, who asserted that Ocasio-Cortez was overstating the case in criticizing members of her own party for exercising restraint regarding impeachment.

“IMO, this is ‘false equivalence’ of its own sort,” Fallows wrote. “What Trump is doing remains objectively the biggest threat, scandal, and problem.

“Second-ranking: the silent acquiescence of the GOP Senate.

Ocasio Cortez doubled down in her response to Fallows.

“It is one thing for a sitting president to break the law,” she wrote. “It’s another to let him.

“The GOP’s silence & refusal to act shouldn’t be a surprise. Ours is.”

Ocasio-Cortez’s online outburst followed remarks earlier in the day by fellow progressive and 2020 presidential candidate Sen. Elizabeth Warren, D-Mass., who took a veiled shot at Pelosi, the standard-bearer among Democrats of a “wait and see” approach regarding potential action against the president.

"Donald Trump did everything he could to obstruct justice,” Warren said at an event in Iowa. “I read all 448 pages [of former Special Counsel Robert Mueller’s report on the Russia investigation] and when I got to the end, I called for the impeachment of Donald Trump.

“Congress failed to act,” Warren added, “and now Donald Trump has shown that he believes he is above the law. He has solicited another foreign government to attack our election system.”

Just over a week ago, Pelosi had lashed out at reporters when they repeatedly asked her about impeachment at a news conference.

“That’s the only question, that’s all I’m going to say about this subject, and there's nothing different from one day to the next,” she added. 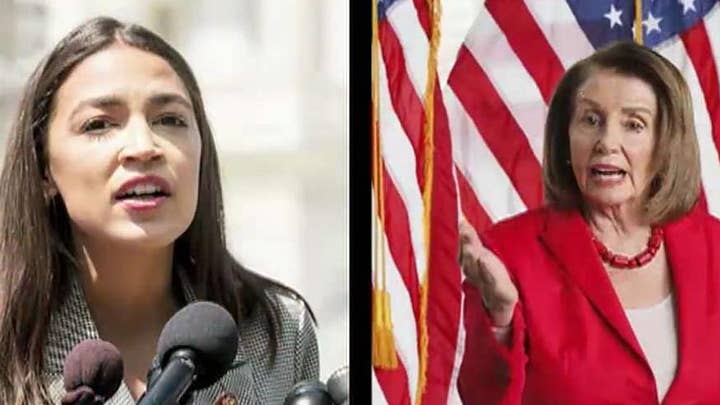 The struggles experienced by the 79-year-old Pelosi, a three-decade member of Congress from California, have included frequent clashes with Ocasio-Cortez, 29, and other progressive – and aggressive – young lawmakers who were swept into office during last year’s midterm elections. The progressives’ push for far-left policies, including Ocasio-Cortez’s Green New Deal, as well as their vocal opposition to President Trump, have been at odds with the moderates’ typically lower-key approach to getting things done.

Pelosi and Ocasio-Cortez appeared to reach a truce of sorts after a closed-door meeting in July, in which both sought to ease infighting that some Democrats viewed as counterproductive. The meeting was soon followed by the departure of Ocasio-Cortez’s chief of staff, Saikat Chakrabarti.

But with Ocasio-Cortez’s Twitter posts that began late Saturday, it appears the truce with Pelosi – at least regarding impeachment – may be over.