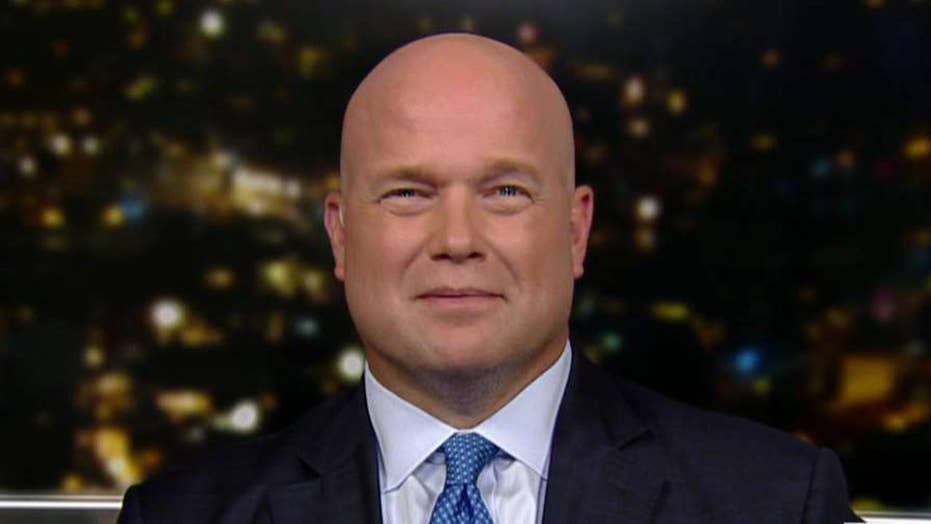 The Deep State tried to use an illegitimate tool to throw up a smokescreen to distract the American people from President Trump's success, says former acting Attorney General Matt Whitaker.

Republicans in Congress defended President Trump on Friday after a report said a "whistleblower" filed a complaint over an apparent July phone call between the president and the leader of Ukraine, blasting the allegations as "highly partisan."

“It’s not like we haven’t seen this movie before," U.S. Rep. Jim Jordan, R-Ohio, told the Washington Post. "Democrats come out, they’re all spun up, Adam Schiff makes all kinds of statements, and then when the facts come out -- Whoa, different story!

“This seems to be the same kind of deal," Jordan added.

“It’s not like we haven’t seen this movie before. Democrats come out, they’re all spun up, Adam Schiff makes all kinds of statements, and then when the facts come out -- Whoa, different story!"

U.S. Rep. Mark Meadows, R-N.C., echoed the idea that such complaints hamper the president in his work.

“It would have a real chilling effect on dialogue between important leaders if they think that every time someone who overhears a conversation that wasn’t even party to the conversation is going to file a whistleblower complaint and it’ll end up on the front page of periodicals across the country,” Meadows said, according to The Post.

“The fact is, the president, to quote John Marshall, is the ‘sole organ’ of U.S. external relations and has to have conversations in confidence with foreign leaders," he said. “There’s no practical way to conduct diplomacy without it.”

“The fact is, the president ... has to have conversations in confidence with foreign leaders. There’s no practical way to conduct diplomacy without it.”

But he added he’s in favor of transparency.

The administration is also taking flak for not sharing the complaint with Congress.

Most Republicans avoided commenting on the complaint, and while a few did express concerns, they were limited.

Rep. Patrick Toomey, R-Pa., said it would be “wildly inappropriate” for a president to ask a foreign government to get involved in a U.S. election, but added he isn’t accusing Trump of doing that.

Rep. Chris Stewart, R-Utah, a member of the House Intelligence Committee, broke with Republicans in saying some on his side of the aisle might join Rep. Adam Schiff, D-Calif., in subpoenaing the president's phone records.

“It’s certainly on the table,” he said. “When I say that I want to protect congressional oversight, I really mean that.”

Trump has denied any impropriety and in a Twitter message Friday, he called the unidentified whistleblower "highly partisan," The Post reported.