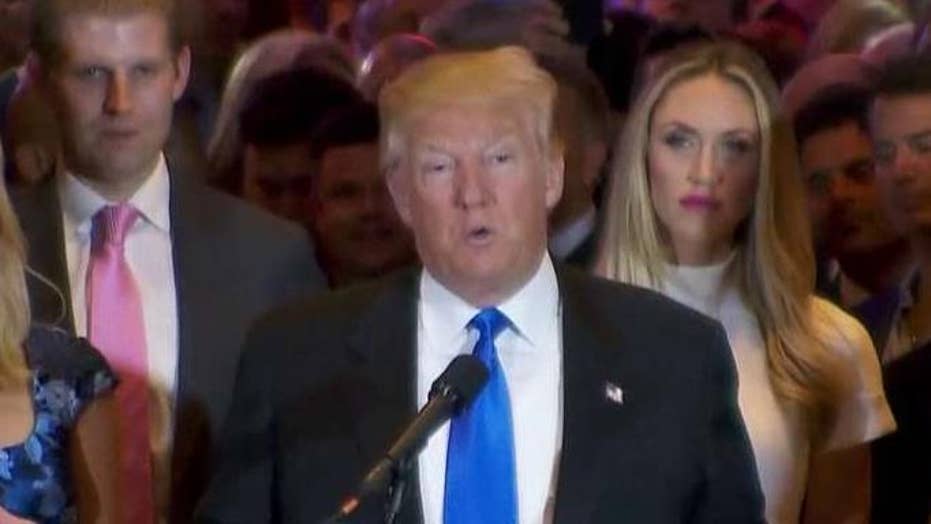 Buzz Cut:
• Anti-Trumps have the ‘why’ but lack the ‘how’
• Hillary hack attack
• Trump and the RNC start merger
• Ground down
• The number you have reached is in police custody

ANTI-TRUMPS HAVE THE ‘WHY’ BUT LACK THE ‘HOW’
A Republican Nebraska senator caused rather a stir with his unambiguous refusal to back his party’s presidential nominee.

Ben Sasse took the first steps Wednesday in the beginning of what could become a new political party.

He called for a candidate deserving of the trust of the electorate and vowed never to vote for either Donald Trump or Hillary Clinton.

Leave aside for now the fact that this idea maintains the consistent problem with the anti-Trump effort on the right: a lack of a unifying figure to consolidate support. You can’t beat somebody with nobody.

But even before you get to the question of “whom” you have to ask two other things: “Why?” and “How?”

Political journalism, political science and political professionals are always inordinately focused on the last question. We want always to know about staffing and data and infrastructure and of course, polls. That’s not to say that these things don’t matter. But they ought to come second in our considerations.

As Trump has proven, reasons are more important than means. Trump has run, whether you like them or not, an ideas campaign. An immigration crackdown, protectionist trade policies, isolationist foreign policy and increased domestic spending may not all be on the agenda in Davos next year, but they are ideas with the support of tens of millions of Americans.

Analysts have often dismissed Trump as a no-substance clown -- and certainly his movement is more attitudinal than ideological -- but that misses the potency of the ideas that fueled his rise.

And on the other idea that propelled the GOP nominee in waiting, Trump and Sasse actually agree: The Republican Party is a bad joke.

Sasse and others who vow never to support Trump rest their argument on the fact that a party that would select Trump is badly broken. Perhaps beyond repair.

The polls and forecasts that show Trump going down in a devastating defeat provide a good rationale for the NeverTrump crew, but not a sustaining one. If the reason to oppose Trump is because he is a general election disaster, then what will his opponents say if he starts leading in the polls or becomes competitive?

Remember Trump’s gift for turning dross into gold with polls. He flogs the results of unreliable surveys that show him ahead to create the sense of possibility and momentum. #Winning!

But at least for now, conservative opposition to Trump can be excused on the grounds that Trump is so far behind that their support for the GOP nominee is immaterial anyway. He’s losing with or without them. That may not always be so.

The actual reasons for a divorce on the right are based on ideology and character. Those can be sustained. Conservatives mostly, and in some cases, fundamentally, disagree with Trump’s core platform. And across the broad right-of-center spectrum there are many who believe Trump is personally unfit for office.

And just as with Trump’s platform, say what you will about the core tenets of anti-Trumpism, at least it’s an ethos.

Having explained “why,” we should consider the question of “how.”

And that’s where new parties and movements fall apart. Politicos may focus too much on the importance of mechanics, money and process, but they are the leading causes of death for political campaigns. Without a suitable vessel, the best ideas and candidates just don’t matter.

Whether or not Sasse himself ends up being the anti-Trump candidate despite his abjuration, he is at least now the leader of the movement to find one -- whether he likes it or not.

The money and organization required to gain access to enough state ballots to make a difference are staggering. Without a billionaire like Michael Bloomberg or Trump, that means finding funding fast. But as Trump is now finding out with Republican donors, political money comes at a high price.

Moreover, the right money from the wrong donors can taint a candidate or a movement. The NeverTrump movement could quickly be defined by its benefactors. A broad consortium would be the best.

But even if they could raise the money, finding the staff and volunteers would be made much harder since participation in the movement would mean immediate excommunication from the GOP. And since the odds of winning would be so long, you’d be asking people to go on what amounts to a suicide mission.

Now, given how much benefit a non-Trump option for conservatives would provide to down-ballot candidates, some of the establishment backlash might be mitigated. If a fifth of the Republican electorate sits out this election the losses for the party on the local, state and congressional level would be titanic.

That mitigation aside, the effort looks so daunting as to seem impossible. But impossible or not, it is now certainly underway.

They have the “why” but Sasse and the Trump resistance had better figure out the “how” on the double.

WITH YOUR SECOND CUP OF COFFEE…
One woman shares her reflection of how music kept her grandparents connected when her grandfather was imprisoned in a concentration camp in 1944. Despite his death in the camp, the concerts that were arbitrarily played on the radio by the Nazi guards were also listened to by his wife in their home and mentioned in their letters to one another. NYT: “What music might have served as a bridge between a bunk in Block 59 and the bourgeois living room of his family’s Hamburg villa, where my grandmother now did her best to raise two young boys on her own amid frequent air raids? I was moved by the notion of music as a kind of telepathic conduit between two lovers separated by fate. In some ways, it seemed so modern, similar to the late-night requests to radio stations for songs dedicated to faraway sweethearts. Today, in the age of streaming, on-demand listening, that sense of music as a public space, capable of sheltering secret trysts, seems to be vanishing.”

HILLARY HACK ATTACK
Fox News: “The infamous Romanian hacker known as ‘Guccifer,’ speaking exclusively with Fox News, claimed he easily – and repeatedly – breached former Secretary of State Hillary Clinton’s personal email server in early 2013. ‘For me, it was easy ... easy for me, for everybody,’ Marcel Lehel Lazar, who goes by the moniker ‘Guccifer,’ told Fox News from a Virginia jail where he is being held. Guccifer’s potential role in the Clinton email investigation was first reported by Fox News last month. The hacker subsequently claimed he was able to access the server – and provided extensive details about how he did it and what he found – over the course of a half-hour jailhouse interview and a series of recorded phone calls with Fox News. Fox News could not independently confirm Lazar’s claims.

In response to Lazar’s claims, the Clinton campaign issued a statement Wednesday night saying, ‘There is absolutely no basis to believe the claims made by this criminal from his prison cell. In addition to the fact he offers no proof to support his claims, his descriptions of Secretary Clinton’s server are inaccurate. It is unfathomable that he would have gained access to her emails and not leaked them the way he did to his other victims.’”

The Judge’s Ruling: Hillary’s secret weapon - Senior Judicial Analyst Judge Andrew Napolitano debunks the defense by Bill Clinton of Hillary Clinton’s exposure of secret government material on her private server because the secrets were not marked secret when she saw them: “His argument is unavailing for two reasons. The first is that it is untrue. Emails are confidential, secret or top-secret at the time they are created, whether marked or not. The second reason is that Mrs. Clinton signed an oath on her first full day as secretary of state…In that oath, she acknowledged that she had an obligation to recognize and protect state secrets on the basis of the sensitive nature of the information contained in them -- whether they bore classified warnings or markings or not.” Read more here.

TRUMP AND THE RNC START MERGER
WSJ: “Facing a prospective tab of more than $1 billion to finance a general-election run for the White House, Donald Trump reversed course Wednesday and said he would actively raise money to ensure his campaign has the resources to compete with Hillary Clinton’s fundraising juggernaut. His campaign also is beginning to work with the Republican National Committee to set up a joint fundraising committee after his last two rivals—Texas Sen. Ted Cruz and Ohio Gov. John Kasich—dropped out in the wake of Mr. Trump’s resounding Indiana win on Tuesday.”

Ground down - Fox News’ James Rosen reports that compared to Hillary Clinton’s sizable ground game efforts, the presumed Republican nominee comes up short: “Clinton’s reported $5 million technology and data mining operation, built upon the pioneering digital apparatus of the Obama campaigns, is allowing her to micro-target swing voters down to their purchasing, reading and media-consumption habits. From an original launch team of dozens in her Brooklyn headquarters, Clinton’s paid staff has expanded to nearly 800 people, operating out of offices in 28 states…The real estate mogul, by contrast, reportedly has a campaign staff of about 100 people, a skeletal infrastructure with no sizable communications team, digital operation or research division.”

Trump says he’s open to a Cruz VP - The Hill

What do vulnerable Republicans in Congress say about Trump? - Roll Call

THE NUMBER YOU HAVE REACHED IS IN POLICE CUSTODY
WCMH: “Police in Alliance [Ohio] would like prospective drug purchasers to stop calling a suspected drug dealer’s phone so that they can search the device without being interrupted. Police arrested Steve Notman Tuesday night after they say he was seen on video selling methamphetamine. Police are trying to search through texts and contacts, but they say that the constant stream of calls and texts is ‘really annoying.’ In a very tongue in cheek Facebook post, police said, ‘First of all, he is all out of drugs for tonight. Secondly you don’t need to call – we will come to you soon enough.’ Police also say Notman’s ringtone is terrible.”

AND NOW A WORD FROM CHARLES…
“If [Trump] can choose a cabinet with people of stature and reassurance, you get somebody who is respected in the party with a long history and he’s going to be Secretary of Defense or she’s going to be, then that not only reassures you about the policy, but also it’s a nod from that respected individual that Trump is going to be okay. That could be a very effective employ.” – Charles Krauthammer on “Special Report with Bret Baier.” Watch here.