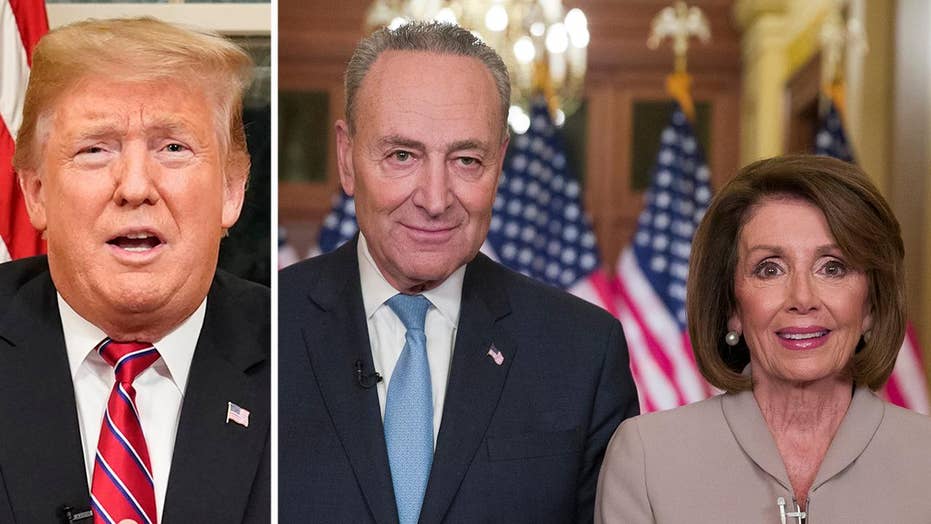 Trump, Democrats to resume border security talks at the White House after taking the debate to prime-time

As the partial government shutdown continues, a handful of Republican senators have broken with President Trump in demanding a spending deal – even without funding for a border wall.

The White House and Republicans have been at a standstill with Democrats over a spending bill – all hinging on funding for a wall along the U.S.-Mexico border.

“The Democrats could solve the Shutdown problem in a very short period of time. All they have to do is approve REAL Border Security (including a Wall), something which everyone, other than drug dealers, human traffickers and criminals, want very badly!” Trump said in an early January tweet.

Democratic leaders, however, have accused Trump of trying to “manufacture a crisis, stoke fear and divert attention from the turmoil in his administration” in his push for more than $5 billion for a border wall.

As the shutdown nears its third week, here is a look at some Republican senators who have broken with Trump on how to end it.

Colorado Sen. Cory Gardner, a Republican, was the first who called for the Senate to approve legislation to end the partial shutdown – even if it does not include the more than $5 billion Trump has demanded for the border wall.

“I strongly support efforts to take further action to increase funding for border security and begin to fix our broken immigration system. That said, I don’t believe shutting down the government is the best course of action. Instead, we should fund border security, end the partial government shutdown, and then continue to fight to get even more border security funding in the long term,” Gardner said in a statement provided to Fox News.

As the partial government shutdown neared its third week, Alaska Sen. Lisa Murkowski contended some facets of the government should open even without a deal on border wall funding.

The Trump administration assured tax refunds would still be sent out despite a partial shutdown, Fox Business reported.

Sen. Susan Collins, R-Maine, showed support earlier this year for House legislation that would have kept the government open without funding the border wall.

“My goal is to get the government reopened as fast as possible. And six of those bills, we’ve got agreements on and so I’d like to see those signed into law,” she said of the House bills, according to Politico.

“I’m not saying their whole plan is a valid plan,” Collins has also said. “But I see no reason why the bills that are ready to go and on which we’ve achieved an agreement should be held hostage to this debate over border security.”