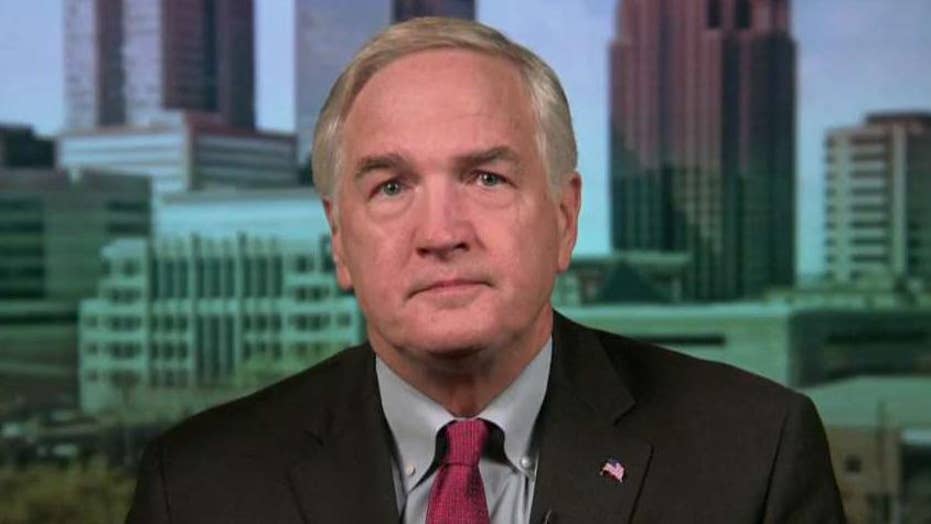 Strange: If I were part of the Swamp, Trump wouldn't back me

President Trump claimed his favored candidate is gaining steam as he urged voters to back GOP Sen. Luther Strange in Tuesday's Alabama Senate race, though some of the president’s top allies are backing former state Chief Justice Roy Moore and claim the energy of populist conservatives is on their side.

Strange has trailed Moore in all recent public polls for the Republican primary runoff. But Trump argues Strange is closing the gap thanks to his support.

“Luther Strange has been shooting up in the Alabama polls since my endorsement,” Trump tweeted Tuesday. “Finish the job - vote today for ‘Big Luther.’"

As polls opened in Alabama on Tuesday, the president reiterated his support for Strange, who has spent the campaign arguing he would be an effective warrior for the president’s agenda in the Senate.

“ALABAMA, get out and vote for Luther Strange - he has proven to me that he will never let you down!” Trump tweeted.

"I want to be on the offensive with the president and vice president," Strange told "Fox & Friends" on Tuesday morning.

Strange also has the backing of Vice President Pence, who campaigned for Strange on Monday, and Senate Majority Leader Mitch McConnell. Strange, assisted by millions from the McConnell-aligned Senate Leadership Fund, has outspent Moore by a nearly 5-to-1 advantage on television.

Trump, who is tremendously popular with Republicans in Alabama, flew to Huntsville on Friday for a campaign rally for Strange to try to inject a jolt of energy into his campaign.

But Moore has been endorsed by a slew of usual Trump supporters, including former chief strategist Steve Bannon, former Alaska Gov. Sarah Palin and conservative members of the House of Representatives.

As Pence campaigned for Strange in Birmingham on Monday evening, Bannon stumped for Moore during a Fairhope rally. During the event, Bannon, making his first campaign appearance since leaving the White House last month, said a Moore victory would show that “this populist, nationalist, conservative movement is on the rise."

Though Trump is backing Strange, Bannon also argued a Moore win would benefit the Trump agenda.

"A vote for Roy Moore is a vote for Donald J. Trump," Bannon said.

Strange, the former attorney general in Alabama, was temporarily appointed to the seat in April after Attorney General Jeff Sessions joined the Trump administration.

Moore, known in Alabama as the “Ten Commandments Judge,” is a Christian conservative who is famous for having been removed twice from his position on Alabama’s Supreme Court.

The winner of the GOP runoff will face Democrat Doug Jones, a former U.S. attorney under the Clinton administration who was endorsed by former Vice President Joe Biden. Both Trump and Strange are arguing that Jones would have an easier time in the deep-red state in a general election if Moore wins.

Vice President Joe Biden has announced plans to campaign for Jones in Alabama in October.